Catapulted from his normal, boring, mundane life and into a world of violence, gods, and what seems to be utter chaos with no idea who to trust or even what is going on – Leon did not have a great vacation.

Taking a few days away from his busy but boring life, Leon just wants to camp a few days in the woods and chill out. Unfortunately, he dies. What happens next isn’t much better. After plummeting to the freezing earth from the sky, promptly finding a dead and decaying corpse, being rescued, betrayed, befriended, and fed a mystery meat stew – his first day in this new place has not gone well.

The great religions of this world, throughout Earth’s history, have all been watered down versions of the true gods, and their role in humanity different from anything books and myths might say. They aim to prepare humanity for what will come after they abandon us. Our gods, here in this dimension, want us to live happy and peaceful lives. Gods from other dimensions do not.

In the world Leon finds himself in, what killed you in our world defines your ‘conquest’. Your conquest can be things abilities like healing or impervious skin, conquests can be leveled up through conquering what caused your death or defined your life. Conquests can also be taken, and so those who hunger for power will hunt and buy desirable conquests. With everyone out for their own, dark gods and demigods vying for power, and all-consuming darkness coming – Leon and the resistance have the odds stacked against them.

This story is complex, with multiple systems of nature to consider and fantastically multifaceted characters. James Robertson has managed to create characters that are reflective of humanity, characters completely devoid of it, and the tricky ones in between. Afterworld is the first in a series (Next Life) and it sets a cracking pace for the ongoing story, with terrific action and some pretty graphic detail. The story incorporates philosophical moral discussion without getting weighed down in argument but instead utilizes the outcomes for the plot – leaving the moralizing to the reader.

Fans of dystopian fantasy and sci-fi will have something to love here, mixing elements from different genres works particularly well in this story and applies a macabre logic to the afterlife created by Robertson.

A fast-paced and action-packed dystopic sci-fi fantasy, Afterworld is less of an adventure more of a quest – one you can’t help but want to finish. 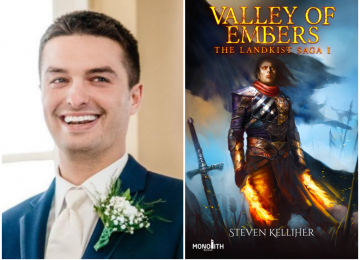 Steven Kelliher - A New Breed of Epic Fantasy
FEATURED AUTHOR - Steven is a former full-contact kickboxing and karate champion. A former sports and entertainment writer, he now focuses exclusively on his true passion: epic fantasy and action sci-fi. He wishes all disputes were still settled with a friendly game of hand-to-hand combat, is a fan of awesome things, and tries to write books he'd want to read. He hopes you like them. As our Author of the Day, he tells us all about his book, Valley of Embers.