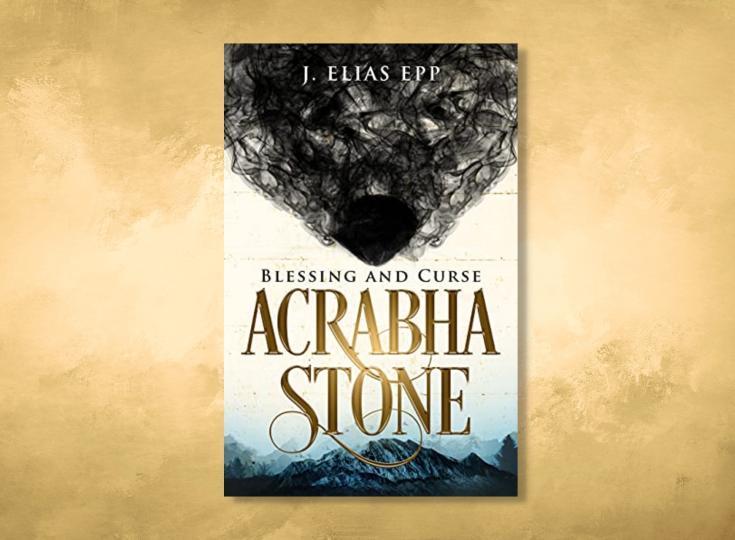 Rylen is a young man who lives and works at his adoptive father's inn in the town of Edge. As an Eran, Rylen is used to being an outsider, but what he doesn't know is that the man who raised him, Hyrestl, is cursed and that fate has big plans for both of them.

Blessing and Curse: Acrabha Stone is the first book in a new fantasy series by J. Elias Epp. The story opens with a man named Hyrestl trying to make his way through the massive stone gates of Tarawa Pass. Unfortunately, it soon becomes clear that Hyrestl is suffering from a curse that prohibits him from making the journey that he has desperately been trying to complete numerous times. Instead, his fate appears to be bound to Rylen, the Ara-Eran teen he has been raising.

However, Hyrestl is not the only one yearning for something he lost long ago. As an Aran-Eran, Rylen is despised by most people because of a war that took place twenty years prior. Although Rylen had nothing to do with the war and peace had officially been declared between the Gwyanians and the Erans, old wounds still run deep. While Hyrestl struggles to understand the curse that keeps him from his real family, Rylen is also desperate to find his own people. So when Rylen decides to try and leave Edge forever during the Sun Festival, it sets in motion a chain of events he could never have imagined.

Rylen and Hyrestl are both compelling characters but are not the only participants in the deadly tangle that ensues. The primary antagonist in the tale is a sinister man named Harbiya who desires to improve his standing with the other lords. However, accomplishing this involves finding something called the "King's Desire," which leads him to the town of Edge. The supporting cast, which includes a young boy named Pahanna and a priestess named Leyla, is also fully fleshed out.

Blessing and Curse has all the action, drama, and intrigue of a good fantasy novel along with some great world-building. As this is the start of a new series, it doesn't spell out everything but provides readers with enough information to draw them in. It is set in a world where both magic and dragons are real, but people still struggle with relatable issues such as wanting to belong or yearning for family. Even though it includes some common fantasy themes, Blessing and Curse manages to tell a fresh story without resorting to cliches and predictable tropes. However, the story does throw out just as many new questions as it provides answers. This means readers will have to continue the adventure along with Rylen and Hyrestl in subsequent novels if they want to know how it will all play out.

Overall, Blessing and Curse is an excellent start to what looks like a promising new fantasy series. The first book in a series, especially in the fantasy genre, always walks a fine line between introducing readers to new worlds, concepts, and characters without overwhelming them or revealing all the secrets too soon. Thankfully, Blessing and Curse manages to pull this off and set everything up for an even more epic tale.