Editorial Review: Hidden from Our Eyes by James A. Fisher

Editorial Review: Hidden from Our Eyes by James A. Fisher
Posted on 6th of May, 2020 by Meg Stivison 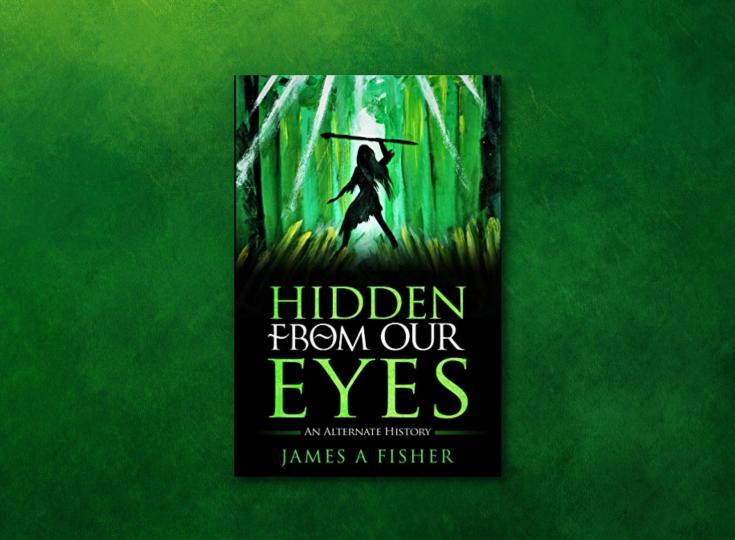 When Tom Hathaway, an aspiring pilot in the 1970s, hears a mysterious voice, he steps through an archway into a different timeline. Although this new world shares all the geographical features of Tom’s world, the language, culture and history are quite different. Hidden From Our Eyes, by James Fisher, explores Tom’s adventures in this intriguing alternate history.

The world-building is intriguing, with a readable blend of imagination and historical research. The locals don’t speak English, and it appears that British colonists never arrived to build colonies and plantations in what we’d call Virginia and North Carolina. Instead, Tom’s new home is a mix of cultures, with indigenous tribes living and working together, as well as travelers and long term residents from Europe. In this timeline, the descendants of Viking explorers live in controlled settlements, almost like reservations, on indigenous land. Local Native tribes prevailed, blending traditional beliefs with near-modern technology.

Many of the places are slightly altered versions of familiar ones. Basic cultures and languages are recognizable, although different nationalities were the victors. For example, instead of English, residents of the Scottish-ruled British Isles now speak versions of the languages that influenced our English, for reasons that are clear and logical in the book’s internal consistency. There are many more of these intriguing departures for readers to discover.

The actual plot is secondary to discovering this fascinating alternate history. Still, there’s a lot to enjoy in Tom’s ingenuity, sometimes reminiscent of the Mark Twain classic A Connecticut Yankee In King Arthur’s Court. His difficulties and successes in adapting to all the changes of a new life make him a sympathetic hero. At first, he’s mostly concerned with learning the language and subtly discovering their history, but soon he starts to question what has brought him to this alternate timeline and whether he can someday return to his mother and brother, or at least let them know he’s alive. As he connects more with his new home, he must prove himself as a warrior here. Readers will also root for Tom as he sets his mind and his ingenuity to “inventing” a flying machine, matching his dream back in the American seventies.

Tom himself is thoroughly seventies, singing Carpenters’ songs to impress a girl and comparing himself with handsome Olympic athlete Bruce Jenner. There are occasional word choices, like Indian and half-breed, that serve to set Tom more firmly in the seventies mindset, although modern readers might cringe a bit. In general, Tom’s familiar seventies references are charming counterpoints to this strange new world.

It’s worth noting that there are interesting and developed women characters in this novel, something that’s often overlooked in science fiction. Particular standouts are Kimileah, a spirited young girl who Tom rapidly “adopts” as his new little sister, and Sorella Lulu, the mission's schoolteacher who helps Tom master the language and answers his questions with teacherly patience. While Tom’s love interest is a bit too perfect to be interesting, Tom’s other relationships are lively and complex. Not every relationship is warm and friendly, which helped make Tom feel more human and made the world feel more believable. The story culminates in a satisfactory ending, while still leaving enough questions unanswered to whet the reader's appetite for a sequel.

This novel introduces a developed and fascinating alternate timeline. Readers will enjoy imagining and exploring this world along with brave Tom Hathaway.