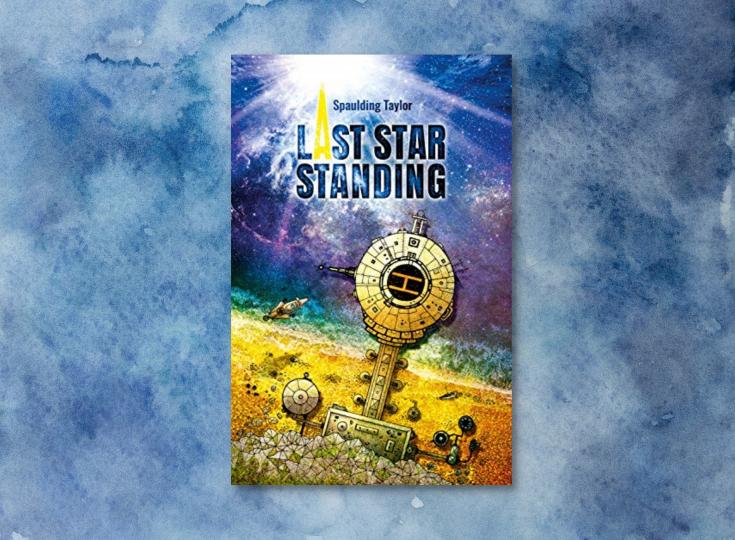 Spaulding Taylor’s response to the pandemic lockdown blues was to create Last Star Standing, a darkly comical dystopian tale of a future Earth so messed up that coronavirus seems a mere sneeze in the overall woes of world history.

Fast forward to the far end of this century and it’s not climate change but old-fashioned World War III that has battered the planet and eliminated much of humanity. Downunder, Australia was the least impacted. But, given jungle is taking over the cities, and there’s infestation by radiation-mutated giant rats of a metre (plus tail) and snakes of similarly oversized proportions, I’m not sure if the moniker of “lucky country” truly applies.

While humans have escaped mutation, they remain a deeply troubled society beset by racism and a horrendous disparity between those who have obscene wealth and those who try to eat the rats before they get devoured themselves. Sprinkle in bigotry, sexism and the rest of the worst of human behavior and the real surprise is why the Xirfell bothered to invade.

But yes, in the spirit of things can only get worse, Planet Earth is now ruled by vicious, narcissistic, and petty overlords who have swept across the galaxy destroying planets and enslaving an endless number of hapless alien species. They’ve brought along a vast menagerie of creatures with many legs, amorphous bodies, and weird capabilities and set them loose across the planet.

Some are useful enforcers or interrogators, others are handy servants, some are decorative, and one or two are troublemakers who probably should have been left on their home planet. The arrogant Xirfell, like a certain timelord Doctor, seems more fascinated in humans than other species and uses advanced technology, or traditional cross-breeding, to transform themselves into human-like form, albeit with slitted eyes and funky hair colors.

Taylor’s hero, Aiden, is a man trapped. Despite being adopted into a life of post-war, pre-invasion privilege, he cannot let go of the fact that he was abandoned by his mother and struggles with whether his half-Indigenous heritage impacts how others see him. He isn’t 100% over his affair with a half-human Princess who is the Xirfell King’s heir. Despite those lustful thoughts, he wants his girlfriend back; even though it was a fraught relationship. He’s also caught in the hamster wheel of unnecessarily heroic behavior and nose-thumbing reckless stupidity to prove his worth to the rebellion movement and that he’s better than his childhood adversary who is trying to steal his girlfriend and take control of the rebellion.

Oh, Aiden is also trapped in a chair, valiantly resisting torture with the help of aliens who sympathize with the plight of humanity. Until he spectacularly executes his own rescue and heads forth to kill the King, save the planet, and get his girl back. Along the way, he collects a motley crew of alien sidekicks with useful abilities for some rip-roaring adventures.

Fans of Guardians of the Galaxy will recognize Aiden as a kindred spirit to Peter Quill, Starlord thrill-seeker with a chip on his shoulder after his own abandonment and a determination to save the universe in a self-serving manner.

Taylor introduces inventive aliens with their own quirky characters from the desperate to be helpful fug, Bullivant, to the surprise package, Pavlina. She might be the size of a squirrel, but she packs as much attitude as Rocket Raccoon and saves Aiden’s heroic butt more than once.

There’s more than a hint of Marvel comic-book charm to this adventure, which will keep readers of the comic sci-fi genre avidly turning the page. Last Star Standing is also likely to prove popular with fans of Hitchhiker’s Guide to the Galaxy, Red Dwarf, or Futurama. With consistent pace, tone, and style throughout the book, readers can dive into the first few chapters and be confident that they’ll get plenty more action and adventure until the hero gets his chance to exorcise his Messiah complex and set the rebellion ablaze with the light of his newfound inner peace.