Two cousins, closer than sisters, plan to grow up and marry two brothers (or maybe two very close cousins) so they can keep sharing everything. This sweet closeness leads to a special, secret relationship between their sons, the twin cousins, and opens the story by showing how important secrets and family connections will be in Requiem: Origins.

In the beginning, though, the storyline is a bit jumpy. The reader is brought into dramatic scenes, again and again, with both physical violence and emotional turning points, long before much is shared about the characters facing these heightened moments. As the narrative jumps between these dramatic moments, readers may struggle to keep up with the characters and to figure out if these new characters had any connection to the last extremely dramatic scene, and if this was meant to be a jump in time or place between scenes

Characters are tossed into danger without giving the reader any time to empathize with or care about that character, creating a story that lacks emotional connection. With so little background on each group of new characters, It’s hard to care much about their obstacles or goals. Within a few pages, one character discovered she was pregnant, got engaged, and got trapped in a burning building… but, who is she, again? Without a chance to see a character’s personality, readers miss the emotional impact of all the danger and excitement.

By the second half, the narrative has found itself The scene switching is less jarring and these names become complex characters. Two brothers, Dhorian and Verdell, are in many ways the heirs to two close cousins in the opening scene. In each of their storylines, we see young men struggling against bad luck, large and small, and trying to take control of their lives. The twin cousins are very different, but both are ambitious and hardworking in their own ways. It’s easy to root for their successes.

Readers will care for Dhorian and Verdell and want their happiness. After a few missteps in bluntly telling readers what kind of people Dhorian, Verdell, and to a lesser extent, the aspiring politician Paul all are, the narration becomes more subtle, gently revealing their personalities and hearts. The omniscient narrator guides readers through Dhorian and Verdall’s choices, with a sweeping view over their memories, too. This look inside a character’s motivations helps to connect readers to these characters, and to show the intensity of their choices.

The novel explores intriguing, complex relationships and multifaceted loyalties. The theme of strong family connections returns again and again as the author carefully references the power of family expectations, even for secondary characters in minor storylines.

Overall, this book feels like a promising start. The disjointed drama of the beginning sets up developed conflicts and connections later in the book. After a rocky start, readers will enjoy getting to know Verdall and Dhorian, and thinking about family and independence. 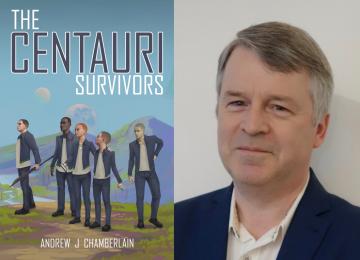 Andrew J Chamberlain - A First Contact Adventure Set in the Alpha Centauri System
FEATURED AUTHOR - Andrew J Chamberlain is a UK based author and writing coach. He has published books and short stories via the traditional and indie routes, and is the host of "The Creative Writer's Toolbelt", a podcast that gives writers practical advice and encouragement on the craft. In September 2017, he published "The Creative Writer's Toolbelt Handbook" a compilation of the very best advice and insight from dozens of professional writers, artists, and editors, from the podcast.