Skip to main content
Which are the trending topics in 2019 about Science Fiction.
Posted on 8th of January, 2019

Ryan Bailey
It is actually not too hard to predict what topics will be trending in science fiction this year, all you have to do is look at what topics sold the most last year and you can be guaranteed that there will be an army of clones following in their wake. Kidding aside, these are the topics that I personally think will be trending this year.

1 - Space Operas - Space operas used to be all the rage back in the glory days of science fiction and I think it is about time that they make a comeback. We've seen it happen with epic fantasy that has begun creeping back in after years of watered down fantasy, so there's no reason why space operas can't do it too. One of the novels that will kick things off is Tiamat's Wrath by James S. A. Corey. The Expanse series has been gaining popularity in recent years and the latest novel is dropping this year. Another space opera that is going to take 2019 by storm, in my humble opinion, is A Memory Called Empire by Arkady Martine. This is one of the novels I'm most excited about and ever since I saw the beautiful cover I can't wait to put it up on my shelf. I could keep going, but I'll just mention one more, Empress of Forever by Max Gladstone. This has been described as a feminist Guardians of the Galaxy meets Star Wars, which sounds pretty impressive to me. In true space opera fashion, it's going to have universe spanning action and plenty of really cool characters.

2. - Space Pirates - Yes, another topic that we haven't seen much of since the early days of pulp science fiction is space pirates, but I'm willing to bet my lunch that 2019 is going to see their triumphant return. This will mostly be thanks to Alastair Reynolds, who is dropping his Shadow Captain this year. I know it's going to be good because it is the sequel to the excellent Revenger, so be sure to read that one before Shadow Captain drops. It's going to have fearsome pirates and hidden treasure, which is all you need for a good space pirates story. Not to be outdone, Bennett R. Coles is dropping the first book in the planned Blackwood Virtue series this year, namely Windows of Marque. It's being described as Master and Commander in space as it features swashbuckling action and pirate raiders.

3. - Dystopian - Just in case I'm completely wrong about the other two topics, I'm going to fall back on trusty old dystopian science fiction for my last prediction. This genre has been going strong for years and shows no signs of stopping. I know that Jessica Brody and Joanne Rendell is dropping Sky Without Stars this year, which sounds like it ticks all of the dystopian science fiction boxes and then some. It is set on a French planet of all things and there is talk of revolution going round, so I'm pretty sure I know where this tale will be heading.
Replies (0)01/28/2019

Natalie
Interesting answer by Ryan up above, but I'm afraid that I'm going to have to disagree with almost everything they said lol. While I would have nothing against the genres they mentioned popping up again, I don't think we are going to see a big resurgence. Instead, these are the directions that I believe the science fiction genre is heading into for 2019 and beyond.

Politics - Yes, I know, science fiction stories has always been political, but I think 2019 is the year where it will really start to surge to the forefront again. We have already seen it beginning last year, with anthologies like "Resist: Tales from a Future Worth Fighting Against" as edited by Gary Whitta, Christie Yant and Hugh Howey. It features twenty-seven well-known science fiction authors contributing stories where they warn about what the future would be like if the world continues on its current political course. Not only are the stories very political, but the book is also used as a tool for political activism as proceeds from its sales went to the American Civil Liberties Union. This also brings me to the second trend that I predict for the science fiction genre this year.

Social Justice - Yes, I know that social justice and politics goes hand in hand, but books can also be about the one without veering too far towards the other. Not only are we seeing more marginalized authors rising to prominance in the genre, but the stories are also more focussed on ecomic and racial inequality. Once again, these are not topics that are new to science fiction, but for a while they were washed out by stories of robots and space ships and artifical intelligences. Movies like Black Panther and Captain Marvel are paving the way in cinemas, but I think books will carry the strongest messages.

LGBTQ Themes - There has long been a belief that the science fiction genre is aimed squarely at straight, male readership, but we have been seeing a large shift in recent years with things really taking off in 2019, I think. Science Fiction gives authors the freedom to tackle themes of sexual bias without being tethered to the heteronormative cultural assumptions that the world has been saddled with for so long. Authors like Joanna Russ, Charlie Jane Anders, Melissa Scott and others have long been vocal advocates for a more inclusive future for science fiction and I think this year and beyond will see the floodgates open even further.

These are just my personal predictions for what topics will be trending in 2019, but so far it looks like I'm right. It is certainly a very exciting time for fans of the genre as it is being wrenched away from the elite few who have been clinging to it and trying to stop it from evolving and shifting towards the masses.
Replies (0)07/15/2019
Please login or sign up below in order to leave an answer
LoginSign up 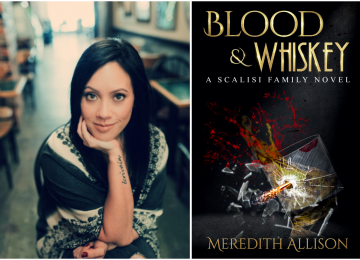 Meredith Allison - Murder, Bootlegging and a 1920s Showgirl
FEATURED AUTHOR - Meredith Allison is a writer (and reader) of many kinds of fiction, but in particular historical organized crime and dark thrillers. A native of Lincoln, Nebraska, she currently lives in Omaha. As our Author of the Day, Allison tells us all about her book, Blood & Whiskey.