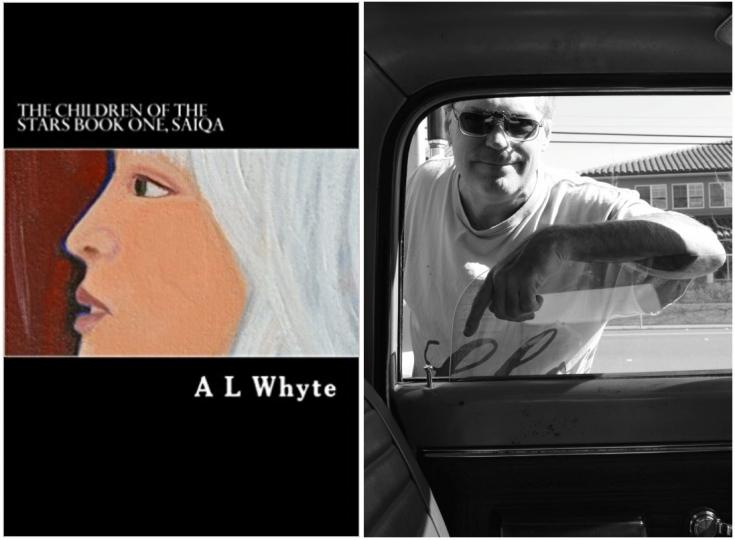 A.L. Whyte lives in Northern California. He is a performer that set aside his acting career around 2010 to make more time for his family: prior to that he had performed for Nickelodeon, Universal Studios, Image Films, Toyota, Apple and ILM, as well as semi-professional companies around Orlando, Florida and the Bay Area. He has written and published poetry and re-writes for Universal Studios stage productions. His derivative of Harry Nilsson's, 'Land of Point' is registered at the Library of Congress. After six and a half years, in his spare time, he finished, “The Children of the Stars, Book One, SAIQA." As our Author of the Day, Whyte tells us all about this book.

Please give us a short introduction to what The Children of the Stars is about.

The Children of the Stars; Book One, SAIQA is a science fiction novel that uses cutting edge science and projects it 400 years into the future: where is it applicable to people on a day-to-day basis. It is a story that uses longevity, magnetic field architecture, anti-gravity, advanced interplanetary space travel and an alien influence on a peaceful human society. The protagonists and a true AI begin to see the influence within some of the people in power and by the end of the novel, SAIQA, an AI, makes a rash decision and expedites the coming planet-wide conflict.

What inspired you to write about telepathy and a conflict between two immortal aliens?

As I wrote the novel I wondered what it would be like if an ancient race were to actually come and teach us its advanced sciences. It occurred to me that what we or any like society would do, given advanced or superior science, would greatly depend on the moral values of the people in power. In the novel I give a couple of examples of such societies that used this advanced knowledge strictly for the benefit of the people in power as their societies and even planets perished. The one immortal, Telas, learned that lesson and used his telepathy and knowledge to gradually push the ancient Sumer tribes toward creating cuneiforms or a written abstract language: thus allowing the humans their own intellectual epiphones. The other immortal, Nh’ghalu, refused to let go of the way of giving scientific knowledge outright. He tried to show the ancients that the heavens were full of stars, not gods. The ancient Sumer thought him a heretic and tried to kill him. Nh’ghalu being immortal could not die and tried to take vengeance on the primitive humans. Telas became aware of this and banished him from Earth. Nh’ghalu did teach advanced space technology to a primitive species on the other side of the galaxy. They are called the Nh’Ghareen. They were not socially mature enough to use the advanced science and destroyed their own planet. They are now an aggressive space-born species. Telas learned of this and banished Nh’ghalu into pure energy. After a thousand years Nh’ghalu persuades a multi-dimensional species to help him regain corporal form. Once he is reborn he has only one thing in mind; vengeance against Telas. That is where the novel begins. The inspiration is both biblical; in its good and evil, and empirical; as we humans, even though we progress, seem to repeat our mistakes often. In the novel a peaceful human society slowly, then quickly unravels as some of the people in power reach for more, regardless of collateral damage.

Why did you pick the year 2450 as the backdrop for your book?

I chose the far future because even though much of the science is fledgling most people would not believe it probable even within this century. The people who will live healthy to 150 have already been born. The people that will be cured of cancer, have been born. The lasers I talk about in the novel are being built right now. I have a science friend that asked me, “Why so far in the future?” Again, most people do not know and would not believe this science is coming soon. My justifications and thoughts about why I projected the story 400 years into the future are in the timeline of the novel. Even if all this science were to be established this century, most people would not benefit from it. Also, taking in to consideration, the major negative effects of climate change, and if it is not addressed soon, by the end of the century there will be wide spread famine, lost coastlines and countless wars as societies battle for depleted resources. As I said earlier, I chose the far future because I wanted the sciences to be applicable to people in their day-to-day lives. Today we take flying for granted; just over 100 years ago our grandfather’s grandfathers were fluttering around Kitty Hawk.

Tell us more about SAIQA.

Sanctuary’s Artificial Intelligence Quantum Administrator or SAIQA is the quantum computer that controls all the other Indy-Brain computers, as well as all functions of the giant spacestation Sanctuary. Unlike Indy-Brain computers which are made up of a mesh like combinations of synthetic silicone based neurons, SAIQA’s brain is a mesh of biosynthetic and organic neurons. All the future robotic brains are meshed in a way that they mimic a human brain and as such the neurons can communicate with each other and create the ability of a computer to learn. In the case of Indy-Brains, they learn and accept their existence within their environment. In the case of SAIQA, she learns and at some point begins to question her environment. There is a point in the novel where her mentor, Tfiti, tells a young SAIQA a bad joke and she laughs. It is the first time ever recorded of a computer laughing.

How did you go from acting to writing?

I spent a good part of my creative life acting, but the better part of my life being a father. There came a time when taking care of my growing girls was more important than nights out at rehearsal. The girls were supportive and had fun during my performing career, at one time I worked for Nickelodeon. Yet having them spend their evenings in the green room while I rehearsed, at one point just wasn’t what I wanted. I stopped performing and started writing. I was always writing, even if it was just a bit. I’ve published several poems. Acting in Northern California doesn’t pay very much so it was an easy decision.

Other creative skills include playing the guitar. I’ve written a couple of songs for my girls. Otherwise, my skill and abilities to understand most science has been good to me. I am the local nutritionist. Since I only promote alternative medicines based on existing science or well know clinical studies, (such as those from the Mayo and Cleveland Clinics), the people I help often come back and thank me. I started college as an aeronautical engineer. I never lost the need to satisfy the left side of my brain.

How much research did it take from you to make the science part of this book ring true?

It took me 6 ½ years to write book one; some of it because of outside work and most of it from research. I have bookmarked a folder called SAIQA, which consists of most of the sites I’ve researched; I intend to share them on my website in the future. Right now my focus is on book two, of which I am about 40,000 words into it.

Honestly, we all have advice to give to our younger selves based on our current experiences. I often thought, where would I relive or change a part of my life, and then I realize if I changed anything I may not have the two wonderful girls that are such an important part of my life. The only advice I would give my younger self would be to start writing this novel earlier, as it had been brewing in the back of my mind for some time.

There are many famous people I would love to meet and in some cases have met. While I was acting at Universal Studios I had the honor of being chosen to perform for an aging Jimmy Stewart and his wife. It was one of the highlights of my career. But, to answer the question, I would love to meet Jimmy Carter; because I believe him to be full of integrity and sincerity: I would also like to meet Stephen King, because his semi-autobiography, On Writing, was such a big influence on my writing.

I think, because of my acting experience, I was able to get into the minds of all my characters. I felt like each problem they resolved were decisions they would make. I enjoyed living their experience with them. So much so that in chapter eleven when a main protagonists perished I cried. Yet, I recall chapter two, when SAIQA remembers her birth, discovers that someone has tampered with her sensors, and strengthening her resolve, dives into her electron sea to seek answers; that chapter took one week to write. I remember thinking, “Wow, now I know what muse is.”

How is it that good people will let bad things happen?

I believe the majority of people to be good and only wish to live their lives in such a way that they can fairly provide for their families and others when they can. I see the self-centered, narcissistic, greedy people that grab power are often leaders we believe to have the better interest of people at large. When that turns out not to be so, people tend to get disenfranchised and stop participating in their government or societies, they isolate themselves. In book two one of the antagonists slams democracy as he pushes for the main antagonist to gain more power. I try to keep the story relevant and focus on the battle between good vs: evil, even within ourselves.

Do you have any interesting writing habits? What is an average working day like to you?

Most of my writing happens in the morning. I do write at my convenience as well, like downtime on plane trips. One of the things Stephen King’s book impressed upon me was that a writer needs a door, someway to shut out the rest of the world. I write in coffee shops a lot and use headphones and the Pandora station, Yo Yo Ma, as my door. I keep the music low enough it is just under my thoughts. I even play the station when I have my office door closed and am writing with my desktop. It is now part of my writing habit.

As mentioned earlier I am deep into book two of this series, though I do have a magical realism novel running around the back of my brain. Lately I have been writing some poetry and just recently published two of my poems in a Northern California anthology.

I can be reached at the email: [email protected]

if anyone should write to me please include your email.

I have a website, which, I admit, needs some updating at achildofthestarz.com