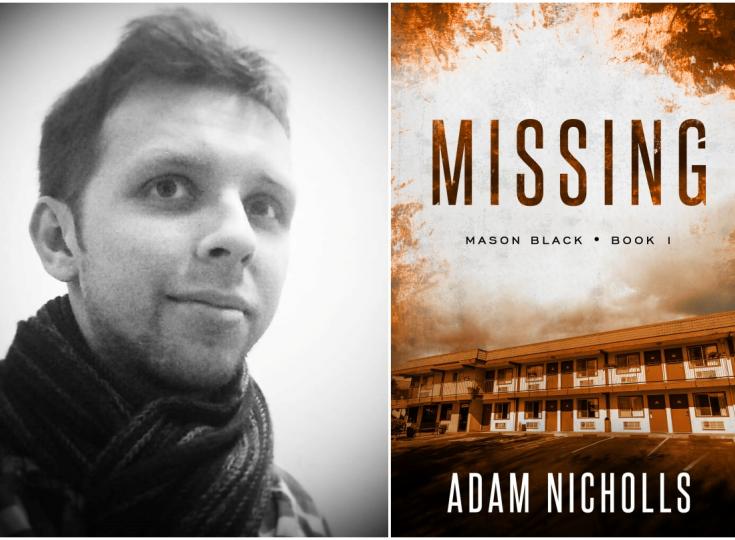 Adam Nicholls grew up in the southwest of England, where he studied creative writing while working a variety of full-time jobs. When his Mason Black series was first published, he quickly became a bestseller and then went on to create a name for himself in the thriller genre. Adam now lives with his wife in Bristol. As our Author of the Day, he tells us all about his book, Missing.

Please give us a short introduction to what Missing is about.

Missing introduces protagonist Mason Black, a retired cop who now operates as a private investigator. He's called upon to investigate the reappearance of the elusive Lullaby Killer, who targets San Francisco's children. It's fast-paced, violent and exciting. At least that's what I'm told. I don't like to blow my own whistle.

I've always loved darker stories, and this was my chance to take a simple concept such as a simple detective story and make it my own. It seemed challenging enough, but as soon as I found my villain the rest kind of fell into place.

Tell us more about Mason Black. What makes him tick?

It's an obsession really. Mason cares a lot for the people around him, but try as he might, he just can't give up his run-and-gun lifestyle. His entire arc has always been about trying to strike a balance, and I toy with that more and more as the series goes on.

They say you should write what you know... I jest. Serial killers are the very lowest of humans, placing them only slightly below politicians. I just can't understand what pushes them to cross the line between jokingly wishing pain on someone and actually going out of their way to make it happen. But that's something I always investigate when I create a new villain. Luckily for the fine citizens of this world, I'm not a method writer.

I can make it all the way to the freezer aisles of a supermarket before murdering anyone. I think. I can't say for sure, because I tend to black out.

The book includes a lot of violence - why did you take this approach?

Actually, it just sort of happened. It was before I had really found my voice as an author, so I was playing around with the shock factor. Missing can be quite gory at times, but it's only like that because I wanted to show the reader just how twisted my antagonist really is. Without the gore, I don't know if this book would have succeeded or not.

It can be read as a standalone if you don't mind a gentle cliffhanger. Book 2 (Masquerade) picks up only a short time after the first one ends, but while it answers the final question of book 1, I don't consider it a part of the same story.

Which of the characters did you find the most challenging to create?

Definitely Mason. Sooooo many bad things happen to him that it's a wonder he hasn't snapped. Sure, he has a short temper, but I really wanted him to be likeable and couldn't do that if he saw himself as a victim. He's constantly questioning the world around him and evaluating his own behavior at all times, but sometimes he just lashes out. All he can do is regret it later, and that's a hard line to balance as a writer.

Why did you title this book "Missing"?

It was originally titled 'Hush' as a play on the Lullaby Killer's theme. When I relaunched it back in 2018, I rebranded with a whole new cover, title, and page design. It was part of my makeover after discovering how best to sell books. Missing just had a ring to it that somehow perfectly summarized what the book was about. It then became a lot easier to brand the following books in the series by using M words.

Are you a plotter or a pantser? Do you plan out your story before you start writing or did some of it just "happen" along the way?

I'm constantly altering my approach to books with each title, but the one that has stuck around the longest is having ONE line of plot per chapter. My chapters are small, most of the books having around a hundred of them. I follow that as closely as I can, but sometimes things just change. SPOILER ALERT: later in the series, a longstanding character dies. There was never any intention of that happening, but my fingers just took over and started writing it. I cried as I wrote (embarrassingly enough), because it felt so wrong but so right at the same time. Things like that can change what a series turns into, so you just have to roll with the punches.

Try to talk myself out of it. If I can't do that, I'm on to something.

I set my alarm early, make a coffee, then go straight to the office. I hammer my way through 3k words in one or two sittings and have my writing done by around 10. After that I focus on publishing, editing, arranging new book covers, and interacting with my readers. I have a lot of books, which means a lot of readers, which means a lot of emails. Sometimes it takes a while, but it's the best thing about my job. At least until I get a rude critic. But hey, that's what the block button is for, right?

I'm currently working on books 6 and 7 in this series. I plan to cap it off at 8, but we'll see how that goes nearer the time. Book 6 - Mimicry - is almost finished. Phew!

They can go to my website (adamnichollsauthor.com) or follow me on Facebook. I interact with my readers as much as I can, so feel free to drop me a message. If I don't get back to you immediately, it's because I'm either writing, sleeping, or being a half-decent husband.