A.J. Culey - A Whole Town Full of Shifters
Posted on 10th of December, 2016 by Naomi Bolton 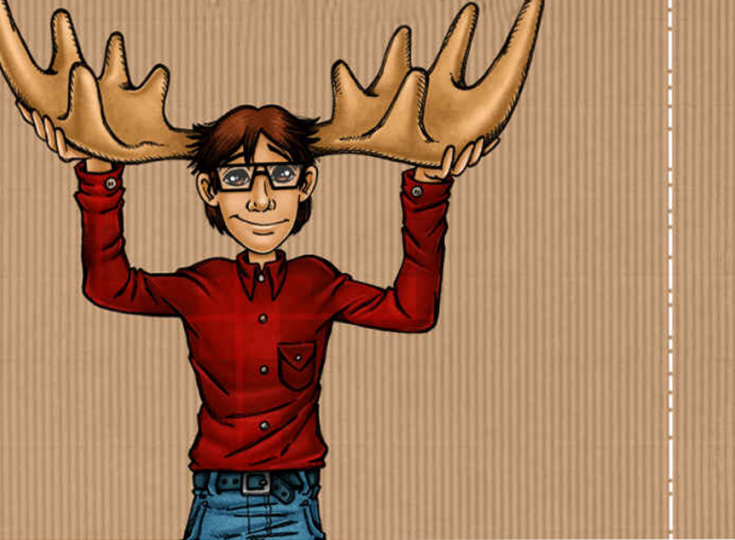 When A.J. Culey isn't using her Crazy Catlady skills to handle cats and bunnies, she teaches a bunch of unruly kids or enjoys writing books for them. For her latest book, The Trouble with Antlers, she created a whole town of shapeshifters and a lot of funny situations. As our Author of the Day, Culey reveals what animal she would have been if she was a shifter, why she enjoys writing for teenagers and talks about her writing habits.

Please give us a short introduction to what The Trouble with Antlers is about.

The Trouble with Antlers (a.k.a. Melvin’s Rampant Rack) is the first Shifter High story and in this installment, the focus is on Melvin and his issues. Melvin is a moose shifter whose antlers recently came in, but with those antlers come a host of problems, including the fact that anytime a girl gets too close, they explode from his human head. This makes high school an almost unbearable experience for Melvin and to make matters worse, a human girl just enrolled at his school and he’s been ordered to avoid her at all costs. Of course, this proves to be an impossible feat and chaos results.

What inspired you to write about a whole town full of shifters?

Originally, it started with an idea, the most basic idea – boy meets girl. But I wanted to give it a paranormal twist, so the boy became a shapeshifter. Then I had to decide what kind of shifter. I wanted something unusual and for some reason, moose popped into my head. I then started brainstorming about how a human girl would even meet a moose shifter and things kind of snowballed from there. Before I knew it, I had an entire town of crazy shifters and two humans they were trying to keep from discovering their secret shifter sides.

How much have your experiences as a teacher influenced your writing?

My experiences teaching have given me a lot of insight into how schools work, from a variety of different perspectives. The result is that I have a lot of ideas as I write stories set in schools like the Shifter High series and my children’s book, Tyrabbisaurus Rex.

In The Trouble with Antlers, I found myself constantly thinking about the various areas of a high school and how they might be different to accommodate a shifter population. For example, Shifter High has several cafeterias so that it can offer herbivore, carnivore and omnivore diets. I also found myself analyzing the situation from an administrative perspective, imagining the difficulties the principal would encounter trying to make the high school “human-friendly.”

When writing Tyrabbisaurus Rex, I was constantly drawing from my own experiences as an elementary school teacher with two classroom rabbits. My memories of the bunnies and the mischief they got up to, along with the relationships the students had with them, highly impacted the writing of that book. I should also mention that much of Rex’s character is drawn from my two bunnies and their crazy antics.

Why do you write for teenagers? What is it about this audience that inspires you?

When I was a child and teenager, I thought books were magical. I loved losing myself in the stories. They opened me to a world of possibilities and provided me with experiences far from my own. I want to create that magic for others, especially for children and teens. In today’s world, books are competing with video games, TV, movies, graphic novels, social media and so much more. For that reason, I try to create books that are fun and engaging, that will draw kids into the experience and make them want to read more.

Tell us a bit more about Melvin.  What makes him so special and how was he conceived?

I have a special fondness for Melvin. For me, he’s everything awkward and wonderful about being a teenager. The poor guy literally cannot catch a break and yet, so much wonderful possibility exists between him and Amelia. If only he can learn to control his unruly rack. The series really started with the concept of Melvin’s character. And I honestly have no idea how he came about. I’d love to give this fantastic story about seeing a moose by the side of the road. But really, it was just a process where I came up with one idea, asked myself some questions that led to more ideas and Melvin was the end result.

Did you plan right from the start to make this a series?  How does the next episode tie in with this one?

Originally, The Trouble with Antlers started as a short story. But I kept getting ideas, not just about Melvin, but about other characters and their stories as well. Melvin’s short story grew into a novella and I quickly realized I was going to need more installments to do the world I’d built any kind of justice. The second installment is The Trouble with Thieves (a.k.a. Those Blasted Bunnies) and is Paulie Porcupine’s story. Paulie is Melvin’s best friend and is convinced the bunny shifters are stealing his acorns. We have a minor mystery here as Paulie tries to prove his theory and we also see a continuation of Melvin and Amelia’s stories.

Your book contains some expletive language and uncensored content.  Why did you take this approach?

I think it’s important that literature for children and young adults reflect their realities. The truth is that teenagers occasionally curse and their hormones are often going a little crazy. The Trouble with Antlers truthfully has only a couple, minor expletives in it, but I really struggled in the writing of those scenes. I kept trying out non-curse words, but they just didn’t come across as real or authentic. More than anything else, I want my readers to feel like they’ve read something reflective of their own lives and experiences. Sure, the series is about a town full of shifters, but the emotional reality of being a teen today should still ring true. As for uncensored content, I think the series is truthfully pretty mild, though there is a lot of innuendo. But let’s be real. There’s also a lot of innuendo in Disney cartoons J

Hmmm. Well, I can’t shift (how sad), but I do have the amazing ability to bond with every cat I meet. I constantly battle Crazy Cat Lady syndrome – it’s a special skill of mine. I’m also pretty good at teaching and I’m fairly fluent in four languages (none of which are of the animal variety – how sad again). I should also mention that I’m not the talented artist who illustrated The Trouble with Antlers and Tyrabbisaurus Rex because drawing is a skill that I most definitely lack. Instead, my illustrator is the most amazing Jeanine Henning.

They sure do! Take Katrina in The Trouble with Antlers. She was supposed to be a wolf shifter (I figured I should put in more traditional shifters every once in a while). Katrina, though, insisted she was a tiger (kind of like Tyrabbisaurus Rex always insisting he’s a dinosaur). I let Katrina win that battle. After all, she makes a pretty good tiger.

If I weren’t a teacher, I would totally write though the night. I’m definitely at my best during the late night / early morning hours. Unfortunately, I have to teach so early in the morning, I’ve had to force myself to become an evening writer instead. And I am a laptop author all the way. I don’t know how I survived pre-computers. Writing by hand is just so much work.

I honestly make things up as I go along, basically world-building along the way. I do start with a basic premise or idea and I usually have a document dedicated to answering the big questions about my world, so I know where to start. I also tend to create more documents along the way to help me keep things straight. For example, I have a whole folder dedicated to everyone’s high school schedule. I have to make sure I know where Melvin should be when Amelia’s in art. Otherwise, I’d be lost. Basically, I make decisions as things come up and then I write those decisions down in one of my organizational documents for future reference.

If you were a shifter, what animal would you probably be?

Some kind of cat definitely. Maybe a wild cat like an ocelot or a black-footed cat. Or maybe a domesticated one like a Maine Coon or a tabby. I think sleeping all day in the sun sounds like an awesome life plan.

I’m usually working on several projects at once. At the moment, those projects are The Trouble with Tigers (a.k.a. Katrina’s Homicidal Urges) and the next book in the Tyrabbisaurus Rex series.

Information about my books can be found at my website www.ajculey.com or on Amazon at www.amazon.com/author/ajculey.

Readers can interact with me on