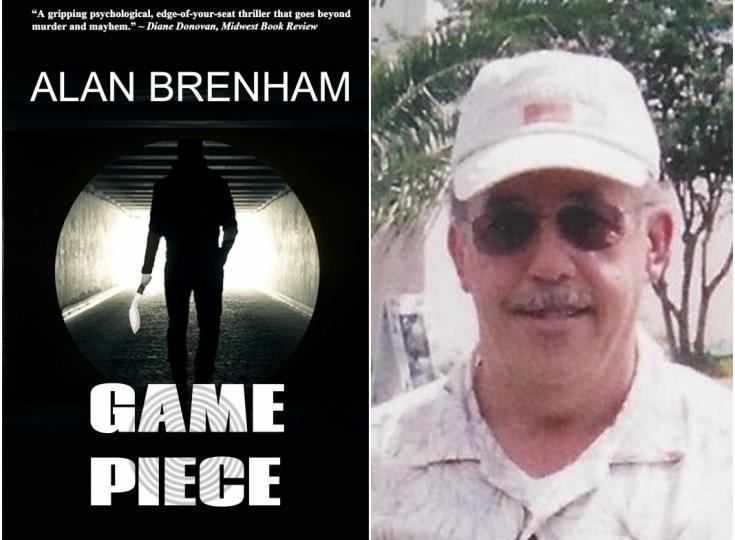 Alan Brenham is the pseudonym of Alan Behr, an American author and attorney. He served as a law enforcement officer before earning a law degree and worked as a prosecutor and criminal defense attorney. His travels took him to several European and Middle Eastern countries, Alaska and almost every island in the Caribbean. He resided in Germany for a few years while working the US military. Alan and his wife, Lillian, currently live in Texas. As our Author of the Day, he tells us all about his latest book, Game Piece.

Please give us a short introduction to what Game Piece is about.

Detective Barry Marshall hunts for a hardened serial killer with the ultimate endgame, one intended to strip Marshall of everything he holds dear—his career, his wife Erin, and his reputation.

Unbeknownst to Marshall, the killer had dated Erin years ago, and seeing Marshall with her pushes him over the edge. Determined to punish Marshall for stealing his beloved, the killer plays a deadly cat-and-mouse game of murder.

As the body count rises, Marshall is forced to face his worst nightmare.

What inspired you to write about a hardened serial killer who has his sights on a detective?

My inspiration came from two main sources – news stories about crime and my own experiences as a LE officer – an officer in my department had been stalked by a parolee he’d testified against - and prosecuting and defending cases as an attorney.

Tell us more about Barry Marshall. What makes him tick?

He has a deep-seeded need to protect his wife and daughter from the people he has to deal with – to keep that side of his life away from his family. Whatever he has to do to keep them safe is what he’ll do.

Why did you title this book Game Piece?

The title was actually my wife’s idea. She felt that the killer was playing a game with Marshall and that, consequently, the killer treated him as nothing more than a pawn in a chess game.

I keep trying to improve my craft by reading and studying other genre-similar authors.

You have also worked as a law enforcement officer and attorney. How has this influenced your writing?

They gave me the ability to be able to “see” what the detective protagonist faces when he is on the street working a case.

As an example, from my experiences, I would know how he has to raise latent prints from different surfaces or how he’d want to conduct an interrogation of an arrestee – that they’re not all done the same way.

The story is told from alternating points of view. Why do you take this approach?

I wanted the protagonist to stand out from the other players in the novel. That way, the reader would feel closer to him and less so to the others.

Why did you pick a TX police department as the backdrop for the story?

I used a Texas PD as the backdrop since almost all of my experience is as a Texas LE officer.

I’d advise my younger self to read more and keep a diary of his notable experiences and to begin writing novels much sooner.

I’d like to meet John Sandford because he was the author of the Detective Lucas Davenport series. That was the first crime fiction novel I read and kickstarted my own crime fiction writing.

What is your favorite line from this book?

“I never cheated on my wife, but how was I going to prove it?”

I like to listen to music while I write. My average writing day consists of writing and researching – all in the afternoon.

I’m working a novel which is set in Washington DC then shifts over to London, UK. The main protagonist is a woman who has to fight for her life, her freedom, and her reputation until she can solve her own nightmarish situation.

Readers can find out more about me at my website – www.alanbrenham.com. They may contact me through the website or on social media. I welcome reader interaction.