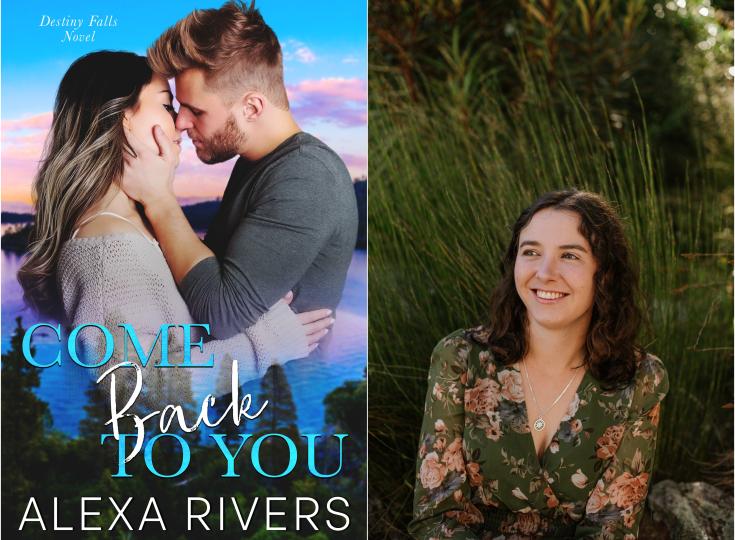 Alexa Rivers writes about genuine characters living messy, imperfect lives and earning hard-won happily ever afters. Most of her books are set in small towns, and she lives in one of these herself. She shares a house with a neurotic dog and a husband who thinks he’s hilarious. When she’s not writing, she enjoys traveling, baking, eating too much chocolate, cuddling fluffy animals, drinking excessive amounts of tea, and absorbing herself in fictional worlds. As our Author of the Day she tells us all about her book, Come Back to You.

Please give us a short introduction to what Come Back to You is about.

Come Back to You is a second-chance love story between celebrity actress Kennedy Carter and small-town firefighter Liam Braddock. They met while Kennedy was in his hometown of Destiny Falls for a gap year in her late teens. She was going to move there to be with him, but tragedy struck her family and she was forced to return to California. Only, she never explained the full situation to Liam, so he felt blindsided and abandoned (P.S. you can read this backstory in the free prequel, Stay With You).

In Come Back to You, Kennedy is finally free of the responsibility that fell on her shoulders after her family tragedy and she decides to return to Destiny Falls to try to win Liam back. Only, he's not interested in hearing from her, and the town's inhabitants aren't pleased to see her. She also has a stalker on her heels, and they seem to be getting more dangerous the more she reconnects with Liam.

I love second-chance romance books. The emotion is always so real and raw, and in my opinion, makes for a great story.

I introduced Kennedy as the best friend of the hero in another of my books and felt she deserved her own love story. When I realized she was having trouble with a stalker, it seemed like a perfect opportunity for her to fly to the other side of the world to outrun the stalker and rekindle her only real love.

Why did you pick Destiny Falls as the backdrop for your story?

I love writing about small tourist destination towns in my home country of New Zealand. I have a series that takes place in a lakeside town (Little Sky Romance) and another set in a beachside town (Haven Bay), so writing a series set in the forested mountains, near a ski resort, seemed like a fun new angle to take.

I like to have a real location to (very) loosely base my fictional towns on, so once I knew I wanted to write a mountain destination, I started looking for place that might suit and settled on one of the townships located in the Queenstown Lakes district. That area has a history of gold mining, so it seemed appropriate for my fictional town to share that history.

I wanted to add a touch of whimsy, so I created a legend behind the waterfall at Destiny Falls, where a starcrossed couple were once married, and where couples now go to profess their love. It seemed fitting for the waterfall to play a part in Liam and Kennedy's story, given how tragically they were once torn apart.

You like to write about genuine characters, living messy, imperfect lives. Why do you take this approach?

My favorite characters have always been the ones I can relate to, so I love creating characters like that myself. Real people are messy. They usually mean well but things don't always go according to plan, and sometimes they make mistakes. I like to reflect that in my stories and to show that no matter what happens, things can get better, a happily ever after is possible, and often things are more perfect because of their imperfections. 'Real' is more interesting than 'flawless', in my opinion.

Eating a lot of chocolate! Besides that, I used to compete in muay Thai kickboxing at an amateur level. I'm far from being in fighting shape at the moment, but I could still throw a good kick if the need arose.

Tell us more about Kennedy. What makes her tick?

Kennedy is a warm, big-hearted person. Eleven years ago, she gave up her dream in order to raise her four younger siblings after their parents were in a car accident. She's all about self-sacrifice and helping others - to the extent that sometimes she needs to remember she's allowed to be happy too.

Why, would you say, is Liam such a great love interest?

Liam is cynical when it comes to love these days. He doesn't trust as easily as he used to and he's certainly suspicious when Kennedy suddenly reappears in his life. Despite that, he can't help wanting to protect her from the stalker and wanting to comfort her when she's upset. He's a good person who's been a bit disillusioned but as soon as he learns the full truth, he's wholeheartedly all in and doesn't hold the past against Kennedy. His protective instincts, inherent kindness, and willingness to move forward together, make him a great love interest.

Since this is the first book in a new series, set in a fictional town, I got to create the town and its inhabitants from scratch for this story. I love world-building. I made sketches of the town's layout, looked up photographs for inspiration, and got to create the quirky locals. Being creative like that is one of my favorite things about fiction writing.

Second chances are a big theme in this story. Why did you find this important to write about?

I love second chance love stories because there is so much space to delve deep into emotions and because the conflict is obvious from the start - the couple ended things for a reason, whatever it may be.

I also like the ability for people to have do-overs. Humans are inherently flawed and make mistakes. In real life, we don't always get do-overs, so it's lovely to explore what might happen if that second chance comes around. People grow and change over time and develop the tools to overcome things that might have been problems in the past, or with distance, they're able to communicate about what happened in a more productive way.

In this case, Kennedy ended their young relationship after a personal tragedy, but she hadn't felt able to tell Liam the full circumstances so he was blindsided. Now that circumstances have changed, she's ready to see if there can still be anything between them.

What is the most romantic thing you've ever experienced or witnessed yourself?

This is a hard one. I think the answer might not be something stereotypically romantic. I get horrifically seasick. Once, my husband and I were on a snorkeling day trip on the Great Barrier Reef. On the way back to land, the sea was wild, and it was raining and windy. I sat out the front of the boat so I could be sick over the side if needed, and he stayed with me, even though we were getting battered by rain, seawater, and wind. Everyone else was inside the cabin, but I knew if I went in there that I'd feel so much worse. I can still hardly believe he stayed out there with me for the entire journey (which took hours!).

Yes, Come Back to You can be read as a standalone. However, there is a short (free) prequel, Stay With You, which chronicles the first time Kennedy and Liam met and fell in love, and readers may find the story has more depth if they choose to read that first. Later books in the series will revolve around Liam's family, the Braddocks. He has four brothers (a park ranger, a doctor, a cop, and a ski instructor) and one sister (a veterinarian) who will each have their own story within the Destiny Falls series. Kennedy also has a bunch of siblings and I'm tempted to write stories for some of them as well.

I write in 25-minute sprints. I plot the story in detail, then set a target for how many scenes I need to write each day to meet the editing deadline. I set a timer with some background music for 25-minutes and do however many 25-minute sprints it takes me to finish the day's scenes.

I just finished the first draft of a bodyguard romantic suspense and I'll be editing it over the next few weeks.

My website is a good place to start. I also have accounts on most social media platforms. Instagram, Facebook, and Tiktok are the best places to catch me. My books are available on most online book retailers including Amazon, Apple Books, Kobo, Google Play Books, Barnes and Noble, Radish, KISS, Eden Books, and The Book Depository. 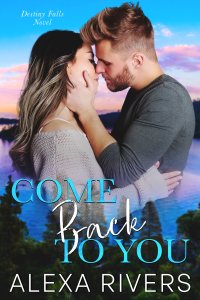 Come Back to You

Alexa Rivers
She’s an A-list actress. He’s the small town firefighter she left behind. When she returns to Destiny Falls, will he open his heart or has their love become a distant memory?
Romance
$0.99
$0.99
Amazon
B&N
Kobo
Apple
Google