Alexi Venice - Legal Thrillers with a Touch of Romance

Alexi Venice - Legal Thrillers with a Touch of Romance
Posted on 2nd of April, 2020 by Naomi Bolton 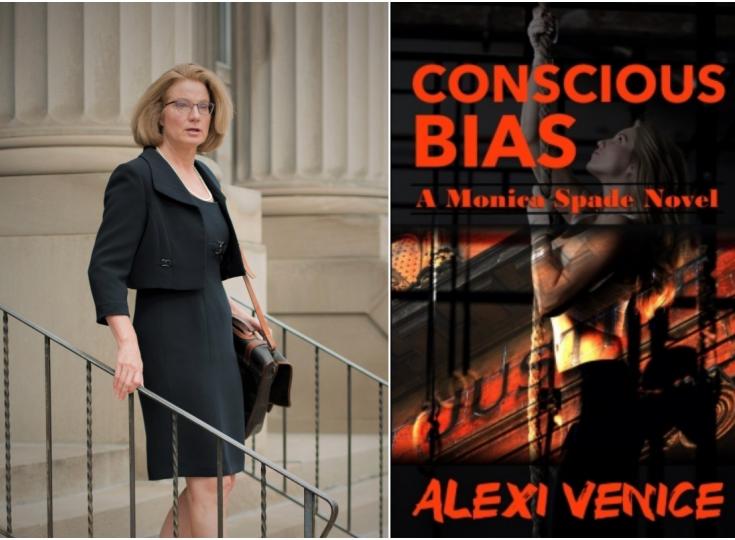 Alexi Venice writes legal thrillers and crime drama with a side of romance. She is legal counsel under a different name at an international health care system. When she isn’t working and writing, she can be found on the lake boating and swimming with her dogs. As our Author of the Day, she tells us all about her novel, Conscious Bias.

Please give us an introduction to what Conscious Bias, A Monica Spade Novel is about.

Trevor McKnight, a young, white male, is charged with the murder of Abdul Seif, a Saudi Arabian foreign exchange student. Attorney Monica Spade’s physician clients plan to testify at trial that Trevor’s punch to Abdul’s head killed him. Monica is shocked when her bosses at her all-male law firm warn her not to cross the powerful McKnight family. Facing death threats and career-ending consequences, Monica must decide whether to expose the truth in a bigoted environment. In her personal life, Monica joins a CrossFit box to work off stress. During class, she meets Shelby St. Claire, a high school art teacher. For the first time in her career, Monica considers coming out of the closet for Shelby.

What inspired you to write a legal thriller that explores visceral bias?

During my day job, I became involved in a criminal trial where a young, white male was on trial for murdering a Saudi Arabian foreign exchange student. The rural Wisconsin jury was all white. The victim was treated at the hospital where I work. Together with the District Attorney, I prepared my physicians to testify in the face of the defense attorney claiming my physicians killed the Saudi Arabian student, not the defendant’s punch. I’m not going to say what the verdict was for fear of spoiling the ending, but the experience ignited my desire to amplify the facts into a plot that explored several types of bias, including homophobia, xenophobia, and religious discrimination.

Tell us more about Monica Spade.  What makes her tick?

Monica is insecure, but she’s a smart lawyer, so she listens to a mentor who encourages her to take strategic risks in her practice. She has a fierce independent streak and solid instincts, but she has much to learn about life and the practice of law, especially criminal law. In her personal life, Monica has some catching up to do in the dating world. She has self-image issues, so she believes that the object of her affection, Shelby, is out of her league. As Monica’s confidence grows during CrossFit class, however, she ultimately learns how to navigate both the courtroom and the bedroom.

By committing myself to exploring bias from several perspectives (gender bias, sexual orientation, national origin and religious), I hope I exposed examples of stereotyping, genuine ignorance, and intentional malice. I addressed the uncomfortable topics and feelings through the characters in subtle, and not-so-subtle, scenes. I also tried to incorporate some surprise elements of bias in the plot that added a few twists, especially at the end. Of course, I was nervous about the reception for this storyline, but I’ve been pleased that readers have embraced the book. The story is loosely based on actual events, so that helped me to assimilate the concepts into an authentic narrative.

I’ve practiced law for 31 years, which isn’t a secret. I’m in-house counsel at an international healthcare organization. (Right now, I’m busy helping our system address the COVID-19 pandemic. I cannot stress enough how much I respect the physicians, nurses, housekeepers, and other employees who risk their own health to treat patients.) Ordinarily, I’m the lawyer who prepares our healthcare providers to testify in criminal trials where they have treated the victim, the accused, or both. I deal with law enforcement, the District Attorneys, and defense counsel in my practice, and I’m grateful to them for supporting my writing. Recently, a local detective requested me to write him into my latest book.

Why legal drama? What drew you to the genre?

The old adage is to write about what you know, and I feel comfortable writing about legal and medical dilemmas. In addition, the books I’ve enjoyed the most have always had a little romance in them, so I’m committed to exploring romantic relationships in my crime and legal dramas. I prefer to write about lesbian romance rather than straight relationships. I’ve written plenty of straight romance, but the market is flooded with male-dominated storylines, so I focus on a mostly-female cast with female romance. Having said that, I do adore Tommy Vietti, a detective in my San Francisco Mystery Series. He, Dr. Jen Dawson, and DA Amanda Hawthorne solve life and crimes together in that six-book series. There’s no “man-shaming” in my books.

What makes Monica and Shelby such a great match?

They don’t compete with each other on any level. Monica is attracted to Shelby’s beauty and sweet personality, and Shelby is attracted to Monica’s smart mind and genuine, transparent love. Monica feels like Shelby is too good for her, but women hit on Monica all the time, so she is just maturing into her own sexual appeal. Shelby is recovering from a tortuous breakup, so is working on trusting another woman again. Each woman approaches their relationship with tenderness and respect, acknowledging that their chemistry in bed is undeniable. In book 2, Standby Counsel, they have to confront some baggage. I’m not going to spoil the surprise by saying who brings the baggage to the party or what it is.

One of my favorite parts of Conscious Bias is a subplot about Marcus the monkey running loose in the hospital. People might think that sounds crazy, but I’ve seen a lot of things in my practice over the years. Marcus provides some levity in a book filled with serious social commentary, plus Marcus gave me the opportunity to use every monkey-business phrase I could unearth.

I’m working on book 2 in the Monica Spade Series. In Standby Counsel, Monica insists she isn’t a trial attorney, much less a criminal defense attorney. Despite her misgivings, Judge O’Brien orders Monica to serve as standby counsel for a young woman accused of repeatedly stabbing her boyfriend to death. Unfamiliar with the role of “standby counsel,” Monica reluctantly agrees to the assignment, then faces deadly and mysterious forces coming at her—a demure Romanian woman who is as menacing as she is capable, a Ukrainian thug who will stop at nothing to get what he wants, and disingenuous FBI agents who want something that Monica will not deliver. Threats are spoken, and Monica is desperate to keep her girlfriend, Shelby St. Claire, out of harm’s way, while Monica pursues the ugly truth in the courtroom.