Amanda Quintenz-Fiedler - An Intriguing and Fun Romp Through Time

Amanda Quintenz-Fiedler - An Intriguing and Fun Romp Through Time
Posted on 29th of May, 2021 by Naomi Bolton 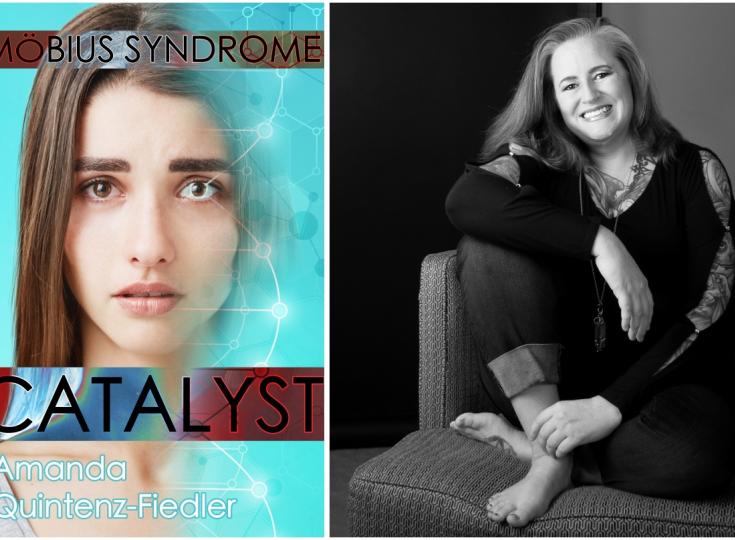 Amanda Quintenz-Fiedler has been a professional photographer, educator, and author for well over a decade. She currently lives in Southern California with her two sons, a menagerie of five cats and two dogs, and soul mate, Steve. As our Author of the Day, she tells us all about her book, Catalyst.

Please give us a short introduction to what Catalyst is about.

Catalyst is about Taylor, a young woman who hasn’t really figured out her life, who has a terrible accident. That’s when stuff starts to get weird. She starts to have dangerous medical episodes and is institutionalized for treatment, but no one can figure out what is wrong with her. She’s alone, scared, and keeps having to confront her past to try and find a way forward.

What inspired you to write about someone who experiences dangerous medical episodes?

Oh, boy, that’s a great question. Well, I was a perfectly healthy thirty-year-old when I had such excruciating pain that I literally could only crawl for short spurts for an entire day. I had just earned my Masters and was back home with my husband. He had gone to work, and I was absolutely wrecked. The next day, he took me to the ER, and I had a fun 10 hours being run through a myriad of tests and finally diagnosed. A little over a decade later, I have had four serious surgeries, have two more planned, and been diagnosed with a whole slew of unpronounceable conditions. I never really thought about the impetus for Taylor’s journey, but I bet that has something to do with it!

Tell us more about Taylor. What makes her tick?

Taylor is an odd bird. She and I have some things in common – like what shows we like to watch, or books we like to read, and an undying devotion to our older sister – but she also has some demons that she needs to deal with. (I mean, I do, too, I guess, but very different demons!) She is kind of a wreck. She doesn’t know what she wants out of life, she had potential and didn’t really do anything with it. She is listless and wants things to fall in her lap rather than have to work for them. But, she is also a good person who would do anything for the ones she loves, even at the cost of her health and future.

Why did you title this "Catalyst"?

Initially, this book was a one off. That is what I write. I see stories in their entirety and write them. Normally. But when I got to the end of this and had it with my editor, I woke up in the middle of the night in a panic and realized the story wasn’t over. So, initially, this book was Möbius Syndrome, which makes sense when you read it, but once I knew there were two more books that HAD to be written (I don’t control the genie in the corner that tells me to write) I changed the title to Catalyst, as the events in this book start her medical issues. The series is The Möbius Syndrome Trilogy. (The three will be Catalyst, Reaction, and Solution – probably the only three terms I really remember from high school chemistry!)

Until recently, I would have considered myself an educator above all, a photographer second, and a writer third. Over the years, those three have shifted around in importance. I was a college professor, teaching photography, for over a decade until the pandemic. I taught all over San Diego County at art schools, private schools, community colleges, and extension programs. It was such an affirming life. But, as an Adjunct Professor (don’t get me started on the part-time professor problems we had even before the pandemic) I was suddenly out of work. So, I started writing and photographing more. I actually started a series of Author Portraits, where I imitate the photographs of famous authors. It’s totally fun. (I will send some if you like!) I also draw and garden! 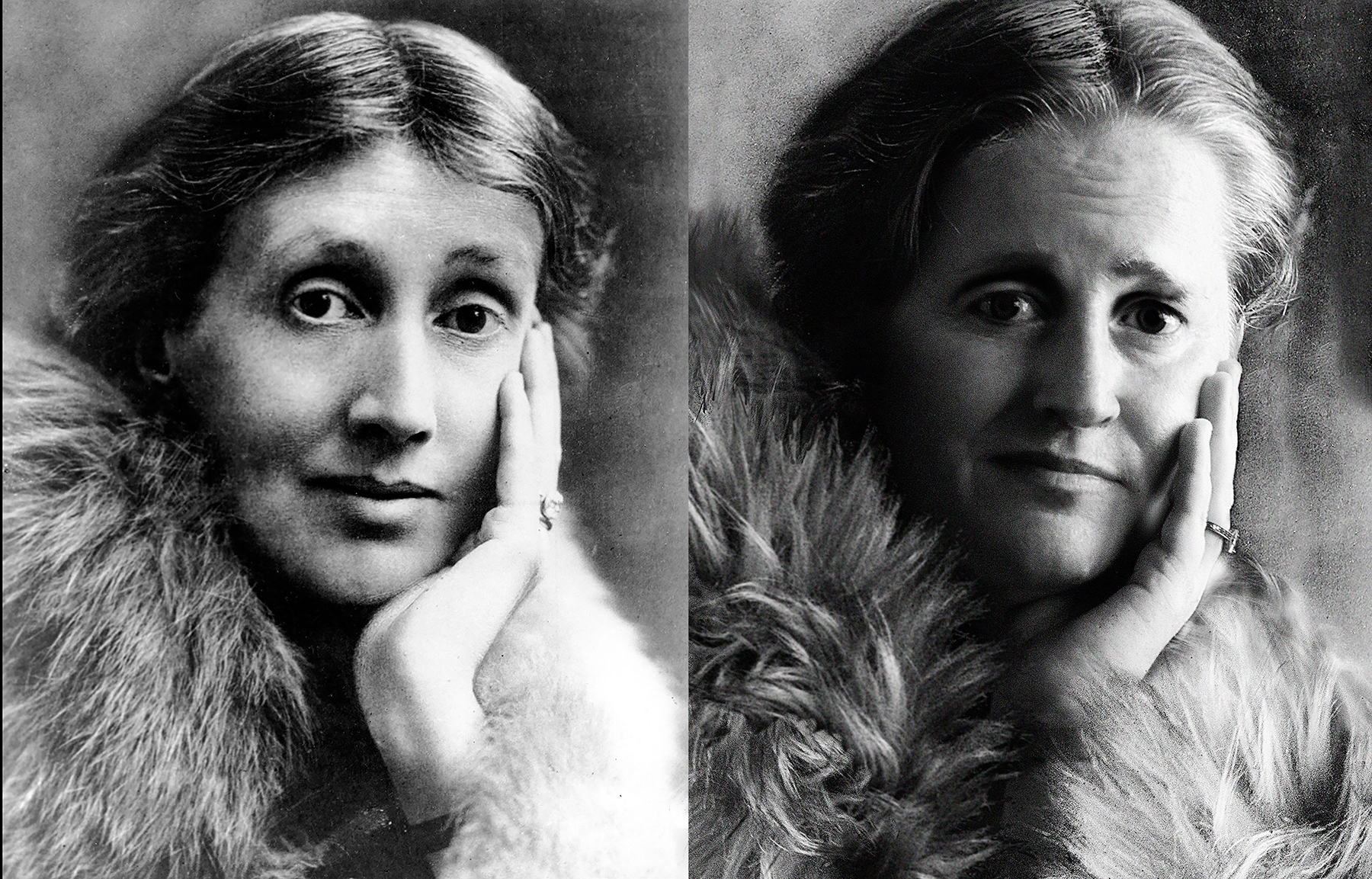 Why a medical mystery? What drew you to this genre?

When I was younger, Andromeda Strain was one of my favorite books. It was so captivating and thrilling and frightening. That on top of all of my personal medical issues, it just seemed to make sense.

This is Book 1 of a trilogy. Can it be read as a standalone? How do the other books in the trilogy tie in with this one?

Catalyst can certainly be read as a standalone, especially since that is how I initially wrote it. But after I realized it was a larger story, I went back and added some details and threads that payoff later in the series and tightened up some of the overarching character shifts. I hope people will be interested in following Taylor’s story after this, but Catalyst does have a sort of ‘end’, which will hopefully leave the reader satisfied and also intrigued. When my Dad read it, he said, “How can keep going with the story after that ending?” Hee hee hee. I can, I promise you, but if you only want to read Catalyst, I think you will be content. 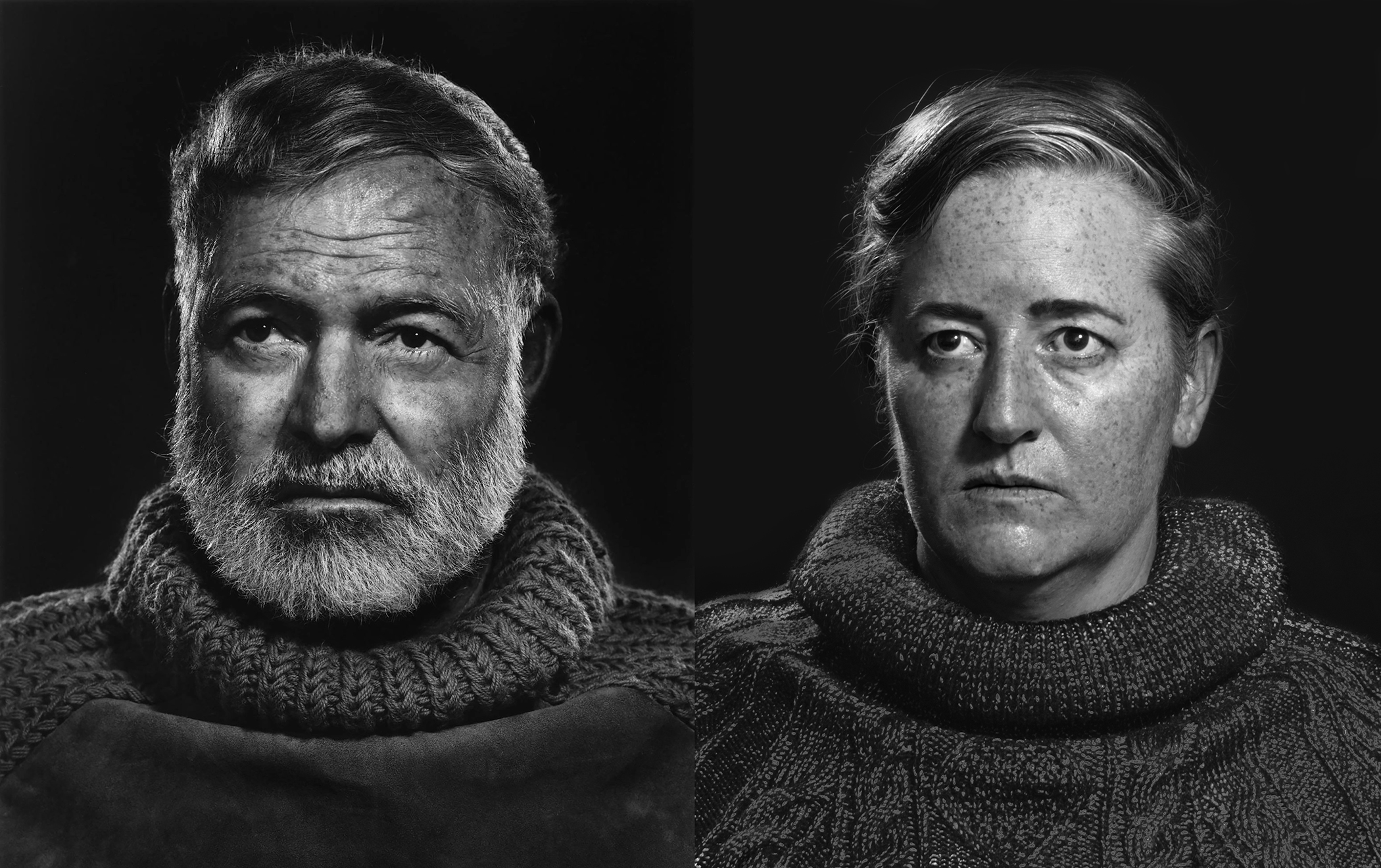 Which of the characters in this story was the most challenging to create?

I had the most difficulty writing Riaz – the young, handsome British neurologist that is brought in to try and help diagnose Taylor. I would have to keep going back and tweaking his dialogue when I would remember that he was British. If it makes any sense, I would have to picture him saying what I wrote and adjust it as needed. (That you Regé-Jean Page. “Why are you watching Bridgerton again?” My husband asks. “Research!” I reply with a mouthful of popcorn.) Riaz is a balance of doctor, young Brit, and sweet nerd. I know versions of all of those individually, but putting them all in one character was a challenge. I do find that he is much easier to write now after lots of practice.

What did you have the most fun with when writing Catalyst?

This is the first fiction I have written in the first person and I actually really enjoyed it. I don’t know if I would do it again unless the story really called for it, but I love the concept of the ‘unreliable narrator.’ Everything is seen from her perspective, so what she assumes may or may not be accurate representations of the thoughts and actions of others. That is really fun to write. I would smile when she would do something because I knew more than she did. (That sounds a little creepy when I say it like that, but she’s fictional, so I think it’s okay!)

Are you a plotter or a pantser? Do you plan your books out before you start writing or does a lot of it just "happen" along the way?

I am a plotter, plotter, plotter. I will spend sometimes more than twice as much time hashing out the outline as actually writing the book. I find if I have a solid outline, I can write three to five tight chapters a week. But without the solid outline, I end up rewriting whole sections rather than tweaking. It ends up taking much longer than if I plan ahead, and it isn’t nearly as clean in the final product. That doesn’t mean that there are pantser revelations as I’m actually writing. In Catalyst, a character named Carrie wasn’t in the outline at all. When I ‘found’ her, I realized she was elementary and I had to have her, so I rewrote the outline to incorporate her. I think there is a balance between staying true to the outline and recognizing when the universe is nudging you creatively. (As a side note, I am writing as much more of a pantser for my newest venture, serial fiction on Kindle Vella. I have an overall outline in my head, but the individual episodes are not driven by that, but rather by the character stories presented in each snippet. We’ll see how that goes!)

Readers say that your characters are really believable and relatable. How did you pull this off?

I wish I could say there was a fool proof method of writing believable characters, but what I find is that they either feel right, or they don’t. I always try and picture someone, at least initially, that I would ‘cast’ in the roll if it were a Netflix series. Then I try and add in the quirks and speech habits of those people in line with what I need from my characters. I do create THOROUGH character outlines, but those are more something I reference for consistency. I find it’s important to have unique qualities for each character – not something like “British”, but rather a quirk about how the character interacts with the world.

Oh, man, I wish there was an average writing day! With lockdown, I became a first and third-grade teacher along with everything else, since my kids are home with me all the time. It seems like every time I get into a good flow, one of them has a question about paragraph structure, or wants to tell me what they just learned about tornadoes, or can’t find the math book they need for their next Zoom meeting. It makes consistency difficult. But, if everything goes perfectly well, I will sit down with my outline on one side, with my sister’s notes (she is a much more accomplished writer than I am so I always get her seal of approval before I move on any project) on the other, the character profiles minimized on my computer for easy reference, and then I just write. When the mood is right, I can get through three chapters in a day. But then I need a week’s break after! I also listen to Spotify a lot when I write. It helps me set the mood. I have playlists dedicated to different moods that I want to set. When I can’t manage to sit down and write, I usually clean my office. Like DEEP clean, so that I can have a space free from distractions. I also have a white noise generator that also plays bird songs and crashing waves. I love that thing. 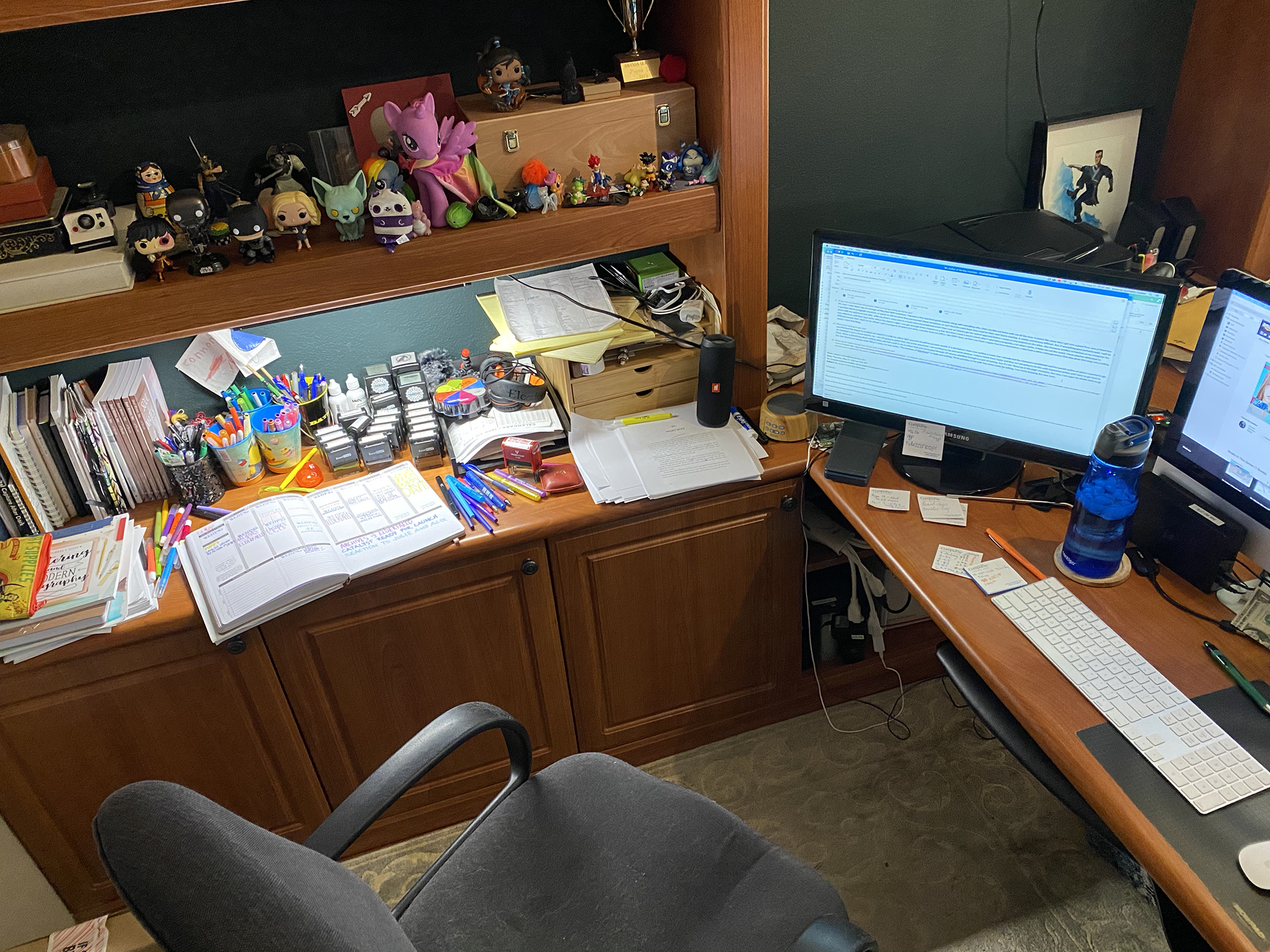 I just finished the sequel to Catalyst last week! It is with my editor right now and should be out next month. It is the fastest I have ever written a novel, but I already had the characters established and the overall outline of where I wanted to go, so I knocked it out in three months. So, I am still going to polish that, but in the meantime, I am working on my new serial venture. I need a break from Taylor and Riaz, so I am going to do this until inspiration strikes and I have to get back to them. There is something about writing when you feel the pull to do so rather than just try to plod through. Of course, plodding through is a part of writing, too. It’s the ‘show up at the page’ mentality. But now, I am eager for Kindle Vella to go live, but there is no release date! When it does, my new series, “The Archives of Elderfaeld” is ready and waiting. Three episodes so far with four more ready for editing. I am really enjoying this new story.