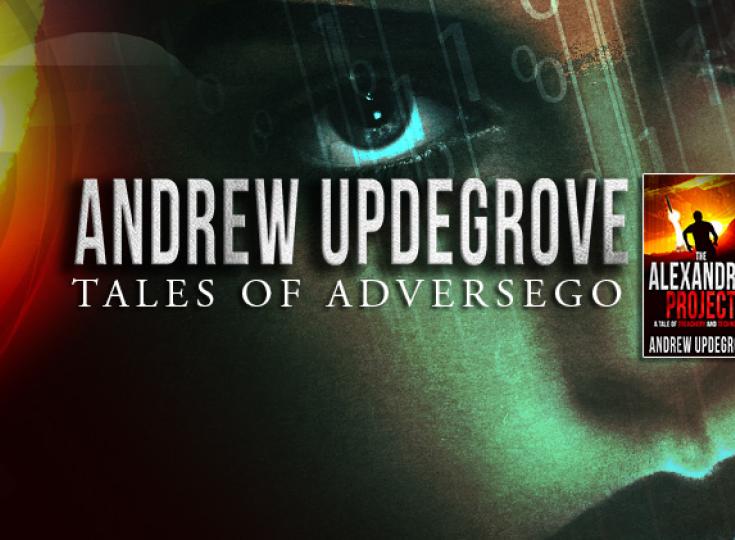 When Andrew Updegrove isn't writing or predicting the next cyber-disaster, he's likely to be roaming the back country of the American southwest in his Jeep, scouting out settings for his next book. More than thirty years of experience as an attorney representing technology companies also serves as a great source of inspiration. As our Author of the Day, Updegrove chats about his journey as an author, reveals how some of the scenarios described in his books actually came true and talks about cybersecurity and how vulnerable we are.

Please give us a short introduction to what The Alexandria Project is about.

The book introduces Frank Adversego, a brilliant but unfulfilled, divorced, middle-aged drone in the computer department of the Library of Congress. Earlier in his career, he had been an arrogant, up and coming MIT star and recipient of a MacArthur Foundation “Genius” award. The book opens with a strange message popping up on Frank’s computer announcing that key Library files have been deleted by an attacker and “contributed” to something called The Alexandria Project. As similar attacks are launched against government agencies, newspapers, universities and international businesses, pressure grows on the government to find the culprit. In the process, Frank finds himself manipulated by his boss and trapped in a power play between the CIA and the FBI that he can only escape by finding The Alexandria Project – before it leads to an all-out nuclear war.

What inspired you to write about cybersecurity, the FBI, CIA and a threatening nuclear missile strike?

As an attorney, I’ve worked for high tech companies for my entire career, including some of the major organizations seeking to protect cyber assets. What I realized along the way was that security always comes last on everyone’s agenda. Everyone wants the cool new computer toys as quickly as possible, like a kid in a candy store worries about the cavities later, if at all. Before we all went on line, that wasn’t as serious a concern as it is now, where everything is controlled – and can be attacked – through the Internet. That provides great material for thrillers. Unfortunately, the events I invent in my books have a disturbing habit of later actually happening. And why not? Each of my books has been vetted by cybersecurity professionals and confirmed as being plausible. If a lawyer with a BA in history can keep coming up with ways to destroy the world, it’s only a matter of time before a criminal or state actor will come up with the same approach.

Tell us more about Frank Adversego. What makes him tick?

Frank knows he’s smart, but he’s also woefully aware of his own failings and is his own harshest critic (the name I made up for him is no accident). He’s also hopelessly socially awkward, and most comfortable in a world where communication is limited to email. But he’s also driven to get to the bottom of things, and tends to find himself in situations where he’d better, or there’ll be hell to pay, whether for him, for a presidential election, or for life as we know it.

How much has your work as an attorney inspired your writing?

Being an attorney is a great way to polish basic writing skills. As a high-tech attorney, almost everything I do is reduced to writing – documents, articles, and hundreds of thousands of emails, each one re-read and revised before sending. Working in this area requires understanding complex things and then being able to describe them to a non-technical audience (like investors) simply and clearly, which is obviously crucial to writing a successful technothriller. I’ve also been lucky to work with all kinds of people, both brilliant as well as inept, arrogant as well as humble, and interesting as well as dull. Interesting characters make a good book as much as an interesting plot, and I’ve enjoyed coming up with lots of intriguing ones, many of whom appear in multiple books and develop along the way. My readers have become quite attached to many of them – especially the animal ones (yes, you read that right).

Do you think the scenario described in your book is likely to happen in the future?

I doubt the exact scenario in The Alexandria Project will happen, but since I wrote it, it’s become clear that the US has sabotaged the North Korean missile program in a somewhat similar way. I wrote The Lafayette Campaign before the 2016 primaries and presidential election, and some of the events I concocted later happened in real life as well. I’m deeply disturbed by the vulnerability I highlight in my third book, The Doodlebug War. That one is so great and so obvious I believe it will absolutely be exploited someday. And yet we’re doing nothing at all about it. Happily, the artificial intelligence exploits I write about in book four, called The Turing Test can’t happen. Yet.

I have to say that writing these books has made me very pessimistic. Over and over again we ignore the risks that new technology present. Right now, for example, we’re rolling out billions of “Internet of Things” devices, most of which have no security at all. The same goes for self-driving cars (what could possibly go wrong with that?) Criminals are quick to take advantage of such vulnerabilities, and enemy nations even quicker.

Oh, I’ve designed a couple of houses, built a couple of boats, co-founded a successful high-tech law firm and, earlier, a successful stained-glass business, and developed a website that in its heyday served over a million pages a month to a global audience, and still provides a vital informational resource for government, industry and academia. As you might gather from that, I like new challenges, and having my own law firm has given me the freedom to pursue them.

The yin and yang of being a self-published author. The good part was learning that a genre fiction author doesn’t need a traditional publisher at all – in fact, you probably don’t even want one. The bad part was how astonishingly difficult it is to get good self-publishing information, especially about marketing your own books. Most self-published authors go through endless amounts of time and the tortures of the damned trying to sell just a handful of books. It took me years to find out about services like ManyBooks, and the small number of similar services that are actually worth using. Virtually all of my marketing efforts now are made up of reserving ad spots at the top six newsletters like yours, and I sell far more books now than I did when I was doing all the other useless things the “experts” tell new authors they must do.

Your book contains a couple of twists. Did you plan these out before you started writing?

Until not too long ago I thought I didn’t have the imagination necessary to write fiction. But I do like solving puzzles. One reason I ended up writing technothriller/mysteries is that a mystery novel is mostly a series of puzzles that the author has to construct and then string together to make a plot: “if I want this to happen, then I’ll need to have this happen, and for that to happen, I’ll need a new character…” When I start a book, I know how it will end, but almost nothing else. I just head off in the general direction of the finale and let the characters tell me what has to happen in between.

The Alexandria Project contains quite a bit of satire - why did you take this approach?

I’ve always had a sense of humor, and I’ve enjoyed bringing that into my writing. I also believe our current political system is totally absurd. Each of my books has a political subplot, and Washington is a boundless source of new nonsense to lampoon. One benefit to being an Indie author is that you can design your own unique genre – in my case, cybersecurity political technothriller satires, and then (hopefully) find an audience that thinks that’s a cool idea. Happily, a lot of readers have.

Your book also raises some questions about modern warfare and military preparedness. How safe, do you think, are we?

In the military, they speak of “asymmetric warfare.” That’s where (for example) a technologically backward country takes advantage of an advanced nation’s dependence on high tech weaponry. Right now, the US has a bigger military budget than the next 20 nations combined. If you were North Korea, Iran or ISIS, would you go toe to toe with our military might, or attack our computer systems? I think the answer’s pretty clear. The next war we lose won’t be on the battlefield, and the targets will be civilians.

How did you manage to maintain an atmosphere of suspense throughout the book?

It’s been a lot of fun learning how to be a better writer and employing new techniques for creating and maintain suspense. That can be particularly challenging when you’re writing in a technical genre, where there’s a fair amount of technical detail you need to work in without boring the reader (Tom Clancy is a master at this). Most frequently, I add suspense by setting up conflicts, scenes and uncertainties. Each one is a different type of device, and you can use as many or as few of them as makes sense in the context of the plot of the book you’re writing. For example, in each of my third and fourth books, frequent cyberattacks provide action and first-person experiences to keep things moving along.

The technology underlying book five (still without a title) is something called the blockchain. You may have heard of bitcoin, which is a “cryptocurrency” that is created and traded using this technology. It’s been a long time since I’ve seen the technical community so jazzed up about a new technology, so I almost don’t have a choice. There’s an international angle, a shadowy figure behind the mischief that’s afoot, and the global banking system is the target. Oh, and there’s also a squirrel Frank names Fang.

My current books are available at Amazon here https://www.amazon.com/Andrew-Updegrove/e/B006URQKHE/ref=dp_byline_cont_ebooks_1  Readers can also visit my author site and read  the initial chapters of each of my books, keep up with my blog and more at http://andrew-updegrove.com/  Right now, I’m posting the first draft of book five a chapter at a time each week as I write it. Readers are welcome to make suggestions, ask questions and perhaps read the occasional interview with Frank himself. All you need to do is register as a Friend of Frank here http://andrew-updegrove.com/become-a-friend-of-frank/ Be sure to also check the box on the right to get alerts each time a new chapter is posted. Of course, I’m also on Twitter @Adversego, and on Facebook at https://www.facebook.com/Andrew-Updegrove-Tales-of-Adversego-1834676918…