Annette Oppenlander - Germany’s War Children and the Civilian Side of WWII
Posted on 16th of March, 2019 by Naomi Bolton 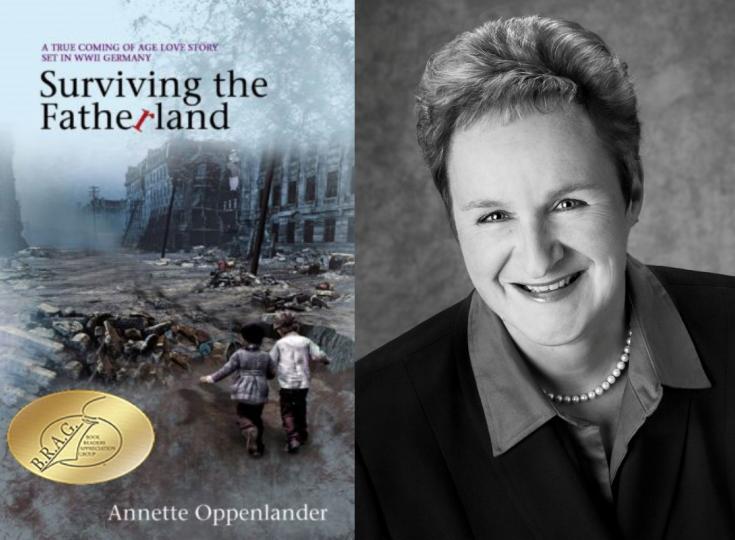 Annette Oppenlander is an award-winning writer, literary coach and educator. As a bestselling historical novelist, Oppenlander is known for her authentic characters and stories based on true events, coming alive in well-researched settings. Having lived in Germany the first half of her life and the second half in various parts in the U.S., Oppenlander inspires readers by illuminating story questions as relevant today as they were in the past.  As our Author of the Day, Oppenlander tells us about her book that tells the story of her parents, Surviving the Fatherland.

Please give us a short introduction to what Surviving the Fatherland is about.

SURVIVING THE FATHERLAND tells the true and heart-wrenching stories of Lilly and Günter struggling with the terror-filled reality of life in the Third Reich, each embarking on their own dangerous path toward survival, freedom, and ultimately each other. Based on my own family and anchored in historical facts, this story celebrates the resilience of the human spirit and the strength of war children.

The story begins in 1940 when my mother was 7 and my father 11 and ends in 1953. Both experienced the Third Reich and its aftermath as children/youths and I wanted to capture their unique perspectives.

What inspired you to write a coming-of-age love story set in WWII Germany?

Growing up, I always felt there were a lot of stories hidden in my family. I’d hear bits and pieces, brief references or watch my parents nod at each other in silent understanding. As my interest in history grew, my curiosity grew with it. So in 2002 I asked my parents to share their stories. I spent several weeks visiting them in Germany and recording their memories. I remember one afternoon we were in the basement while my mother ironed. I’d ask questions and she’d tell me about the way her mother treated her. I still have those tapes though it’s hard for me to hear my mother’s voice. She passed away in 2004.

My mother always insisted that my father was the better storyteller. And while I agree that his activities were quite adventurous, my mother’s quieter side offered a lot of depth. And so I think the two characters balance each other out nicely.

We most often hear WWII stories from the allies' side. Why did pick the "wrong side" of the war as the backdrop for your book?

Initially, I had planned to write short stories so my children could remember their grandparents. But then I realized there were few if any stories about Germany’s war children and the civilian side of WWII. Of course, we have excellent and moving stories about the Holocaust and the soldier’s war. There is no shortage of battle scenes. Yet, many battles were fought at home. They weren’t drawing as much attention, but they were just as heroic. I wanted to add complexity to the stereotypical portrayal of Germany during the Third Reich.

This book has received multiple awards. What has the experience been like?

Humbling. I’m super happy Surviving the Fatherland has been so well received. I just wish my mother could’ve been here to witness the wonderful response to her life story.

Readers have compared the book to that of Diary of Anne Frank and Man's Search for Meaning. Was it your intention to create something similar to those stories?

When I write I never think about other books. I don’t write to market—maybe that’s not business-wise—because I try to listen to my heart.

My intention was to show what life was like for ordinary people and especially children during that time. That generation of war children just took the abuse and after the war ended, everyone was in a hurry to move on. Nobody gave those kids a second thought. And so they sucked it in, grew up and created lives as best they could. In later years they were still accused of being Nazis because they happened to live at that time.

In addition to the war theme, Lilly’s personal struggle with the betrayal of her father and boyfriend show us how complicated love and family relationships can be. Nothing is cut and dry, black or white.

Tell us more about Lilly. What makes her so special?

My mother was seven years old in 1940, just as the war was engulfing Europe. Her father already had left home to fight, something he saw as his duty at the time. My mother and her younger brother stayed home with their mother. In researching this chapter of my family’s history, I learned that personal battles still could simmer even as greater combat swirled around them. My mother did not get along with her mother. Her mother doted on the younger brother. With her father out of the picture, my mother was left to her own devices. She told me she never got hugged. For a little girl who is seven or eight years old and goes through this hell, with bombings and everything else, never to get hugged and seeing love lavished on her brother must have been horrible. And yet, she was so strong. Made it through the war only to find that her father was missing in Russia. She spent her entire childhood waiting for her father. He didn’t return home until 1953. My mother was 21 years old.

I love to paint. I used to do silk painting, even sold my work. Some day I’d love to spend more time with it again. Maybe learn to paint with watercolors.

What makes Lilly and Günter such a great match?

I think they both brought something to the other they desperately needed. My mother needed to escape from her unloving home and she admired my father’s independence and his willingness to break the rules (when life depended on it). For my father my mother represented something he thought he’d lost along the way: goodness. She made him see that not everything was horrible and amoral. They completed each other that way.

Some readers say you took them on a bit of an emotional rollercoaster in this book. Was this intentional?

No, I didn’t realize how the story affected people until I began receiving letters and reading some reviews. I’m happy that Surviving the Fatherland resonates with my readers. I think that is the ultimate goal of an author and one I always have: create a story that stays with the reader, has an important theme and message without spelling it out. Readers are extremely smart and draw their own conclusions. I want to provide something that enriches a person’s being beyond finishing the book.

How much research did this book require from you to make the history feel authentic.  What has been the most interesting aspect of this research?

It was hard to find good information about my hometown, Solingen, in the later war years and early postwar years. The local newspaper closed for a while when the city was destroyed in November 1944. I pieced together a lot of local information. Sometimes, I’d have a question while writing and call my father in Germany. Did he remember what a loaf of bread cost on the black market in 1946? When were the water and gas lines restored after the main bombing? Thank goodness for inexpensive international phone service.

It was also not easy to ask my parents some of the questions that were so personal and painful. My mother’s horrible relationship with her mother, Mutti, weighted her down all her life. Her complicated relationship with her father, Vati, was also hard to grasp. Neither of her parents ever liked my father. After my mother died, I was extremely sad. She’d been the healthiest living person I knew. Always ate organic food, didn’t drink, didn’t smoke, lived in a nice home. Do you realize that continued resentment is one of the causes of high blood pressure? I believe she resented her mother’s refusal to love her all her life. In 2004, one month before her 50th wedding anniversary, she suffered a major brain hemorrhage from chronic high blood pressure and passed away six months later. She was 72.

I learned many incredible things, for instance the many tiny details of life during and after the war when no food could be found in stores, no water or gas were in the lines and people had to get very creative to survive. In our somewhat gluttonous first world environment, these living conditions are hard to fathom.

I think the most difficult part was finding the distance to tell the story in a way that it becomes interesting to readers. Initially, I was too close and my writing skills weren’t good enough yet. I kept studying, attending workshops, rewriting, critiquing and editing. I had to find my parents’ voices, their unique way of seeing the world. I wrote dozens of drafts. That’s why Surviving the Fatherland took me 15 years to complete.

My routine depends on the stage of a current manuscript. For instance right now I’m researching a new novel based on my grandfather, Lilly’s father, who spent nine years in Russian gulags and came home to an adult daughter at the age of 58. For that I’m reading half a dozen research books that deal with life as POWs in Russia. I also study eyewitness reports, geography, Stalin, German military history, etc.

I spend quite a few hours reading and taking notes. I also do a lot of thinking. I often work on weekends because I don’t mind. I still love writing and creating and I realize how lucky I am that I get to do what I really enjoy.

You know you read sometimes how authors publish a book a month or every three months. For me that is entirely unrealistic. Historical fiction relies on an author creating a world that correctly represents an era. That takes time and lots of research. There are no shortcuts.

Where can our readers find a copy of ‘Surviving the Fatherland?’

Surviving the Fatherland is available as eBook, paperback and audiobook. Either visit your favorite bookstore and order a copy or go online to your favorite eBook/audiobook store.