Benedict Brown - Agatha-Christie-style Whodunit with a Dash of Downton Abbey
Posted on 27th of November, 2021 by Naomi Bolton 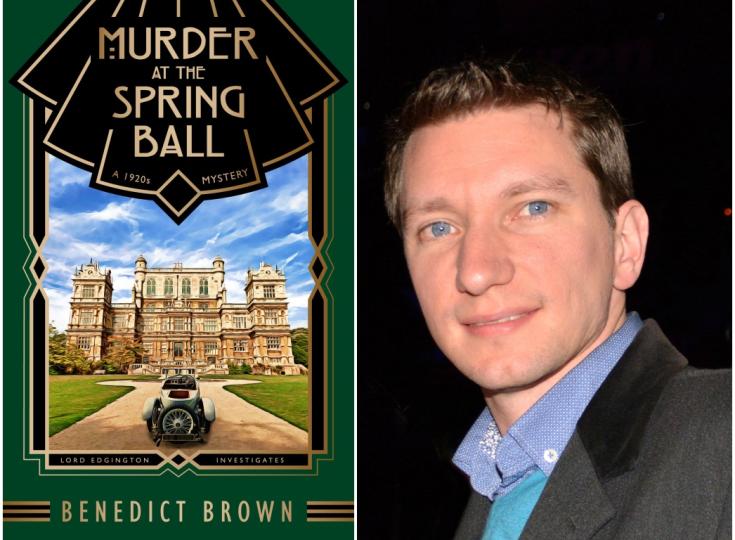 Benedict Brown grew up in a crime fiction family and had made a few clumsy attempts at writing murder mysteries over the years before launching his two series "Lord Edgington Investigates..." a bestselling series of 1920s whodunits and The Izzy Palmer Mysteries, a comedy-mystery mashup. Both series have a lot of warmth, humor and wild characters. Benedict is a Welsh-Irish-Englishman originally from South London but now lives with his French-Spanish wife and their daughter in Burgos, a beautiful city in the north of Spain. Benedict studied creative writing at university and previously worked as an English before becoming a full-time writer when Covid changed the world. As our Author of the Day, he tells us all about his book, Murder at the Spring Ball.

Please give us a short introduction to what Murder at the Spring Ball is about.

The first book in my “Lord Edgington Investigates…” mystery series revolves around a seventy-five-year-old former police detective who has spent the last decade locked away on his vast country estate. He decides he wants to embrace life again and throws a grand spring ball but, when one of the guests is murdered, it’s down to Lord Edgington and his bumbling grandson Christopher to solve the mystery and stop (too m)any other people from being killed.

My father was a massive fan of crime fiction and these books are dedicated to him. He particularly loved Agatha Christie and so these two factors served as my biggest influence. I grew up reading Christie’s country house mysteries, but wanted to put a different spin on the genre by having a more unusual detective duo in a septuagenarian grandfather and his young grandson apprentice. My father died of Alzheimer’s when he was seventy-four, and “Murder at the Spring Ball” begins on Lord Edgington’s seventy-fifth birthday, which seemed like a fitting tribute to Dad.

The book contains a lot of humor - why did you take this approach?

This is my second mystery series and, before that, I wrote children’s books. The one unifying factor between them is comedy. I find that humour always slips into my writing, and in the case of my contemporary series “The Izzy Palmer Mysteries”, it has become a dominant feature. With the “Lord Edgington Investigates…” books I tried to establish a subtler blend of comedy and whodunit but there’s still a lot of dry humour and the clash between my wily detective’s worldliness and his teenage grandson’s innocence often leads to laughs.

I grew up in a family where artistic expression was greatly encouraged and I have always enjoyed trying new things and teaching myself skills. I would say that writing is the one thing at which I have really honed my abilities over the last twenty years, but I also enjoy photography and have done weddings for friends and worked as a music journalist when I lived in Barcelona, though I love nature photography best. I used to play the drums in rock bands when I was at school, went to drama and dance classes and would love to get involved in film production in some capacity.

I am lucky to be married to a very talented person. My wife is my graphic designer and designs the most beautiful covers for all my books. We look for the right images together and she works her magic on them. The good thing about this is that we tend to design the covers before I´ve written the books and that means I can make the story fit the images so that they match perfectly. We always preview the cover for the upcoming title at the back of the previous book and I know my readers like getting a sneak peek of what’s to come.

Did any of your characters go off on their own tangent, refusing to do what you had planned for them?

I sadly don´t have much ability as a planner. I normally know what I want to happen in the mystery, but the comedy and characters shape themselves as I write. One of the things people always tell me they love about these stories is the way in which the relationships develop through the series and that wasn’t something I specifically planned. My characters have a life of their own and I’m merely here to tell the world what they think!

I’ve written this series in a way that anyone could pick up any of the books without worrying about spoilers or needing to have read previous entries. That being said, I still think it’s more fun to read them in the right order in order to understand the characters’ stories and experiences.

I am happy to say that, having released six novels and two novellas this year, I am now taking a break for Christmas! I am mainly playing with my three-year-old daughter Amelie, reading classic mysteries and getting the house ready for our annual Christmas party at home in the north of Spain. It’s lovely not to have to work for a few weeks but I’ll be starting my next book again very soon!

You can check out all my books and message me at www.benedictbrown.net or via my Facebook at https://www.facebook.com/benedictbrownauthor.