Brad C. Anderson - Survival and Morality in a Terrifying Alien World
Posted on 18th of September, 2022 by Naomi Bolton 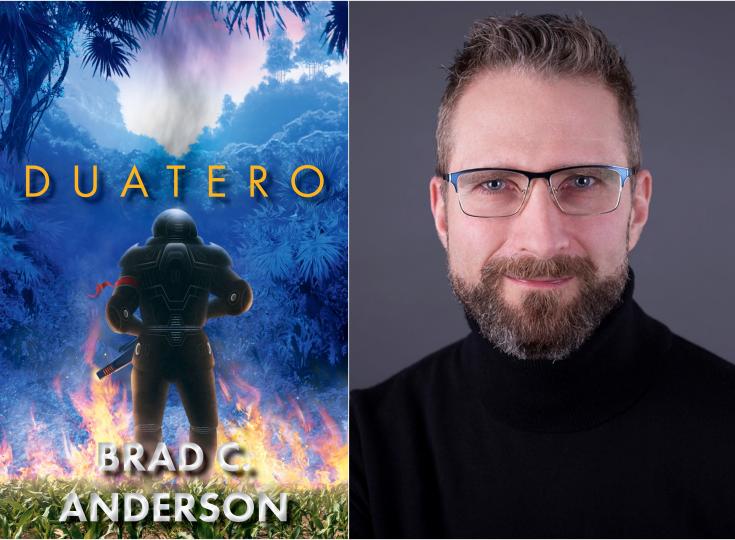 Brad C. Anderson lives with his wife and puppy in Vancouver, Canada. He teaches undergraduate business courses at a local university and researches organizational wisdom in blithe defiance of the fact most people do not think you can put those two words in the same sentence without irony. Previously, he worked in the biotech sector, where he made drugs for a living (legally!). His stories have appeared in a variety of publications. His short story “Naïve Gods” was longlisted for a 2017 Sunburst Award for Excellence in Canadian Literature of the Fantastic. It was published in the anthology Lazarus Risen, which was itself nominated for an Aurora Award. As our Author of the Day, he tells us about his book, Duatero.

Please give us a short introduction to what Duatero is about.

A searing far-future science fiction adventure about a lost human colony struggling to survive on an alien planet no matter the cost.

Majstro Falchilo Kredo has devoted his life to protecting the abandoned earth colony of Duatero from Malamiko, the indigenous ecosystem that makes their crops fail and whose contamination turns humans into mindless monsters.

But Malimiko is changing, becoming more dangerous, more aware, even as the ancient technology they use to combat it fails piece by precious piece. Kredo and his fellow soldiers must risk everything or see all they hold precious wiped away and forgotten.

Kredo is prepared to sacrifice himself—and anyone around him—to do his duty. But what if the price demanded is even higher?

A Rob Zombie music video! The video shows a witch hunter tracking down witches. I remember watching it and wondering if the "witches" he was hunting were actual monsters.

We see the world through a lens shaped by our beliefs, culture, and experience, but reality is much greater than we can perceive. We know our perspectives are limited, yet we must make life and death choices regardless. I wanted to create a story that explored that idea.

Morality and survival are big themes in this book. Why did you find it important to write about?

Morality is easy when you're at your keyboard rage-commenting on social media. It becomes much more difficult when the stakes are real, and your knowledge is limited. When your life or the life of loved ones is in danger, what is "moral" becomes a tricky question.

We're all just trying to make it through our days and know some peace. Each of us is doing the best we can with the resources we have at hand. It's important to explore these ideas to give us some empathy when judging others' choices and to give us pause for thought when making our own.

Sci-fi is a fantastic genre to explore ideas. Unchained from reality, we can let go of our shibboleths and approach issues from new angles. Through sci-fi, we can explore what is through imagining what might be.

Tell us more about Majstro Falchilo Kredo. What makes him tick?

Fear. Love. He is a soldier, an upholder of tradition. Taught how to protect his people from the dangers they face, he is willing to sacrifice himself to save his society. He knows, however, that he is failing. What he was taught is insufficient because the enemy is evolving. He knows his people are dying but has no idea how to save them.

Gardening! The eighteen-year-old version of myself would be shocked and dismayed to learn that I love gardening. I can stare at a pile of compost all the while thinking, "This is a miracle!"

Honestly, though, gardening is one of those things where you can play in the mud for hours while everyone thinks you’re a responsible homeowner.

I love that cover! That's all Dan O'Driscoll.

Dan does terrific cover art. He read the book, and that's the cover that came from it. His picture has so many layers of symbolism in it. I cannot think of an image that encapsulates the story better than that cover.

Yes. First, you must imagine the world and then make it all internally consistent. For me, it's all about world-building. I need to create the world in moderate depth to tell the story. In genres like sci-fi, the world is not merely a setting but a part of the story -- a character in its own right. It is through the world that you convey the "big idea."

Creating that world takes time, research, and hours staring at your navel.

The most exciting aspect was creating the religion of the Tero Kreinto. I wanted to create something that genuinely felt like a real religion without being recognizable to anyone on our planet today.

To do that, I took some online courses about religion and then used that to create my own for this story. That was a bucket of fun.

Do you plot out your entire story before you start writing, or does some of it just "happen" along the way?

A little of both. I've tried winging it as well as meticulous plotting, and neither work for me. I do a bare skeleton of plotting, then write. It's a vague plan with some signposts along the way with plenty of room for adventure.

You used to work in the biotech sector. How has this influenced your writing?

I stare at my screen for an hour. I write a couple of lines. Delete them. Then, I pat myself on the back for all the hard work.

I do most of my writing in the evenings. Gym, supper, playing with the dog, procrastinating, and then a couple of hours of writing before bed.

I'm a burst-writer. I have blasts of productivity where I bang out pages over a brief span of time and then stop for a break.

The story I'm writing now is a cross between Mad Max, Conan, and Dune. I'm having a blast writing it.