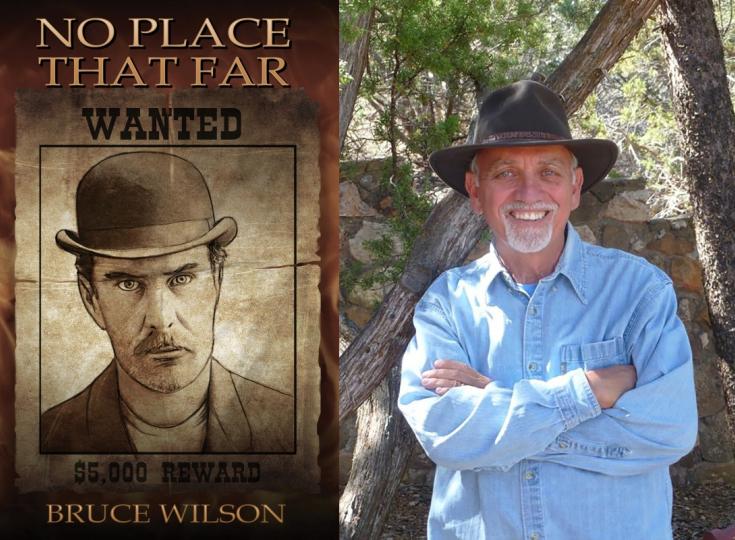 Bruce Wilson is a writer, historian, and educator living in Silver City and Las Cruces, New Mexico. He is a graduate of California State University-Fullerton and Western New Mexico University where he currently teaches American History. He is a contributing author to the anthology Bug Tales by Paul Klebahn and Gabriella Jacobs and his story "Raven's Nest" received an Honorable Mention in the Desert Exposure 2015 Annual Writing Contest. His first novel, Death in the Black Patch, was a finalist for the Laramie Book Award and the New Mexico Book Award. As our Author of the Day, he tells us all about his book, No Place That Far.

Please give us a short introduction to what No Place That Far is about.

The story is about J.D. Hooper, a fixer or enforcer for powerful men. He kills a man in Kentucky, and afraid he’ll be caught by the authorities, he runs away to Memphis. In that busy, modern city, he starts to work for the riverfront boss, doing what is natural for him—forcing people to do what the boss wants—and getting paid for it. Nearly getting caught for some of his actions, Hooper runs to El Paso and Juarez where he falls into a similar job with Pancho Villa. Realizing that he might run afoul of the law in Texas, he takes off again, this time for Bisbee Arizona. In this mining town, Hooper finds employment doing what he does best.

From a literary perspective, I wanted to challenge myself by writing about an anti-hero. How could I create a story with an evil protagonist who, in order to be cared about by the readers, needed some redeeming value?

Why did you choose the American Southwest in 1908 as the backdrop for your story?

From a purely personal perspective, my first book, Death in the Black Patch, was about Kentucky and in order to sell more books, I had to travel to that state. I thought that if I could create a story that takes place in Texas, New Mexico, and Arizona, I wouldn’t have to travel as far to promote the new book. Additionally, it would be easier to research the sites—to walk the roads, enter the buildings, feel the wind and dust.

Quite a bit, actually. I had to look at early twentieth century maps: railroad maps, road maps, geological maps so that Hooper’s movement made sense. I read biographies of real people, such as Pancho Villa and E.H. Harriman. I reviewed hundreds of newspaper articles to find events and situations which I could incorporate in the story to give it a foundation of truth. I visited museums and libraries as well and spent a lot of time doing web searches. As a History Professor, I insist on my history being accurate. When I’m reading a book and I spot an historical anachronism I give up on the book. I don’t want my lack of research to ruin my stories.

Tell us more about J.D. Hooper. What makes him tick?

That’s an interesting question especially since much of the story is about “what makes him tick.” Although Hooper was introduced in my first book (as a vigilante night rider), readers don’t have to read Death in the Black Patch to gain any background on him since No Place That Far is not a sequel, but rather it’s a spin-off. J.D. Hooper likes hurting people, he likes drinking alcohol, and getting paid for doing what he likes seems to him a perfect situation. Strangely enough, many of the people he encounters in his travels see another Hooper. He has a character flaw (at least to him it’s a flaw) that endears him to others. As much as he’s running from the law, he’s running from himself and this flaw. If I tell you what it is, it might ruin the story for others. When readers finally discover it they end up, perhaps, feeling uncomfortably sympathetic.

I generally have to fit writing into my schedule that at times can be busy. Teaching at the university requires a lot of time, as does keeping two homes in working order. But when I do write, I like to do it in my study. When I create a character I like to have a visual picture of him/her on the wall. When researching for this book, I looked at hundreds of mug shots from Memphis in 1910. I found one that had no name, no booking number, and no copyright. That unknown criminal from one hundred years ago became J.D. Hooper and is on the cover of the book. Sometimes I find myself away from the study and an idea will pop into my head. That’s why all writers seem to never be without the basic tools of writing—a pen and a pad of paper. Much of my work is first handwritten before it ever gets typed into a manuscript. Probably the most effective part of the process comes after I write a paragraph, a page, or a chapter. I give a copy of what I’ve created to my wife, Mary, to read. She’s my muse, and over the past four years, I’ve learned to trust her ideas, her insights, and even her criticism of my work.

Your characters are very realistic and readers can sympathize with them. How did you pull this off?

I’ve been a voracious reader since I first learned the skill. I read for fun and knowledge. I like fiction, nonfiction, biographies…anything. But for me, character development is more important than plot. Readers want to believe that the character is a real person. Real people have problems and successes, they have weaknesses and strengths, they do dumb things and smart things. I think that having lived for seventy-plus years I’ve experienced enough real human things that I can create believable characters.

The book contains some twists and turns. Did you plan it all out before you started writing, or did some of it just "happen" along the way?

This is another great question. I generally know where the story is going because I’m fitting my narrative into and around historical events. But once my characters take action it doesn’t take long for me to be playing catch-up with them. For instance, at one point in writing No Place That Far, I wanted to get Hooper out of Memphis so I had him headed for the train depot. When I got him there, I didn’t know for sure which way he’d go, so (and I know this sounds silly) I asked him. Hooper spoke in his Kentucky drawl and said something like “I’ll tell my landlady I’m going to Chicago and my boss I’m going to New Orleans, but I’m really heading west…way out west.” So I ended up letting him decide. This is what I mean about trying to catch up with my characters.

Where does your love for American History come from?

I truly don’t know when and how it started. I suppose that the earliest memory I have about it is from my 8th grade U.S. History teacher, Mr. Jeter, who told stories as he taught us. One time he mentioned that during the Depression, as a CCC worker he and his crew were putting up a fence along the U.S.-Mexico border and that when they reached a huge bolder that obstructed their work, they ended up running the fence south around the house-size rock and then continued building it due-west. He told us that we could consider his actions “The Jeter Purchase.” But for sure, I truly believe that it is important for us to who we are and why we are the way we are; we get this from our own history and from the history of other people and nations.

I’ve always enjoyed writing. In my corporate career, I was usually the “go-to-guy.” My bosses and colleagues knew that I could fix their poor writing because I somehow convinced them that I had mastered the skill. I would occasionally write stories, but never thought of having them published. For a while, when my younger brother was deployed in the Middle East, we traded first lines to short stories and we created perhaps a half-dozen good ones. The inspiration for my debut novel came from a family legend that “something happened to an ancestor in the back of a saloon.” When I discovered the “something,” it made for a great family reunion discussion. At the Tucson Festival of Books in 2014 I attended a panel discussion on “Writing Fiction About Real Events” I met one of the panelists. She asked me what I was working on and I replied, “I’m thinking about…” She interrupted me and said, “Stop thinking and start writing.” That was on a Saturday. On Monday morning, I got up and started writing. I wrote every day for ten months and finished my first draft of Death in the Black Patch. I had told myself for years that I didn’t have a novel in me. I guess I was wrong.

“Writers write.” That’s it. I suppose that I would add, “they also read…a lot.”

I’m working on a spin-off of No Place That Far. There is a character in it who’s a ten-year-old boy, Henry Carter, who is the main character. Now he’s twenty and a reporter in Bisbee. He meets a female reporter from Tucson or Phoenix and discovers that they both have the same objective…to write the truth at whatever the cost. They will be doing what they love during the time of the Bisbee Deportation (an anti-organized labor event), World War I, and the Spanish Flu. All of this requires lots of research, but it approaches my favorite decade in American history: The Roaring Twenties. I expect (at least now, since the characters will take me where they want to go) that Henry and Etta will encounter criminals, danger, friendship, and life. At this point I’ve drafted the first 15 chapters and am back to writing more often.

My books are available from Amazon, Barnes & Noble, and a number of online websites. I always have several copies of both books in my truck or the car and at each of our homes. My author page on Facebook (facebook.com/brucewilsonwrites) has the most up-to-date information on events and reviews. I’m always available to travel for events; I’ve spoken to book clubs and libraries, any time and (mostly) anywhere.