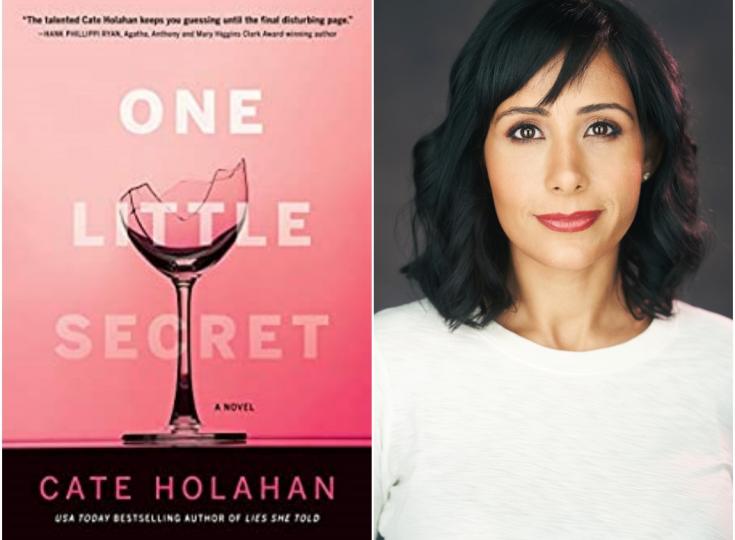 Catherine "Cate" Holahan is the USA Today bestselling author of The Widower's Wife (August 2016), Lies She Told (Sept. 2017), Dark Turns (November 2015), and One Little Secret (July 9, 2019). An award-winning journalist and former television producer, her articles have appeared in BusinessWeek, The Boston Globe, The Record newspaper, and on many web sites. She is a graduate of Princeton University and lives in New Jersey with her husband, two young daughters, and sometimes-good dog. As our Author of the Day, she tells us all about One Little Secret.

Please give us a short introduction to what One Little Secret is about.

One Little Secret is a domestic suspense thriller about three couples, all neighbors, who sublet a beach house while their kids are at camp. What is supposed to be a luxurious getaway in a Hamptons mansion quickly turns into a locked room murder mystery where everyone has a motive. It’s a story about the secrets we keep to keep up with the Joneses, and the blinders put on in the service of politeness.

What inspired you to write about someone who is on a getaway at a beach house?

I wanted to write an Agatha Christie-style murder mystery in the domestic suspense genre. Cramming a bunch of seemingly nice neighbors with secrets into a vacation house seemed a good start. While I was researching the story, I ran into an article in the New York Post about wild partying in The Hamptons while kids were away at summer camp. That story fixed the setting.

Tell us more about Gabby Watkins.  What makes her tick?

Gabby Watkins grew up in the community that she now polices. She is in a different socio-economic class than the vacationers who descend upon the area in the summer, which makes her an outsider in her own hometown. This insider/outsider status gives her unique insights into people, but also hampers her investigation.

As far as what makes her tick, like many police officers, she wants to protect her community and see justice done. She is a very straight and narrow person—a very moral person. Seeing some of the misbehaving that goes on during the summer has made her more morally rigid. She worries about the impact such wild neighborhood parties are having on her teenage children, and she wants to restore a sense of order as well as keep people from getting taken advantage of by some of the rich or famous (or both) that come to the area.

Why did you pick a glass beach house as the backdrop for your story?

I wanted a glass house because I wanted to play with the idea of transparency. How much of what we see of people is true? We can witness actions, but we can’t observe the thoughts behind them—the insecurities, the fears, and the good intentions that fuel so much behavior; all the emotional baggage folks pack away in the closet. The glass house is a metaphor for all that.

The omnipresent windows in the house also serve as foreshadowing for something that causes the whole murder in the first place. I don’t want to say more lest I give too much away.

A central theme in this book is secrets that need to be kept at all costs.  Why did you take this approach?

What is more important than reputation when you’re part of a community? I think people have a face they present to the world. Sometimes, it’s an image that is pretty close to the individual’s true self. Sometimes it’s not. Either way, the presentation is very important. I think most people would go to great lengths to protect their self-image and control how they are viewed by peers. It’s not just about pride, it’s about how a family can navigate in the spaces where they live, what people think of their kids, how easy things are for the children based on what the parents put out there.

Which character in this book did you find the most challenging to create?

The most challenging character was Jenny. I wanted to show a strong woman who is also a victim, and the unconventional way that she tries to take back her power without blowing up her family and their stature in the community. Again, this is one of those I don’t want to reveal too much lest I spoil some of the story, but a lot of research went into Jenny.

Readers say the book contains a lot of twists. Did you plan it all out before you started writing, or did some of it just "happen" along the way?

I don’t think authors can write psychological thrillers, suspense, or mystery novels without planning the heck out of them. As an author, I am trying to spin a good yarn and also lay out a puzzle for my reader to solve. My story needs to be understandable, but also unexpected. Mystery readers are looking for the red herrings. They want to guess the ending before I reveal it. I’d disappoint if I didn’t put in a ton of thought into my story beforehand. I need to plan and outline and figure out how and where to misdirect my reader while also creating characters complex enough so that the actions grow organically from their personalities. I can’t wing this.

Privacy is personal to all people. We might not exactly want the government listening in on our phone calls, but the people we really don’t want hearing everything we say are those whose opinions matter most to us. To be honest, I don’t really care if Facebook or Google hear me complain about my husband on a phone call with my best friend. I do care if my husband hears me being unkind in a moment of frustration. Conversely, I’m sure I wouldn’t want to be a fly-on-the-wall when he’s with the guys talking about how I’ve been nagging him to help me clean and homeschool while we’re all quarantined. The secrets I (and most folks) keep are not as big as the ones guarded by some of the characters in my latest book, but we all have them and the people we want to hide from most are often our loved ones, friends, and neighbors.

How do you go about choosing your characters' names?

I write books with ethnically diverse casts, in part because I’m bi-racial with a very mixed family and also because I’ve always lived in multi-ethnic neighborhoods. It’s what I know. I want that diversity to come across in the names. At the same time, I want names that an English-speaking reader most accustomed to European names won’t stumble over too much. Sometimes I get cute and also look up the meaning of the names and have that hint at something about their personality that will become relevant later.

I have ALWAYS wanted to be a writer. I penned my first mystery story when I was seven. My mom sent it into scholastic. It was rejected, but I kept at it! I was a journalist for more than a decade and wrote fiction on the side.

My debut novel was inspired by my anxieties over having my first child. I wanted her to be healthy and beautiful and smart, but, above all, I wanted her to be kind—the type of person that would give to the world more than she took from it. My biggest fear was that I would have a child who was beautiful and smart and perfect on the outside—who would have everything needed to make it in the world—but would lack empathy and therefore be a different kind of drain on society. Since I work out most of my anxiety through writing, I took my big fear, researched the heck out of children lacking empathy, and then wrote a book about it.

In the initial version of my first book, Dark Turns, the character lacking morality was seven. I aged her up to a junior in high school for the version that was published. And my eldest daughter—I should note—is almost too kind. She would do anything for anyone. I have to work now at getting her to set boundaries.

I would like to meet Gillian Flynn because I love her writing and believe she must be wickedly funny and ferociously smart. I would also like to meet Oscar Wilde, for the same reason.

I was the lead singer of an original rock band in New York for a number of years. I sang and played keyboard. Now, in my middle age, I play with a bunch of retired rockers through School of Rock.

I am editing my fifth book, Her Three Lives, which will be released by Hachette’s Grand Central Publishing in April 2021. It was pitched as Gaslight Goes Hi-Tech and tells the story of a man who succumbs to a brain injury after a break-in. He installs all these security cameras to help him feel safe, but what he sees may point the finger at his new wife for the crime.

My agent is shopping my first family drama book—a story that doesn’t involve murder, but I think is just as much of a page-turner as my thrillers. It’s tentatively titled Between The Waves. It’s the story of two young women trying to reconcile their identities with how they were raised.

I’m also writing an option book that I don’t want to say too much about yet.