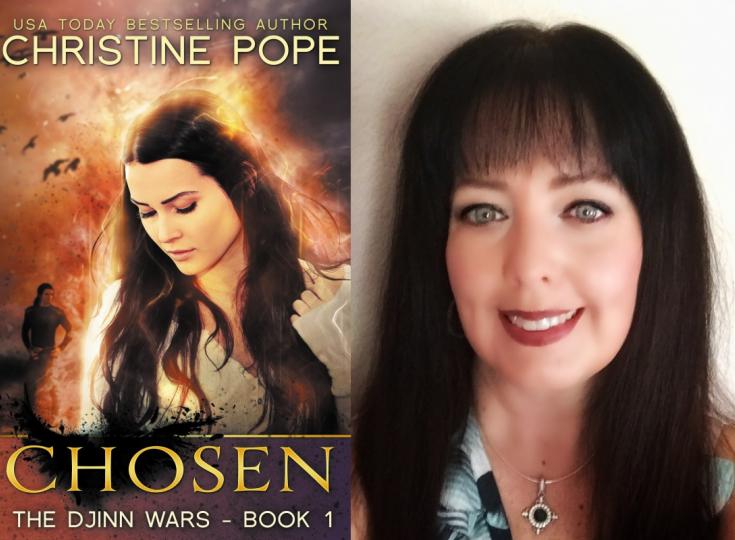 A native of Southern California, USA Today bestselling author Christine Pope has been writing stories ever since she commandeered her family's Smith-Corona typewriter back in the sixth grade. Because she's a lover of many genres, her books include paranormal romance, fantasy romance, and science fiction/space opera romance. She blames this on being easily distracted by bright, shiny objects, which could also account for the size of her shoe collection. The Land of Enchantment cast its spell on her while she was researching her Djinn Wars series, and she now makes her home in Santa Fe, New Mexico. As our Author of the Day, Pope tells us all about the first book in the Djinn Wars series, Chosen.

Please give us a short introduction to what Chosen is about.

Chosen is the story of Jessica Monroe, a young woman who is one of the few survivors of a deadly plague that kills of more than 99% of the population. This book, and its two sequels (Taken and Fallen), explores her coming to terms with this new world…and the

What inspired you to write about a fatal fever that nearly wipes out the entire world's population?

Chosen was actually inspired by a dream — I dreamed of someone wandering through an abandoned, post-apocalyptic city guided by a disembodied man’s voice in her head, and the dream was so compelling to me that I knew I needed to flesh it out into a book.

Tell us more about Jessica Monroe.  What makes her so special?

I think what’s special about her is that, at the beginning of the story, she really isn’t that special. She’s a grad student who lives in the apartment above her parents’ garage. But the circumstances she’s thrust into force her to grow into a force of nature. I suppose she has a leg up, just because her father was a cop and she knows how to shoot a gun and drive off-road, among some other survival skills, but she’s definitely not an action heroine.

What, would you say, makes post-apocalyptic thrillers so interesting? What drew you to the genre?

I think it’s the struggle of having to learn all new rules in an entirely different world. What might have worked in the past probably isn’t going to work in a post-apocalyptic setting. Characters have to rise to the occasion and find new strengths in themselves, and that sort of development is always compelling.

Chosen is the first in a series.  Can it be read as a standalone? How do the other books in the series tie in with this one?

No, Chosen is closely tied in with Taken and Fallen, which tell the complete story of Jessica and her protector. The other books in the series are more standalone, since each of them focuses on a single couple with their own HEA. They should be read in order, though, just because there are overarching events in the series that affect the characters in their own ways.

I used to teach Regency dance — you know, what you’d see in a ballroom scene in a Jane Austen film. Knowing that sort of thing definitely helped me in writing some of the scenes in my Tales of the Latter Kingdoms books, because even though the world in those novels has an earlier feel (early Renaissance as opposed to the English Regency), the principles of country dance are still the same.

The book also has a bit of a paranormal twist.  Tell us more about this.

It turns out that the fever was devised by otherworldly creatures known as the djinn, who want to take this world back from humanity and make it their own. However, it takes a while before Jessica unearths that all-important fact.

I’m not sure if it’s anything I’ve done on purpose, but Jessica Monroe — and a lot of my other heroines — proves how resilient human beings really are, how they can go through incredible hardship and suffering and somehow come through it stronger and smarter and, believe it or not, more loving.

Oh, I have to be disciplined, since I publish an average of ten full-length books each year. ;-) My “writing brain” seems to work better in the afternoon, so I do my business-related tasks in the morning and then spend all afternoon writing. I’ve been averaging five thousand words a day lately.

Do you ever have days when writing is a struggle?  What do you do to combat "writer's block"?

Oh, some days are harder than others, that’s for sure. But I’ve found that “butt in chair” on a set schedule really does help me. Also, one trick I’ve learned is to write ahead a little bit — in other words, I’ll write two or three hundred words past my word count goal, then bank that in a little “Overflow” page in my Scrivener document. That way, when I sit down to write the next day, I already have a chunk written and can get back into the flow a lot more quickly.

A lighthearted paranormal romance titled Charmed, I’m Sure. It’s a sequel to an older book of mine, Sympathy for the Devil. I realized a while back that there really was room to flesh out Sympathy into a trilogy, so I found some room in my schedule and squeezed it in. Charmed will be out in early December.