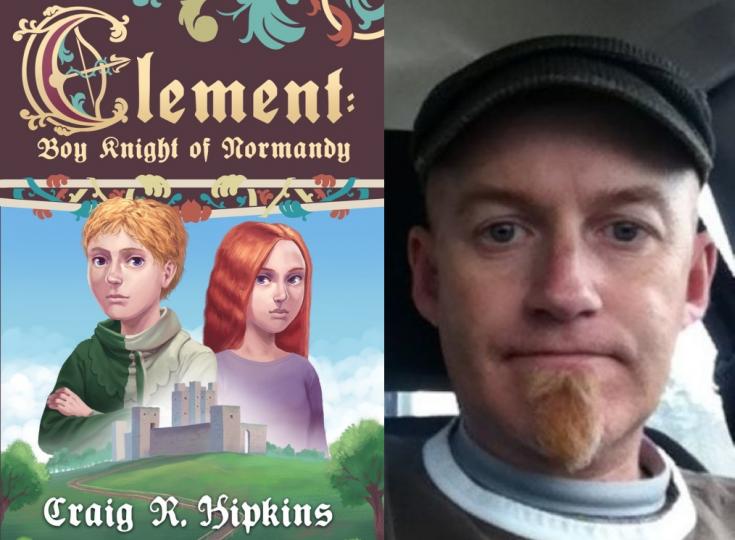 Craig R. Hipkins grew up in Hubbardston Massachusetts. He is the author of medieval and gothic fiction. His novel Adalbert is the sequel to Astrolabe written by his late twin brother Jay S. Hipkins (1968-2018) He is an avid long distance runner and enjoys astronomy in his spare time.

Please give us a short introduction to what Clement: Boy Knight of Normandy is about.

Clement: Boy Knight of Normandy is a Coming-of-Age adventure that takes the reader back to another time. Clement is a 13-year-old boy who has reluctantly inherited the title of Count of la Haye after his father is murdered. Clement’s uncle, Sven the Terrible lays siege to Clement’s castle while the young count is out exploring a cave with his two friends Dagena and Olaf. Sven is a tyrant who uses marauding bands of highwaymen to terrorize the peasants and yeoman farmers. Clement, with Dagena and Olaf’s help, raises a small army to face the invaders who are intent on raiding and pillaging the countryside. Clement suddenly finds that despite his young age he is being hailed as a beacon of hope to the poor and downtrodden.

What inspired you to write a coming-of-age adventure set in 12th century Normandy?

I was inspired to write this story after completing my novel ‘Adalbert.’ Clement and Dagena make their debut in that novel.

Tell us more about Clement. What makes him so special?

Clement is witty and extremely intelligent. He is an expert archer who frequently puts his skills on show. However, what makes him special is the way that he treats everyone equal despite their economic status. He despises cruel and avaricious people. He is kind and generous and fights injustice with no thought to his own welfare. He is more fit to be a scholar than he is a great knight, but circumstances lead him toward another destiny.

What makes Dagena such a great teammate?

Dagena possesses a marvelous sense of humor and is strong-willed. Clement first met Dagena when she was a kitchen servant at another great house where he was visiting with his father. They became fast friends. The two are inseparable and the two characters complement one another. I do not think that Clement’s character would be whole without his relationship with Dagena.

Why medieval and gothic fiction? What drew you to this genre?

I have been interested in medieval times since I was a child. My twin brother Jay, who passed away two years ago of cancer inspired me to finally write fiction. In fact, my first novel ‘Adalbert,’ is a sequel to his novel ‘Astrolabe.’

I have a fair amount of knowledge about this time period so it was easy to write. I sometimes feel like I am part of the drama unfolding when I write.

I am sort of the jack of all trades, master of none! Writing is my passion but I also enjoy reading, running and being outside in the elements! Astronomy is another passion.

This is the first book of a planned trilogy. How will the other books in the series tie in with this one?

Book 2 takes Clement and Dagena on a long-distance sea voyage to the fabled land of Vinland. Along the way, they battle a leviathan from the depths of the ocean and find out that they are part of a plot to undermine a Templar colony. Book 3 ties in with this story and I am in the early stages of the rough draft.

My characters have minds of their own! Sometimes they seem to lead me down another path. Also, I sometimes feel that my late twin brother is helping me write!

Well, I would have to choose Clement and Dagena and would take them to the local Renaissance Festival!

The hardest thing about being a writer is not having enough time in the day to write!

I write rather quickly, so editing is tedious. I hate to edit but I have two great editors, my sister-in-law Tina and her sister Tracy who help me immensely. I usually write a page or two every evening before bedtime.

I am currently editing the second book in the series. It will be called ‘Clement: The Green Ship.’ I am also writing the rough draft of the third book in the trilogy.

Readers can find out about my other work at www.hipkinstwins.com and can email me at [email protected].
https://twitter.com/CraigHipkins
https://www.facebook.com/HipkinsTwins
https://www.goodreads.com/author/show/19975162.Craig_R_Hipkins