Daniel Norrish - A Savage and Sprawling Kidnap Thriller
Posted on 15th of April, 2021 by Naomi Bolton 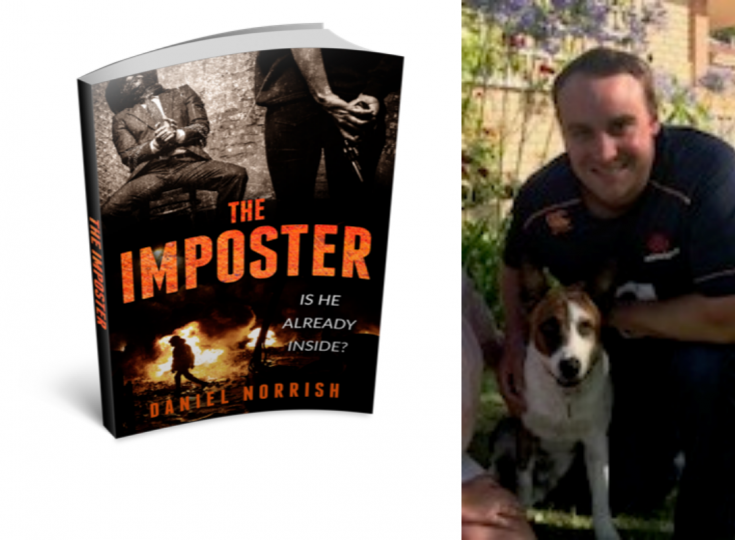 Kidnapping interests Dan more than murder and other crimes, primarily because kidnapping can build more suspense. Are they dead? Are they being held prisoner? In "The Imposter," thirteen kidnap victims tell the story of their experiences with a masked vigilante. The reader is presented with the perspectives of the captives, most of whom are murdered before they can share their knowledge with anyone other than the reader. Dan is a disability support worker, and is currently writing a kidnap novel involving a young girl with a disability. As our Author of the Day, Dan tells us all about The Imposter.

Please give us a short introduction to what The Imposter is about.

A stolen child. A dozen criminals disappear. The king of contraband in Western Australia left searching for a vigilante who is eliminating the most important soldiers in the devious empire. The Imposter records the final living moments of thirteen kidnap victims, but these aren’t your ordinary victims. These victims are money launderers, thieves, abusers, and murderers. All of these victims deserve to be kidnapped. The reader, you, are the only person to hear every confession and meet The Imposter thirteen times as you try to figure out their true identity. One question remains, who will you condemn? The murderer abducting the criminals, or the criminals who are finally meeting the sharp end of vigilante justice?

What inspired you to write a kidnap thriller?

Kidnap thrillers hold a vital bonus over murder mysteries and serial killer thrillers: the victims may still be alive. How shocking and wonderful is it when a beloved, or reviled, character returns from captivity. What secrets could they hold?

Why did you pick the border between the Australian outback and an unforgiving metropolis as the backdrop for your story?

Western Australia (WA) is a phenomenal place to go missing. Seven times the size of the state of Texas with a fraction of the population. There are still places in WA that have never been seen by human eyes, and there are cities large enough to hide the identity of hundreds of criminals. The juxtaposition of nature and the metropolis is a lot of fun to write.

You tell the story from thirteen perspectives - why did you take this approach?

The Imposter started off as a character-building exercise. I wrote one hundred questions on pieces of paper and pretended to answer them as fictitious characters to ensure each character was unique and comprehensively developed. When they were all finished, I had amputees that hid sticks of dynamite in their prosthetics, child molesters enabled and encouraged by abusive long-term spouses, a child soldier who believes he can transport narcotics across the globe without any human guidance, and ten more personalities. The novel was written in a single month as all of these deviants were thrust together in one organisation.

The Imposter. This person is the protagonist and the only character to feature in all thirteen parts of the novel, but the reader does not know the identity until the epilogue. The Imposter had to be a fully rounded, sympathetic and terrifying focal point in the novel without an identity or even a name.

As every section is the story of a kidnapping within the gang, I planned to kill all of the victims until only the leader remained, but this was impossible. Some of the characters would not die. Some of them could not, and the worst of them seemed too cunning, too experienced in their violent vocations to accept the mantle of ‘prey’.

The original cover (attached to this interview) was rejected by Amazon for being too violent. It was created to show the brutality of the narrative but broke the laws of advertising on the internet. The current cover was a replacement to highlight the novel’s suspense rather than action. What do you think? Which do you prefer?

I completed an honours year at university where I studied the way smuggling in the Balkans has reflected the needs of the community. When the community requires something specific (like weapons during war or petrol during poverty), it’s stolen and smuggled. I was able to highlight a few of the interesting things that I learned in this research. One of my favourites being that a crop grown in a developing nation costs almost no money to produce. If this crop can be converted into a profitable luxury, such as narcotics, a smuggler might be able to accept the loss of a huge amount of product if they know a small amount will find a lucrative market. You can lose a thousand kilograms of cocaine that you produced yourself as long as one kilogram makes it into the noses of Australian tourists.

Readers say that although your characters are criminals, they are also relatable. How did you pull this off?

The criminals are victims. They are as terrified of The Imposter, as you or I would be of them. Their fear drives the reader to sympathise.

It’s also a fun way to write. If I thrash out a first draft without planning, I get to enjoy all of the twists and turns as they pop up.

Write for three hours at a time and try my very hardest to focus on nothing else. Then I lift weights or nap in equal measure and start another three-hour burst.

My current project is by far the most exciting. I’m writing about a four-year-old girl with complex disabilities. She cannot communicate or interact with acceptable social behaviours, but she is kidnapped by a mysterious admirer. After being missing for fifteen years, she is returned to her family.

If you like free stuff, head to www.danielnorrish.com and sign up to the email list. I’ll send you free ebooks before they’re released, and you can join competitions for Amazon gift cards.

The Imposter is part of the Love is Dangerous series. What can readers expect from the other novels?

Love is Dangerous hunts a serial killer devoted to ending the lives of young couples. He’s jealous of the romance they’re allowed to enjoy, and Detective Inspector Stephanie Saxon knows he’ll kill again before the police can find him. He knows where Saxon lives and who she’s sleeping with, but he doesn’t know she carries an unlicensed firearm on her ankle, and she’s only moments from kicking down his door.

The original novel in the Love is Dangerous series is The Bodies We Won’t Bury, and you can read The Imposter before or after this title.