Dave Vizard - Shining a Bright Light on the Dark Underground World of Human Trafficking
Posted on 30th of April, 2019 by Naomi Bolton 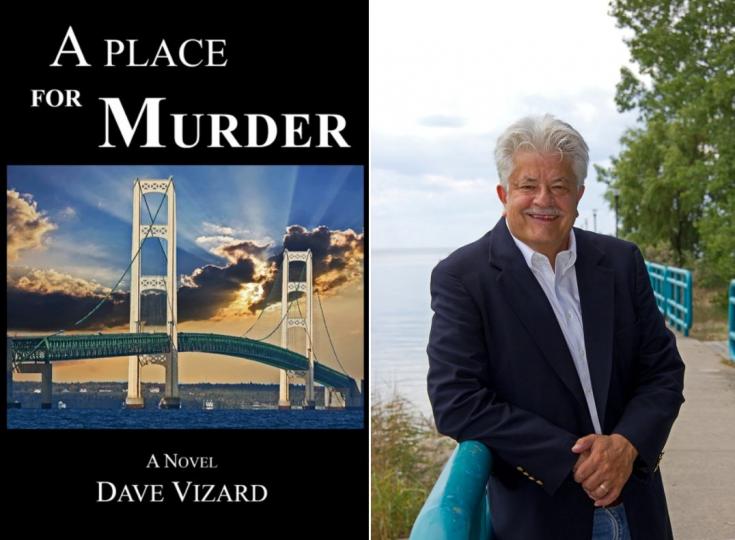 Dave Vizard is a former award-winning newspaper and magazine journalist who now writes fiction from his home near Lake Huron in Michigan. Vizard has taught journalism on the college level and now works with young writers through the Huron Area Writers Group, an informal organization that he co-founded and helps authors at all levels get published. Each of Vizard's stand-alone books is based on real-life events that he experienced as a journalist. Each of the characters in his novels is inspired by real people. His storylines are tight. His characters are rich, fully developed and believable. "A Place for Murder" is his fourth novel in the Nick Steele series. As our Author of the Day, he tells us all about this book.

Please give us a short introduction to what a Place for Murder is about.

“A Place for Murder” is about illegal immigration and the evils of human trafficking. News reporter Nick Steele investigates and writes about the ruined lives and death that comes from it. Undocumented workers are in every corner of America, not just at the southern border or in the border states. Our economy depends on lots of cheap labor, so there is plenty of work for them. Illegals come here for the economic opportunities and freedom, but they have no rights and very few protections, which makes them vulnerable to predators - human traffickers.

What inspired you to write about a hostess who gets pulled into the dark world of human trafficking?

Donald Trump and federal court records. When the now president was campaigning for the job, he made immigration and defense of the southern border a bigger issue than it was: “Build the Wall, and make Mexico pay for it.” At the same time, Michigan had experienced a number of high profile federal court cases where the government prosecuted dairy farmers for recruiting, harboring and moving illegals around the state through a complex network. I decided the timing was right for a novel and wrote it in less than a year.

Tell us more about Nick Steele. What makes him so special?

Nick Steele is special because of his passion for doggedly chasing the truth and writing about what he finds. He is a noble and honorable man who is flawed. He works too much and he drinks too much, and both get him into trouble. Nick has a great sense of humor and people like him because of his sincerity. As a result, he conducts great interviews. His interview subjects open up to him and tell more than they should, which always makes a great news story.

Why did you title this book A Place for Murder?

Because Michigan becomes “A Place for Murder” as a result of the human trafficking that occurs in the story. The title becomes more obvious as readers finish the story.

How much research did this book require from you in order to describe the world of human trafficking in detail?

I spent weeks going through court records to figure out how the human trafficking network in Michigan was set up. I interviewed immigration officials in Detroit as well as regional ICE agents, the men and women who patrol Michigan looking for illegal immigrants. I also interviewed dairy farmers to find out about their very labor-intensive operations. And I talked with immigrants who were pulled into the world of human trafficking. Their stories are filled with tragedies and triumphs. One key aspect of the story, how difficult and complicated it is to move the bodies of the deceased across state lines, came from interviews with funeral directors.

I’m a pretty good communicator. I’ve taught high school and college students. I worked in the health-care field for a short time after my journalism career ended and now I’m a Realtor, helping folks buy and sell property in the Thumb of Michigan. I’m also a voracious reader. My goal is to read and write something interesting every day.

How much of yourself have you written into Nick?

I’ve certainly written some of myself into the Nick Steele character. But I like to think that Nick is a combination of the best reporters I have worked with or who have worked for me in 35 years in the newspaper and magazine business. Nick has great instincts about people and he does not back down when chasing the story. He does what it takes. I once had a city editor who used to send reporters out on tough assignments by saying: “Go get the story, or don’t come back.” That’s what Nick does. He gets the story and always comes back for more.

Your book is fast paced and a page turner, according to readers. How did you pull this off?

My storylines are very tight, which I attribute to my journalism training. I’m not much into long-winded puffery, either as a reader of fiction or a writer of it. As a reader, if I find myself skimming or gliding through parts of the story then that tells me the color and descriptive detail is too thick and the writer has not done a good job of blending it into the story. And I find that sometimes writers are simply over-doing the color and detail, giving readers way more than the need or want. It’s a fine line to walk. I tell my stories through the Points of View of several main characters and they keep the story moving from one plot point to the next.

Did you plan the plot out before you started writing, or did some of it just "happen" along the way?

I always have a general overview of the story before I start writing. I need to know what the story is about and where it’s going. I keep that in mind as a I write. I use the story arch as a road map to completion. But, often, the story takes a lot of twists and turns as I travel through it. I add and delete as I go, and as I rewrite. Sometimes I wake up in the middle of the night with a plot twist, or a good piece of dialogue, or some descriptive detail. Or, I can be out with real estate customers and I will hear or observe something that would be great for the story I’m working on or the one that I plan to write next. I routinely jot the idea down. You never know where your next inspiration will come from. One thing I tell students is to never turn away from inspiration, turn it into perspiration – write it.

I write in flurries, like I used to when I was a newspaper and magazine columnist. However, the overall writing process is continuous. When I’m in writing mode, I block out 2-3 hours a day where I have no distractions except favored music selections, which I play low volume. I will drink 2-3 cups of coffee and pound out 2,000 to 3,000 words, then walk away from it. Through the course of the day, what I wrote in the morning tumbles through my mind no matter what else I may be doing. After dinner, I rewrite and clean up what I’ve written. Then I go for a long walk and map out in my mind what I’m going to write the next day. It’s ongoing, which my wife says often makes me absent minded. Of course, that’s silly. Now, what was I talking about?

I’m working on the next story in the series, which takes place in Key West. My wife and I recently returned from an extended vacation in the Keys where I did a substantial amount of research. The next story will make the hair on the back of your neck stand on end. I’m also tinkering with a short-story collection outside the series.

Love meeting and talking with readers. Visiting book clubs where my stories have been read by all is one of my favorite things to do. Great discussions and ideas exchanged. Always enjoy the interaction. My website is davevizard.com and I write a blog through Goodreads https://www.goodreads.com/author_blog_posts/18205950-scene-from-zookeeper-s-wife-inspired-sequence-in-a-place-for-murder . I also respond to email: [email protected] .