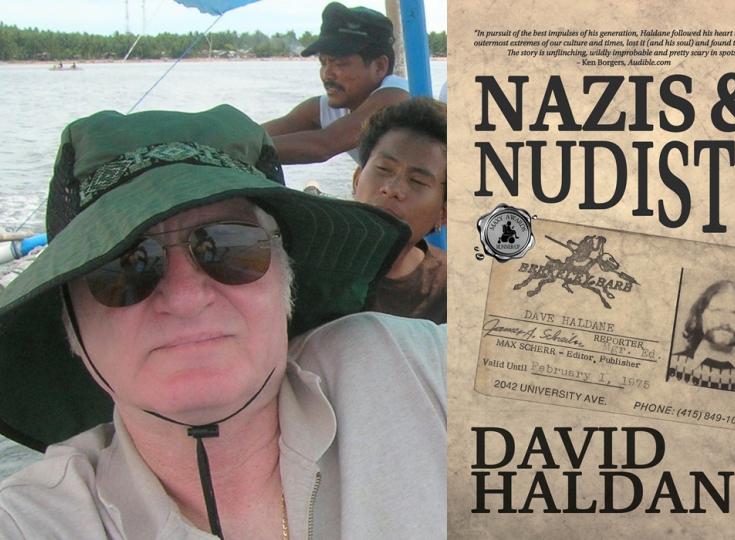 The truth is often much stranger than fiction - and this rings especially true about the life of David Haldane. This former journalist has experienced so many weird and wonderful things in his life, that he decided to write a book about it. As our Author of the Day, Haldane chats with us about life in the 60s and 70s, reveals why he stopped being an activist and talks about his green, leafy space.

Please give us a short introduction to Nazis and Nudists

Nazis & Nudists is a memoir, the story of my own ragged journey from the revolutionary counterculture of the 1960s and early '70s, through the confusion of its aftermath and, finally, into the arms -- on a remote Philippine island -- of the woman who would become my wife. At its center it is a story of the search for meaning, for love and, ultimately, for a place to call home.

Have you always wanted to write a biography? Why did you choose to do so now?

I think almost everybody fantasizes, at one time or another, about writing their life story. For me it was never much more than that until one day my oldest friend, someone I've known since high school, said, "Your life is like a book; you should write it." The writing began very tentatively, almost as an experiment, but as it progressed I began to realize that I had been  in many places and experienced many things that were kind of emblematic of a particularly colorful period of American history; that my life, in a sense, seemed to have followed the same arc as that history. Then the challenge became to discover the meaning of the arc, the theme of the story as-it-were. Soon the challenge became an obsession, and the book was born.

What, would you say, is the greatest difference between how people lived in the 60s and 70s compared to now?

In the 1960s and 70s, we -- at least my generation -- did what we did without much thought about how it would affect our future or whether people would react in a negative way. We believed that we were the  vanguard of a revolution that would change everything, would sweep away the past rendering it mute and irrelevant. That past and present, in other words, would soon be dead; everything was new.  These days it seems that one can barely sneeze without everyone knowing about it and imposing major repercussions. Perhaps it's the advent of the Internet and social media, but I think most people now feel as if they are living in fishbowls monitored by highly critical men in white coats who would just as soon flush the erring fish down the toilet as feed it. It's political correctness gone awry.

Did you find it hard to share some of your very personal experiences with the world?

I wasn't really thinking about the audience as I was writing the book; it was more like writing a confessional to myself searching for the theme and story line that tied it all together. Editing subsequent versions, of course, I became more aware of the potential impact some of the personal revelations might have. To be honest, not all of them made it into the final draft. Most of them did, however, probably due to my early training as a journalist to always tell the story and the consequences be damned. I have developed a fairly thick skin over the years. To those I wrote about whose skins are thinner, I tried to be kind.

You chose to pull away from activism. Why?

Ultimately I realized that I was more interested in seeing the world as it is rather than as I want it to be. That's very difficult to do as an activist because it's almost impossible to be objective and still maintain your passion. I also believe that it is the perspective that produces the best writing; activist writers tend not to be very good ones.

How much has the time when you worked for an underground newspaper shaped your career as a journalist?

I cut my journalistic teeth writing about people who were unusual, radical, different or in some way out of the mainstream. Later, as a mainstream journalist myself, that perspective continued to inform my reporting. Even in what seemed like an ordinary situation, I would look for that which was different, unusual, surprising, radical or unexpected --  and therein lay the story.

The truth is often stranger than fiction. Would you say this rings true about your life?

Absolutely. Many people have suggested that I try my hand at fiction and I have often been tempted to do so. What always stops me, though, is the inability to make things up that are more interesting than what I observe in real lives, both my own and those of others.

You chose to write your biography as a series of essays. Why did you pick this approach?

I think it reflects my career in journalism, most of which has been spent writing short pieces for newspapers and magazines. I am very accustomed to -- and comfortable with -- the short form. It also stems from the fact that significant portions of the book evolved from pieces, both published and unpublished, that I'd written over the years about various things that were going on at the time. Like most of my writings, these were relatively short pieces that appeared in -- or were written for -- newspapers and magazines.

Tell us more about the title of your book. Why “Nazis & Nudists.”?

It comes from two specific chapters of the book by those names. The one called "Nazis" is about my close relationship with a young German with whom I lived in Berlin in the early 1970s. My mother was a Holocaust survivor and his father, it turned out, had been a Nazi. The relationship was pivotal for both of us, a reckoning, as-it-were, with the karmic intertwining of our pasts and the its cosmic impact on our futures. The chapter called "Nudists" is about the summer I spent camping out with a bunch of hippies on a nude beach in Greece. In a larger sense, though, the title, I hope, evokes the cultural extremes of the era in which most of the story unfolds.

How long did it take you to finish this book?

It took a year, more or less, of writing at odd times, usually in the middle of the night or early morning. whenever the memories started flowing. I actually wrote much of the first draft on a cell phone kept by the side of my bed. Later I transferred it to a tablet and, eventually, to my desktop computer.

The green leafy space is the place we all long for, that territory of the heart or mind or even actual geography where we feel at peace, in harmony with the universe and most completely ourselves. The book ends with my finding it on a remote island in the Philippines which I plan to make my home. Whether that is truly my green leafy space, I suppose, remains to be seen.

I currently live in Joshua Tree, California, where I write, produce and broadcast news stories and features for the local FM radio station. I also free lance for various magazines and am working on an audio version of Nazis & Nudists. Though I'm certain there will be another book, I have not yet settled on what, exactly, it will be. Perhaps a sequel to Nazis & Nudists about building -- and eventually occupying -- that  island house in the Philippines.