David A. Willson - Passionate about Technology, Faith and Fiction

David A. Willson - Passionate about Technology, Faith and Fiction
Posted on 29th of May, 2018 by Naomi Bolton 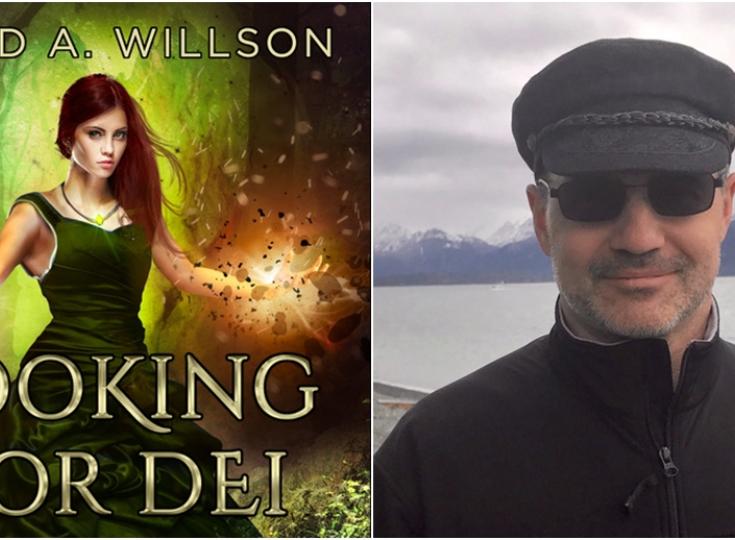 David A. Willson has worked as a restauranteur, peace officer, and now, author. He is passionate about technology, faith, and fiction—not necessarily in that order. Looking for Dei is his debut novel, and as our Author of the Day, he tells us all about it.

Please give us a short introduction to what Looking for Dei is about.

Looking for Dei is a young adult fantasy tale told from multiple perspectives to give a rich, multi-faceted story. It begins with a bang, then races forward to the time frame of the story, involving a teenage girl who is unwittingly part of an earth-shaking prophecy. The story has many twists and turns, and the character arcs converge into a cohesive, action-packed finale that leaves room for a sequel without dropping a cliffhanger on the reader. I always hated cliffhangers.

Tell us more about Nara Dall - what makes her so special?

Nara is passionate and generous but is plagued by a terrible secret: she has magic that could save her village but isn't allowed to use it. Many will identify with her plight when her well-intended acts go terribly wrong and she is swept away by the consequences.

I think it is her growth through the story that makes her special. I haven't met too many teenage girls who are ready to do battle with professional killers, practicing an expertise with violence that would awe some superheroes, yet we find that often in this genre. Nara is not that person. She is real. She's a young adult who is in a tough spot, experiences the fear and frustration that we would all feel, and finds a way to work through it. Readers will cheer as she attains wisdom, abandoning her childish naiveté and coming to terms with the reality of the dark forces about her. When she realizes her role in the world, will she embrace it or run away?

Your book contains quite a couple of twists - did you plan them out before you started writing?

One or two were planned, but the twists I'm most proud of just happened as I went along. I guess I'm not smart enough to plan everything in advance. These surprises required some retooling of the earlier chapters in order to accommodate them, and this novel was definitely written in a non-linear fashion. Sometimes the best ideas just don't rear their heads when you need them, so one has to find a way to wiggle them in when they finally show up!

What makes living in Alaska such a great source of inspiration for fantasy and adventure?

Every day on my way to work, I drive past some of the most beautiful peaks in the world - the Chugach Mountains. When they are snow-capped, like they are now, they are breathtaking. The raw beauty in this state is like something out of a movie (or a book!), and provides ample inspiration.

It doesn't hurt that I've also been blessed with the opportunity to see many different places in Alaska, from the temperate southeastern cities of Sitka, Juneau, and Ketchikan, to the heavy snowfall of Southcentral Alaska, the open areas of Western Alaska, and the heat and extreme cold of the interior. There is truly nothing like putting on a parka and standing outside at minus 50° to watch the Aurora Borealis. It is an adventurous land, and the wonder it brings can't help but make its way into my writing.

Tell us more about the title of the book. Why did you call it "Looking for Dei"?

One of the primary themes of the book is a spiritual, albeit not a religious one. More than 90% of human beings believe in some sort of higher being, a deity. Some think that this being is active in our lives, and can be known. Others think that he is absent, a creator, but perhaps not present anymore. Still others think it's impossible to know. I'm a man of faith, and I've seen some of the powerfully positive things people can do when they are motivated to serve others through faith, and I wanted to speak to this in my writing.

In the story, Dei and Kai are believed to be the twin gods that play a central role in the world-building, with Dei being the god that is worshipped by the religious folk. As Nara journeys through her troubles, she continually looks for help, overwhelmed as she is. In this, she seeks Dei repeatedly. She looks for him, hence the title.

I'm pretty good at eating tacos. Mad taco skills. I like carne asada tacos best, with a nice flank steak that marinated overnight before grilling it. And lots of cilantro, too. Gotta have cilantro.

I also enjoy working with Photoshop, brewing beer and wine, playing video games with my kids (albeit quite badly so that's probably not a skill), and I can solve the Rubik's cube. I'm not wizard-fast like those geniuses on TV, but I can do it every time.

Many people dismiss the genre as pure escapism and nothing more. What would you say is the purpose of fantasy?

It is escapism. That's part of its charm. But that's not the only purpose. Fantasy worlds open up our imaginations, allowing us to think about things that aren't, but maybe could be. They allow us to engage in wondrous adventure that isn't so easily accomplished with other genres.

I'd compare fantasy fiction to math. How many people use math on a regular basis in their jobs, or at home? Very few, I would say. Yet we have had years and years of training in fractions, algebra, angles, and sums in our schooling. Why? Math teaches problem-solving skills. Math teaches attention to detail. Math teaches focus, discipline, and so many other things. Math isn't about math, it's about so much more.

Fantasy is like that. It's not about the other worlds, exclusively. It's about imagination. It's about freedom. It's about thinking differently. It invokes creativity, and exploration, and a break from the mundane-a shedding of the restrictions provided by the daily grind of life. Like math, it's about so much more and brings benefits that we did not expect.

Looking for Dei was your debut work. What has the experience been like, so far?

Wow, what a ride! I really didn't know what I was getting into when I started writing this novel, but once I had, I couldn't stop. Writing a story like this is a great adventure. It starts with so many possibilities, and it's hard to narrow them down as you move forward. Not just in the development of the tale itself, but the crafting of the cover, the interior design, the endless rewriting, and editing. And editing. And editing.

But it's been worth every minute of it. I've learned so much about the book business that I never knew before and I'm hooked. There will be many more.

Yes, they do, those rascals. The plot that I crafted at the beginning of the project is not exactly the story that I finished with. As I write, I find that the subtleties can change the path I had intended, and entirely new options open up. It's like a crossroads, and you can't go both ways. Robert Frost spoke about the road less traveled, and how it made all the difference. Writing is like this, and it seems that the character arcs in Looking for Dei seem to follow Frost's maverick style on a regular basis.

Another novel, of course! Looking for Dei stands well on its own, but begs for a sequel, and I'm in the process of crafting that now. I've already got the cover, the outline of the story, and have begun moving forward. I can't wait to see what Nara does next!

I'd welcome visits to my author page at http://www.davidawillson.com, Facebook at http://www.facebook.com/lookingfordei or say hi on Twitter: @dav_willson