Deb McEwan - Writing from a Dog's Perspective
Posted on 20th of July, 2018 by Naomi Bolton 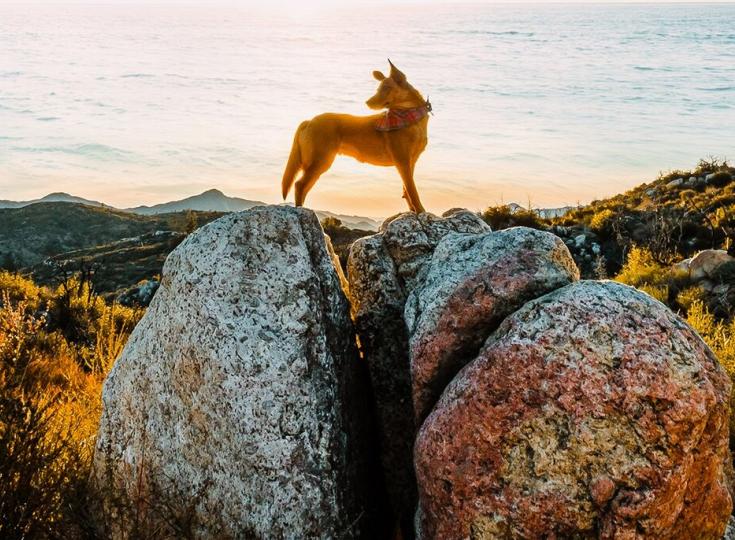 Following a career of over thirty years in the British Army, Deb and her husband Allan moved to Cyprus to become weather refugees. ‘The Island Dog Squad’ is a series of novellas inspired by the rescue dog Deb and Allan adopted this March. As our Author of the Day, Deb tells us all about it.

Please give us a short introduction to what the Island Dog Squad is about.

‘The Island Dog Squad’ is told from Sandy the rescue dog’s point of view:

What if she had been the only blonde puppy born in a litter of adorable black puppies, and the mistress had a reason for disliking blondes?

What if she had almost been attacked by a nasty-looking big fish with massive teeth, then another, prettier big fish saved her?

And what if she’d been washed up on a beach and saved by uniformed dog trainers who taught her skills your average dog could not even imagine?

If you prefer visuals, take a look at the book trailer https://youtu.be/rR0ywYeJLxY

Was Sandy or any of the other dogs inspired by anyone you know?

On 14 March we adopted Sandy from the rescue centre on the military base near to where we live (https://www.facebook.com/BARCCyprus/). Unfortunately, dogs are often found abandoned and wandering the streets and countryside. Sandy wandered into one of the local villages last September. She was found by the wife of a serving officer and taken to the dog section before a place was found for her in BARC. It wasn’t until February that we decided a dog would fit in with our now, less hectic lifestyle. I’d seen photos of a dog named Bo, went to look at her but didn’t get past Sandy (who was then called Sansa).

As soon as she came home with us I wondered about her past. Noise makes her jumpy and she doesn’t like water, so what happened to make her like this? I started thinking about what Sandy would tell us if she could speak and that was how ‘The Island Dog Squad’ came about.

Bunty briefing Fish and Digger on their next mission

You worked for the British Army for over thirty years. How has this influenced you writing?

Life was very different for women in the Army when I joined in 1979. My friends wanted me to write a story about my experiences but I wasn’t sure it would be that interesting. So my ‘Unlikely Soldiers’ series is inspired by my time in the Army, along with that of some friends (and others who were definitely not friends) who I met during my career. There’s also a lot of fiction and I’ve left it up to readers to work out which parts are true and which are not. The first book is currently free on Amazon.

How do you think you’ve evolved creatively as an author since you published your very first book?

My hope is that each new book is better than the last. I’ve just taken my ‘Aliens Guide’ series off Amazon to be re-edited because I know it can be better, and I don’t want anyone to read one of my books if it’s not the best it can be.

Being an Indie-Author involves arranging everything yourself, or paying for services of talented individuals. Marketing was a mystery to me and has been a steep learning curve. I wish there were another twenty hours in my day so I could do everything I need to!

I write a short story outline. This usually does the trick and I can then go back to the project I’m currently working on. I’m usually absorbed in my work in progress so it’s not generally a problem.

Do you have any interesting writing habits? Favorite writing spot, things you do for inspiration etc.?

I’m most creative first thing in the morning so I get up at six and write for an hour before going to work. If I have plot issues – or any other real-life problems for that matter – walking helps to clear my mind and put my thoughts in order.

What do you hope readers take away from the Island Dog Squad books?

Some people are cruel and I don’t think any book can stop that, unfortunately. But if this series helps to raise awareness of the plight of rescue dogs I’ve done my job – and I would love it if readers enjoyed the story too!

I’m working on the third novella in ‘The Island Dog Squad’ series. I have plans for ‘Unlikely Soldiers’ book four, ‘The Afterlife Series’ book five and a few other ideas I’m toying with about a James Bond type of story where the main protagonist is a woman.

Details of all my books are on my website, where I blog occasionally, from a dog’s point of view. https://debmcewansbooksandblogs.com Readers who subscribe to my mailing list will get a free e-book, but I only email when I have news about my books. My Facebook page is the best place to interact with me. https://www.facebook.com/DebMcEwansbooksandblogs/?ref=bookmarks