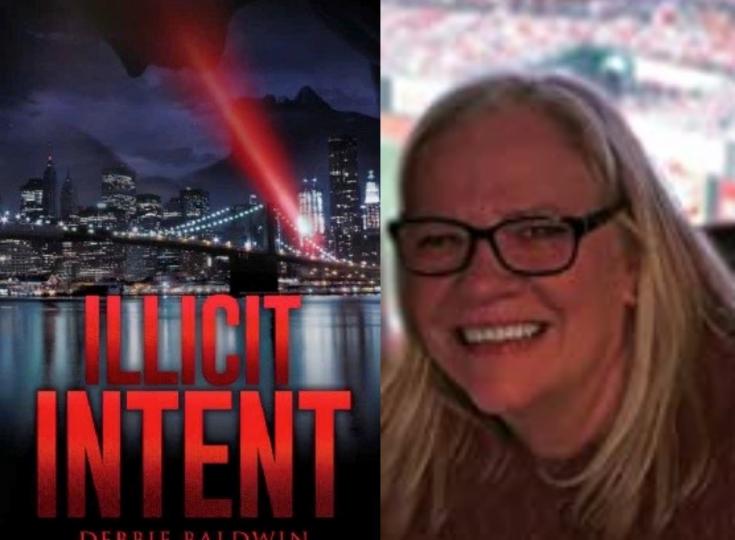 Debbie Baldwin is a successful print media and television writer. She is a graduate of Princeton University and the University of Virginia School of Law. Debbie and her husband live in Saint Louis, Missouri with their puggle, Pebbles. They have three children in college. As our Author of the Day, she tells us all about her book, Illicit Intent.

Please give us a short introduction to what Illicit Intent is about.

I want to start off with a deeply heartfelt thank you to your readers. Your reviews and ratings of Illicit Intent and False front have been amazing. As you well know, indie authors work hard to try to get their books seen. I owe ManyBooks a huge debt of gratitude for helping me in my effort.

Illicit Intent is an action-packed romantic suspense novel. Calliope Garland is an investigative reporter working undercover at a Wall Street hedge fund managed by a sketchy CEO. When something goes wrong and Calliope crashes the system, she leaves with the only copy of some very valuable financial data. She is also unwittingly in possession of a priceless work of art. When the CEO is murdered, the list of people after Calliope is long and deadly. With her life on the line, she turns to Miller "Tox" Buchanan, a six-foot, five-inch former Navy SEAL. Tox is battling demons of his own; Calliope may pose more of a threat to him than the bad guys beating down her door. Regardless, Tox is a protector, and he will do what it takes to keep this beautiful enigma of a woman safe.

This is Book Two in the Bishop Security Series, and I was so excited to tell Tox's story. He's a unique character in that unlike most of the alpha-male, commitment-phobic, ex-military guys we read about in romantic suspense, Tox battles the opposite problem. After a painful childhood and some bad early relationships, Tox has to work to keep his possessive instincts in check. The other aspect of this novel that has long fascinated me is the infamous robbery of the Isabella Stewart Gardner Museum in Boston. It's a hot topic right now with a popular podcast and Netflix movie documenting the event. I used the real-life events surrounding the robbery to put my own fictional spin on the heist.

Tell us more about Calliope Garland. What makes her tick?

Calliope is more than meets the eye. At first glance, she is a modern-day hippie. She's a yogi who flits from place to place, never putting down roots and never forming lasting relationships. Slowly Calliope evolves over the course of the book, and we not only see a more grounded, mature woman, but we also realize there is much more to this woman than meets the eye.

Why did you decide to involve a sketchy Wall Street hedge fund CEO in the story?

I'm a pretty fierce baker, but I keep it pretty simple. I make killer chocolate chip cookies with my failsafe recipe. I'm a trivia freak. I have three amazing kids in college, so hopefully, my mom-skills are on point as well.

This is book 2 in a series. Can it be read as a standalone? How do the other books in the series tie in with this one?

This book can absolutely be read as a standalone. I'm a bit of a freak about series books. I like to always start with Book One, but if readers are comfortable diving in, they won't miss a beat starting with this book.

That has to be Finn who is a supporting character in Books One and Two and has his own story in Book Four, Past Purgatory. He was captured on a SEAL mission and horribly disfigured. As a result, he's a rage-filled shell of a man who his friends can barely tolerate. It has been a challenge writing a character who is a "good guy" but so thoroughly unlikeable.