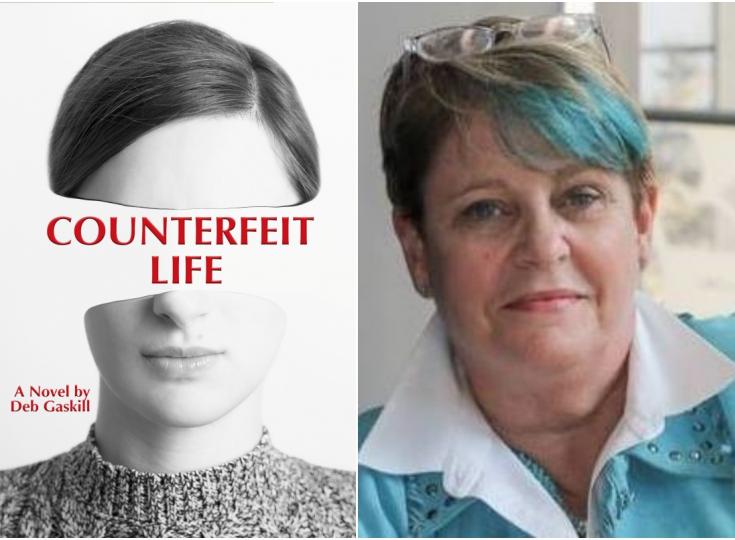 Debra Gaskill was an award-winning journalist for 20 years, writing for a number of Ohio newspapers and the Associated Press, covering the cops and courts beat. She is the author of the 12 books, many of them drawn from her career as a crime reporter. Her first series is Jubilant Falls series (Barn Burner, 2009, The Major's Wife 2010, Lethal Little Lies, 2013, Murder on the Lunatic Fringe, 2014 and Death of A High Maintenance Blonde, 2015). Her second series is the Fitz PI series (Call Fitz, 2015, Holy Fitz, 2016, Love Fitz, 2016, and Kissing Fitz, 2017). A fifth Fitz novel, Toxic Fitz, was published in 2018. Call Fitz can be heard as the first season in the podcast Fracktown Gumshoe. As our Author of the Day, she tells us all about her book Counterfeit Life.

Please give us a short introduction to what Counterfeit Life is about.

Counterfeit Life is the story of a woman, Lisa Harper, who discovers after her marriage that her Social Security Number is not hers and her birth certificate is forged. With her lawyer, Ames Flaherty, she sets about on a search to uncover the truth—and it’s a very painful truth.

What inspired you to write about someone who discovers that the social security number she's used all her life isn't hers?

Stories about children—babies even—who have had their identity stolen really resonated with me. How could someone steal the identity of someone so innocent?

Tell us more about Lisa Harper. What makes her tick?

Lisa worked hard to build her business, H&H Media, from a business she ran in her apartment to one of the most successful businesses in Columbus, Ohio. She believes she’s the daughter of Dr. Regina Harper, a fine arts professor at a small liberal arts college in the small hippie village of Jasper Crossing. She’s had an unconventional upbringing and has never known her father’s real name. When her mother dies of pancreatic cancer, begging Lisa to forgive her, Lisa has no idea what she’s talking about. Then she tries to change her name on her Social Security card.

Why did you pick the fictional Plummer County, Ohio as the backdrop for your story?

Plummer County is the setting for my Jubilant Falls romantic suspense series, the first books I ever published. The books include Barn Burner, The Major’s Wife, Lethal Little Lies, Murder on the Lunatic Fringe and Death of A High Maintenance Blonde. The stories center around the staff of a small town newspaper staff, their lives and the crimes they solve. Readers of that series will recognize a couple of the characters in Counterfeit Life.

The book has a great cover. Tell us more about it.

Isn’t it wonderful? I’m blessed to have two children who are both graphic artists, as well as very gifted in visual arts. My daughter Becky made the cover, but it’s a very collaborative process. We select a group of images that represent the story best, then she narrows them down to what will look best visually and then we work from there collectively choosing the fonts and layout. There was something about this image that I thought embodied Lisa Harper. When you look yourself in the eye, you believe you are the person looking back at you. Lisa can’t do that.

I love the fiber arts. We raise llamas and alpacas on our farm. I take the animals fibers and have it commercially spun into yarn. (Occasionally, will find a fleece I love and then spin it myself.) I then dye it, and weave and knit with the yarns. I have a small yarn shop Checkered Flag Fibers, in Springfield Ohio.

You used to work as a crime reporter. How has that influenced your writing?

In many, many ways. It has given me grist for my story mill—I have covered kidnappings, murders, accidents, any version of man’s inhumanity to man, you name it. It’s also amazing to me what people will do to cover up their crimes. It has also given me a real ‘deadline’ mentality: if I say a book is going to be done by June, then it’s done by June, if not May 31.

That’s where the newspaper deadline mentality comes in. Even though the professionals say people really can’t multi-task, I disagree. Spend a day in the life of a newspaper editor! I can work on several projects at the same time—in fact I am right now!

I always know the opening scene and the ending scene before i start writing. Also, I usually know the method or cause of death. If I have any questions about anything in the book—the setting, the weapon, the forensics—I research heavily. This book was tough to research because it involved forensic DNA and forensic genealogy.

Yes! All the time. You just have to roll with it and let them take you where they want to take you.

I try to write five-six days a week and give myself a daily quota of 500 words. For me, that’s the average length of a daily news story. Many times I’ll go over that, but some days, I’ll not make it. There are days when I reread my stuff and think I’ve written better grocery lists and delete it all.

Most of my writing happens in the morning, after I’ve cleaned out the llama barn. I’ll hit it for a couple hours, then have lunch, write for a couple more hours, then take a break about three. I’ll give myself some time to have a cup of coffee, or a snack then it’s back out to the barn to clean again and feed the llamas. After dinner, I’ll watch TV, maybe snooze a little, then writing from about midnight until three a.m. Then it’s to bed and up again to do it all over again.

Any specific projects you are working on right now?

I’m currently working on the sixth book in my Niccolo Fitzhugh private detective series. My son Scott and I are currently turning the series into an audio book—it’s currently available as a podcast called Fracktown Gumshoe on Stitcher, Apple Podcasts and Podbean. The first season comes from the first book, Call Fitz. Once the first season is done, we will compile it into an audiobook. I’m at work on the audio script for the second season of that, titled Holy Fitz, which should begin later this year. 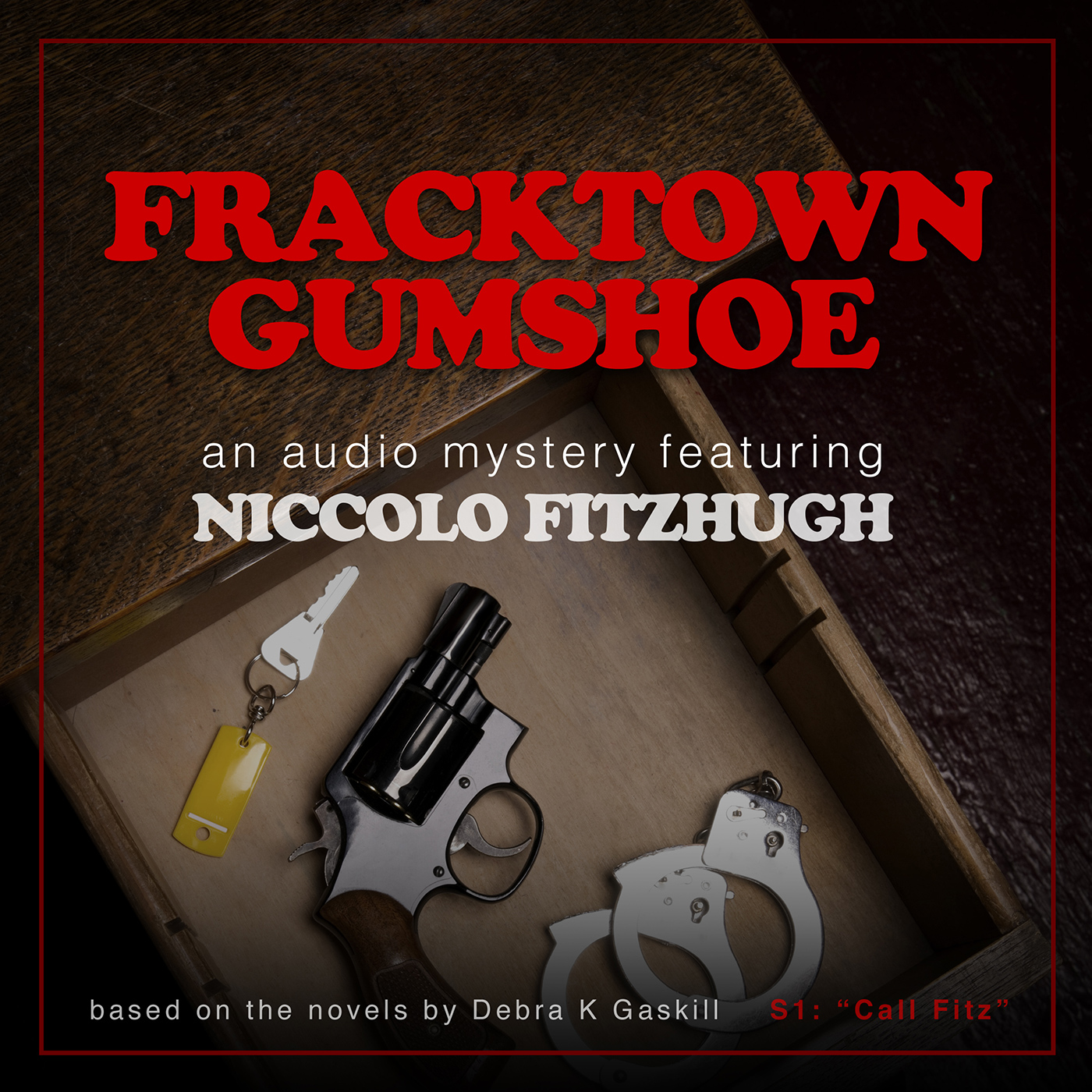 I’m very active on Twitter @DebraGaskill and announce episodes of the podcast there every week.

You can also find me on my Facebook author page, https://www.facebook.com/authorDebraGaskill/

Find my novels at www.debragaskillnovels.com

Listen to the podcast at: https://podcasts.apple.com/us/podcast/fracktown-gumshoe/id1489430092