D.F. Bailey - Mystery Thrillers With Many Twists
Posted on 18th of November, 2019 by Naomi Bolton 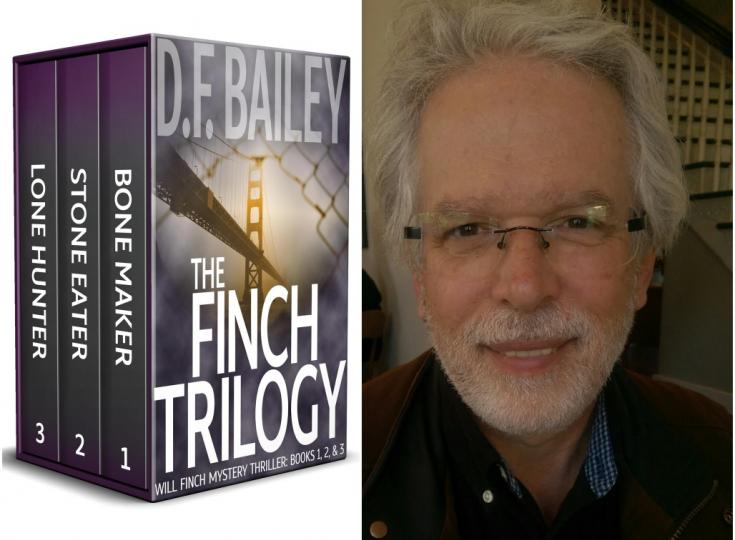 An Amazon bestselling author, D.F. Bailey is a W.H. Smith First Novel Award and a Whistler Independent Book Award finalist. In 2015 D.F. Bailey published The Finch Trilogy -- Bone Maker, Stone Eater, and Lone Hunter -- three novels narrated from the point-of-view of a crime reporter in San Francisco. Second Life (2017) is the first in a series of stand-alone books that follow the characters established in the trilogy. The series prequel, Five Knives, came out in 2018.  As our Author of the Day, Bailey tells us all about The Finch Trilogy.

Please give us a short introduction to what The Finch Trilogy is about.

The central character in The Finch Trilogy is Will Finch, a crime reporter based in San Francisco. Finch was a Military Intelligence officer during the Iraq war. However, when we meet him — ten years after his discharge — he’s recovering from a family tragedy that almost destroyed him.

The first book in the trilogy, Bone Maker, begins when Finch is sent to a small town on the northwest coast of Oregon to report on the death of a key witness in a financial fraud trial that involves a US senator.

In Stone Eater, the second book, we meet Eve Noon, an ex-cop and the best friend of the senator’s deceased daughter. Was the daughter murdered, or did she jump from the Golden Gate Bridge? Finch and Eve decide to investigate together — for better or for worse.

The final novel, Lone Hunter, begins in Russia. Finch and Eve meet Alexei, an ex-KGB officer stationed in Washington. The gathering momentum from all three novels rises to a crescendo that I know will completely shock any reader who loves mystery thrillers. How can I be so sure? Because the ending came to me as a total surprise!

At the risk of appearing too salesy, let me add that this week only — until Nov. 22 — The Finch Trilogy is free on Amazon. In addition, the first sequel, Second Life, is on sale for 0.99. And to celebrate the launch of the fifth book in the series, Open Chains, I’ve dropped the regular price to 2.99 until Nov. 22.

What inspired you to write about an ex-cop and a reporter who have to work together?

I love stories with strong women characters. When Finch realizes that Eve is an ex-cop, he knows she has the skills and experience to help him investigate the biggest story of his career. It doesn’t take them long to discover their mental and physical chemistry — which soon becomes an unbreakable bond.

Did you plan from the start to make this into a trilogy? How do the other books in the series tie in with this one?

Yes, I planned to write a trilogy from day one. Previously I’d written four stand-alone thrillers. So, I wanted to give myself a new challenge. And wow — did I ever land a whale! I had no idea how the trilogy would evolve. Apart from understanding my key character — that was the jumping-off point — I simply trusted my story-telling instincts day by day.

Now The Finch Trilogy is the foundation for the continuing novel series — plus the prequel novel, Five Knives, which readers can download for free at my website, www.dfbailey.com.

Readers say that the books are hard to put down. How did you pull this off?

I’m delighted so many readers feel this way. The character traits and plot twists arise organically in the process of writing. You see, writing is a very solitary, lonely obsession. To keep me engaged, the story has to come as a surprise. When the magic begins to happen — and it can take a while — then I become fully immersed in the project. At that point, the novel seems to write itself and I can’t put it down, either.

Which book in this trilogy is your personal favorite?

Who are some of your all-time favorite authors, and why?

How do you think you’ve evolved creatively as a writer since you published your very first book?

Experience has taught me two essentials. First, permit the novel to find its own way. Second, embrace the discipline required to complete a long, complex narrative.

I treat my writing as a day job. Monday through Friday I try to write for two or three hours. I usually get to my computer around 10 AM, when I respond to email, deal with any book marketing and PR chores. Around 10.30, I open the book file I’m working on and read the previous day’s work. From there I carry on. On the odd afternoon, I’ll walk to my local coffee shop and continue writing or do some editing. Overall, my writing day is based on a simple routine — which makes it easy for me to follow five days a week.

For the next few months, I’m going to concentrate on book advertising, marketing, and sales — which I’ve neglected for too long. However, I do have a new story percolating in the back of my mind. The context for the novel is the phenomenon known as the Extinction Rebellion. The battle is being taken up by mid-adolescents around the world and I want to do anything I can to support them. I hope to begin the new novel in January.

The best way to contact me and explore my book catalog is on my website: dfbailey.com. Don’t forget to pick up a free copy of Five Knives. 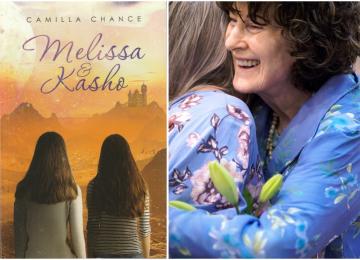 Camilla Chance - A Coming of Age Story With a Twist
FEATURED AUTHOR - Camilla Chance was born in London in 1940 and moved to Australia as a young girl. She wrote her first novel at 18 but her father forced her to withdraw from this contract as she was still legally his "property" until she was 21. She kept writing, however. She graduated in Arts from Melbourne University. Wisdom Man, was her instant Australian bestseller and winner of USABookNews.com Award for best multicultural work.