Diane Zinna - A Mesmerizing, Disturbing, and Heart-Wrenching Read About Loneliness and Grief

Diane Zinna - A Mesmerizing, Disturbing, and Heart-Wrenching Read About Loneliness and Grief
Posted on 3rd of December, 2021 by Naomi Bolton 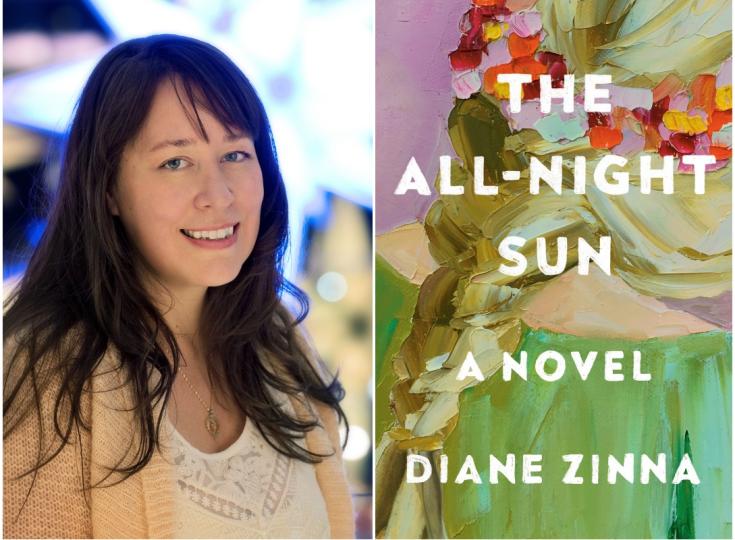 Diane Zinna is originally from Long Island, New York. She received her MFA from the University of Florida and has taught writing workshops for more than a decade. She formerly worked at AWP, the Association of Writers & Writing Programs, and in 2014, Diane created the Writer to Writer Mentorship Program, helping to match more than six hundred writers over twelve seasons. Diane has become well-known for her popular, online grief writing sessions that have grown each Sunday since the start of the pandemic. Diane lives in Fairfax, Virginia, with her husband and daughter. The All-Night Sun is her first novel. As our Author of the Day, she tells us all about it.

Please give us a short introduction to what The All-Night Sun is about.

My novel follows Lauren Cress, a young adjunct professor who has long been grieving the deaths of her parents alone. After an international student named Siri joins her class, the two bond quickly over loss, and the girl invites her to travel home to Sweden with her for the summer. Lauren thinks that Sweden at Midsommar will be a respite from her depression and isolation, but her past comes along for the trip, and her friendship with Siri is put to the test.

I know the kind of grief that Lauren deals with in the novel. It’s the kind of grief that can be both invisible and make you feel invisible. About twelve years ago, I had a dream that I had written a story about two women friends traveling by train through Paris. When I woke, I rushed to the computer and quickly sketched out an outline of twenty chapters. But when I started to write the book and gaze out of those train windows, it was Sweden I saw—the country I traveled through when I was grieving the deaths of my parents back in my twenties. And I was overcome with the urge to tell a story that felt true to grief the way I had experienced it then.

In which way is this an “unexpected love story”?

Oh, that statement was tied to this book by one of my favorite writers, Claire Messud, and I was so grateful for her words. There is a love affair that happens in the book between Lauren and Siri’s artist brother, Magnus, and it was so fun and exciting to write those passionate scenes. But I think it can also be said that this is a story about falling back in love with life after feeling like all hope was lost.

I am obsessed with learning languages. I studied Swedish for about four years after traveling there, I think as a way to keep the memories of that beautiful trip alive for me. It has been about twenty years since I’ve last been to Seoul, and I’ve been studying Korean for just about that long. And, like Lauren in the book, I compulsively taught myself Latin to keep my mind busy when I was going through a dark period of depression.

Oh, these are such good questions! I have been known to be an inventive writer when it comes to language, and I do feel that there are certain rhythms and ways of making a sound or image echo on the page that allows for deep feeling to rush forward.

There is this idea drilled into us as writers that we must always be moving the story ahead or the piece loses energy. But I’ve been working with an idea alongside my grief writing students lately, and that is that we can write toward the center of things instead of the end. Sometimes I will happen upon an idea or an image, and I’ll move away from my laptop and start writing longhand in a notebook about just that one idea, that one detail. It’s always going deeper that gives me the clarity I need.

What do you hope readers will take away from The All-Night Sun?

I love when I hear from readers that they appreciate that things are not wrapped up in a tidy bow for Lauren in the end. Because grief doesn’t work that way. We live with it, and it becomes part of us, and there are even parts of grief that we would never want to live without again. Instead of seeing her as “healed,” I want readers to see this woman, whose depression has kept her underwater, rising to the surface and taking her first deep breath after so long. And to know that there will be another. And another after that.

I love the idea that starting a book is like being in a small boat, and your job as a writer is to make it all the way across the ocean. I tell this to my students at the start of my book-in-a-year classes now, and I tell them something else: that there are enough little boat slips on the other side of the ocean for every boat to make it across and have its place.

Why did you title this "The All-Night Sun"?

It’s so funny you ask this! The original title for this book was, as you might have guessed, Midsommar. This was way back before the horror movie of the same title was released. I remember being told that it might be too hard for people to pronounce, so my editor at the time urged me to come up with something new. It was actually my agent who thought of The All-Night Sun, but I wasn’t entirely sold on it until my daughter, who was around three at the time, started singing that title in a Panera to the tune of “All-Night Long” by Lionel Richie. Then it stuck. I even went back and added the phrase to the story itself, when Lauren and Siri first arrive in Sweden: She took my arm, and we set out for a walk through her town, the all-night sun with us, a friend.

If there’s anything I’m famous for, it’s writing in my car. I do almost all of my creative work in the front seat of my car, and it’s been like that for over nine years now. It started back when my daughter was first born. My husband would encourage me to go across town to work at the café on my book, to take a break, but I was so attached to my baby that it was hard for me to leave the house. I would usually only make it around the corner before pulling into the small shopping center and working there. I thought that if there was an emergency and he needed me home quickly, I could make it home in less than a minute! Over time, it just felt like the safest place for me to write. That safety made it easy for me to relax into the work. To this day, the muses know when I’m parked in that lot. They float out to me from the storefronts of CVS and Ross Dress for Less!

For over a year, I have been leading grief writing sessions every Sunday for writers of all levels of experience, and it has been one of the most meaningful endeavors of my creative life. I started these during the pandemic, and the sessions have just grown and grown into a compassionate, inventive community unlike any I’ve ever known. I’ve started collecting the lessons and “portals” into a craft book. I’ve developed over 100 entranceways into grief stories. I know that people often avoid writing about their most difficult experiences because the process can feel re-traumatizing. But there are ways that people can enter their stories through “side doors,” in ways that feel safer, where there can also be breathing room and art.

For people who might like to study with me, I lead drop-in grief writing sessions every Sunday from 2–3pm, and they are truly for people with all levels of experience. Other offerings are always on my website at www.dianezinna.com. And I hope people will follow me on Instagram, which has become a home for the memoir work I do. Little flash stories bubble up there at @dianezinna, interspersed with the cutest goldendoodle pics you’ll ever see.