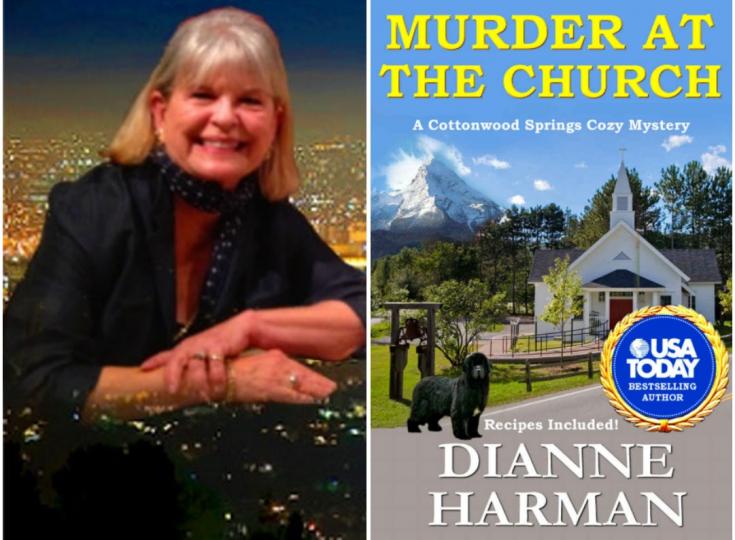 Dianne Harman is a USA Today bestselling author who brings the richness of her life experiences to her books. Almost every cozy mystery book she has published has topped the cozy mystery Amazon charts at number one.  As our Author of the Day, Harman tells us all about her book, Murder at the Church.

Please give us a short introduction to what Murder at the Church is about.

Murder at the Church is about a woman who has abused alcohol and drugs, but finally becomes clean. Unfortunately, she’s murdered while she’s in church, praying, during a difficult time in her recovery. Her daughter becomes an orphan and is taken in by a woman who ultimately finds out who the killer is.

Why did you pick Cottonwood Springs as the backdrop for this series?

I chose Cottonwood Springs as the setting because I spent my early childhood in Denver and spent a lot of time in the Rocky Mountains. It’s a fictional small-town, and with a ski resort and streams in the area, is open to both summer and winter sports and visitors.

Tell us more about Brigid.  What makes her tick?

Brigid is the amateur sleuth and the main character in the series. She grew up in Cottonwood Springs and returns after she became divorced, and the publishing company she worked for went bankrupt. She adopts a big Newfoundland dog, falls in love with her neighbor, and takes in Holly, the girl who is left an orphan because of her mother’s death. She also becomes a consultant to the sheriff’s office, after taking a number of classes in law enforcement.

Why cozy mysteries? What drew you to this genre?

I wrote several suspense novels, and while they were received very well critically, they didn’t do terrifically with readers. Someone wrote me and said one of them had so many elements of cozy mysteries they thought I might look into writing in that genre. I had no idea what one was, but read a number and decided, yes, that’s the genre I want to pursue. What I really like about it was that I could write about food and dogs in them. And so I did. Each of my cozies has five recipes in them and dogs are in all of them but two, which have cats.

You have traveled extensively throughout the world and used to deal in antiques.  How have these experiences influenced your writing?

I love to travel and certainly, the places I’ve been, the things I’ve done, and the people I’ve met, are reflected in the books. Several of my novels are loosely based on experiences I’ve had, such as Murder at the Cooking School, which takes place at a castle in Tuscany, where my husband and I studied Italian cooking. Murdered in Argentina is loosely based on a trip we took to Chile and Argentina.

How do the other books in the series tie in with this one?

All of the books in this series are standalone books, but they feature the same characters.

Holly, the young girl whose mother is murdered in Murder at the Church, definitely called for a series of her own. There are presently three books in the Holly Lewis Mystery Series with more coming. I saved all my babysitting money when I was a kid so I could buy Nancy Drew books. This series is my modern-day version on those books.

I don’t write them thinking I will deal with that certain problem. These are just things people deal with. None of us is perfect and we all have our own things to overcome. Quite frankly, there’s a lot in life that isn’t real pretty and is messy, but that is the real world and I try to keep my writing believable.

I work pretty much all day Monday thru Friday and in the mornings on the weekend. I usually start about 8:00 in the morning and work through until about 4:00 in the afternoon. I am in a very fortunate situation. My husband is a retired California Senator and the day he retired he told me that I had helped him through our marriage with his political career be entertaining, etc., and it was payback time. I’d just written my first book at that time, and he told me from now on he would take care of everything in the house and yard to free me to write. So he did, and so I have!

I do think some of his constituents would get a giggle out of their previous Senator sorting laundry!

I invite your readers to visit my website at www.dianneharman.com to find out more about me and my books. Another way to find out about my new releases is to follow me on BookBub, http://ow.ly/NDaE30m1lTU, Amazon, http://ow.ly/b6Bn30m1m8v or Facebook, http://bit.ly/2RXVf92

Thank you so much for this interview, and if any of your readers would like to get in touch with me, feel free to email me at [email protected]  I answer all my emails and love to interact with my readers. Again, thanks!