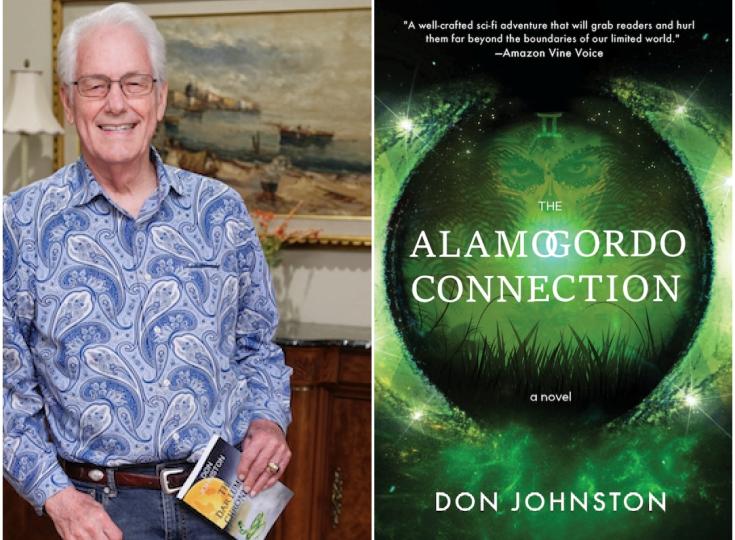 Don Johnston was born in East Texas a long time ago. When he was five years old, Don found a tattered science book with several pages missing. The first intact page showed a monarch butterfly emerging from a chrysalis. That incident was the ah-ha moment that drew Don into the world of science. Upon completing high school, he joined the Air Force and served as a jungle survival instructor in Panama. While in Panama, Don wrote a weekly gossip column for the base newspaper and won 2nd prize in a short story contest. After that, there was a 60-year gap in his creative writing. Following his military service, Don enrolled in Stephen F. Austin State University and got married. After graduating in biology and chemistry, the family moved to Houston where their only child, a son, was born. During the early years of my career, he wrote numerous technical articles and research reports and published several articles in trade journals but no fiction until recently. In 2014, his wife of 53 years passed away, leaving Don the patriarch of a small family--a son, a daughter-in-law, three grandchildren, and two great-grandchildren. His family is Don's pride and joy. He has been a member of Sugar Land Baptist Church since 1997 and has led Bible study classes throughout that time.

Please give us a short introduction to what The Alamogordo Connection is about.

In 2045, radio waves surge from the M13 star cluster, and President Rex Horn, a Planet X junkie, describes them as SOS, mayday, or cease and desist messages. Despite impeachment threats, Horn funds a program to intensify efforts to decode the signals by providing scholarships to outstanding college students.

Darien Segura and Carly Hansen participate in the M13 study as students at New Mexico State University. Darien, abandoned as a baby in the jungles of Panama, is an astronomy student, and Carly is studying parapsychology. While studying the radio waves, they discover low-frequency waves embedded in them. Carly believes ESP is the key to solving the riddle. They begin testing for the elusive psi phenomenon and locate traces of it in twins, including monkeys, dogs, and people, all born in Alamogordo. Carly refers to this oddity as The Alamogordo Connection.

During the study, they discover that Darien possesses substantial ESP, but not enough to decode the message without linking to someone else who also has it. Darien is convinced that he has a twin living in the jungles of Panama, and they embark on a journey to search for him. Upon trekking to an isolated village, they discover the witch doctor who delivered Darien. Just before she dies, the old woman reveals a startling fact.

Will it be enough to decipher ET’s message?

When I was five years old, I found a tattered science book with the first ten pages missing. The first intact page showed a monarch butterfly emerging from a chrysalis. I believe that incident was the ah-ha moment that drew me into the world of science.

After finishing high school, spending four years in the U.S. Air Force, marrying, and getting a degree in biology and chemistry, I began a career in science, the field I love.

Seventy-five years after the monarch butterfly incident, I retired from the corporate world and began to write as a hobby. Naturally, sci-fi was my genre of choice.

Why did you pick 2045 as the backdrop for your story?

2045 is 100 years after the first atomic bomb test in the White Sands National Park. A meteor strike near the Trinity Site 100 years later seemed like a good way to kick off the novel. The location also provided the opportunity to mention the UFO crash at Roswell in 1947, secret aircraft tests over the White Sands, and the like.

Tell us more about President Rex Horn. What makes him so special?

Rex Horn is bull-headed. Despite impeachment threats, he funds an effort to decode incoming radio waves from the M13 galaxy. Throughout the story, his enemies oppose him at every turn, yet he ignores them completely and does whatever he pleases.

What makes Darien Segura so special?

Darien, a twin, was abandoned in the Panama jungles as a baby. He possesses some ESP, but not enough to decode the radio waves without linking to someone else who also has it. Convinced his twin is still living in the jungles of Panama, Darien and his team embark on a journey to search for him. Upon trekking to an isolated village, they discover the witch doctor who delivered Darien and his sibling. Just before she dies, the old woman reveals a startling fact about the twins.

I speak fairly decent Spanish (which I learned in Panama). My military specialty was jungle survival, and I could still do it if necessary. In addition to science fiction, I’ve also written a book about investing, Stock-Picking Revisited, and was claiming to be a skilled investor until 2022 rolled around!

I believe one of my skills (not a secret one, I hope) is as a loving father, grandfather, great-grandfather, and a friend to many people.

Why did you decide to start writing fiction?

During my long career, I spent considerable time in labs and wrote dozens of research reports and technical papers. I enjoy writing, and upon retirement, writing science fiction seemed to be a natural extension of my career as a practicing scientist. While writing some of these scenes, I felt that I’d returned to my former job as a lab manager and was looking over the scientists’ shoulders as they struggled to come up with an answer.

What did you have the most fun with when writing The Alamogordo Connection?

I had fun setting up the scenes where the protagonists solved problems by using astute observation in the laboratory. In addition, I enjoyed writing about canoeing along a river through the jungle. I’ve taken this type of trip several times and have seen native villages like the ones described in the novel.

ESP in prominent in the novel, so I decided to use a cover suggesting the supernatural. A close look reveals a skull (or maybe a head). The Zodiac sign, Gemini, is visible on the forehead of the skull. I wanted the cover to be “spooky,” rather than regular sci-fi.

ESP figures prominently in this story. What do you find so fascinating about it?

I started trying to figure out how human brain waves could be mixed with high-intensity radio waves, and the idea of ESP popped up. Then, working on the idea that twins might be more likely to have ESP than non-twins, I explored the idea of searching for this psi phenomenon in fraternal, identical, mirror-image, and semi-identical twins.

You worked as a jungle survivor. How much of your own experiences did you include in the story?

The canoe trip and the native village descriptions were taken directly from my jungle survival experiences in Panama; however, the trips that I took were on other rivers, not the ones named in the novel. In The Alamogordo Connection, I wanted the protagonists to go deep enough in the Darien jungle to be near Colombia.

My writing habits are totally boring. I get up at six-thirty, have a light breakfast, and write for about three hours.

My new novel, By Means of Peace, is about a charismatic politician who is elected President of the United States and eventually becomes ruler of the entire world.

While this concept has been used many times before, I have a few new twists to unfold. I hope to complete the novel about 6-8 months from now.

Currently, my books are available on Amazon and on IngramSpark, but that’s all. This is an area where I’ve failed as a self-published author. I haven’t “built a platform,” as everyone says an indie author must do. I’m currently working on that problem with these promotions.

Don Johnston
In 2045, radio waves surge from the M13 nebula, and President Rex Horn believes they are distress signals. Amid impeachment threats, he funds a project to decipher them. Darien Segura and Carly Hansen believe ESP is the key to decoding the message. While testing for the elusive phenomenon, they locate traces of it in twins, including monkeys, dogs, and people, all born in Alamogordo.
Science Fiction
$0.00
$2.99
Amazon