E. Ryan Janz - A Smoky Noir Filled With Intrigue and Dark Humor
Posted on 24th of May, 2019 by Naomi Bolton 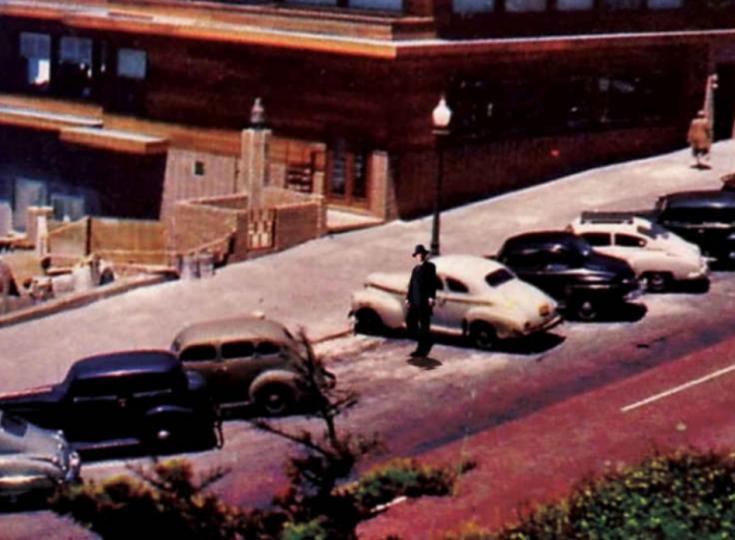 Ryan Janz is a successful author who lives in Anytown, USA, who refuses to display his photo online in the abject fear that he will be recognized and therefore mobbed by crazed fans. Inspired by the great film noirs of the 30's through the 50's, Janz wrote a novel set in 1958 San Francisco, containing as much dark humor as possible while maintaining a noirish feel. As our Author of the Day, he tells us all about Boulevard Dreams.

Please give us a short introduction to what Boulevard Dreams is about.

The book is set in 1958 San Francisco, and concerns an extremely down and out Private Eye, Joe Nails, who experiences recurring dreams of an old school friend he has not seen in years committing suicide. To ease his slight apprehension, he sets out to locate him, yet discovers his friend has disappeared, a full month before his dreams began. He investigates further, only to discover the unimaginable.

What inspired you to create a Noir?

I've loved great film noirs of the 30's through the 50's since I was a kid, especially detective stories, such as The Maltese Falcon, The Big Sleep, Kiss Me Deadly, and Murder My Sweet. But I held no interest in duplicating them or the novels upon which they were based, hoping to inject as much dark humor into the story, the characters, and the dialog as would allow while hopefully still maintaining a noirish feel.

Why 1958 San Francisco. What drew you to this time and place?

It's one of the perfect locations for such a story; foggy, rainy, and romantic, and when set in the distant past it possesses a kind of black and white quality to it, an essential attribute missing if it were set in present day.

Joe Nails endures a series of surrealistic dreams. Why did you use dreams as a catalyst in this story?

I experienced some nondescript dreams of an old school friend of mine, my best friend for many of those years, but who I had not seen for some time. I decided to look him up, starting online by delving into our high school reunion yearbook. Shockingly, I found he died many years before at a fairly young age, thereby inspiring the genesis of this story.

Tell us more about Joe Nails. What makes him tick?

He is decent, and he is honest, but he comes packaged with a painful past, one that unwraps gradually as the story progresses. He also can handle himself in an altercation, although he winds up on the short end more often than not. He was once married, but now lives alone with a cat he adores and he carries a .45 caliber revolver which he has regretfully used before. He is determined by whatever means to discover the fate of his friend, because, quite frankly, that's all he has going for himself.

Assuming it’s too soon to include writing as an actual skill to this point, I will admit to having danced ballet on the legitimate stage, and I’ve covertly gone to the airport numerous times to borrow one of their jets to fly across the sea. Now, I’ve done neither of those things, or really possess any other talents I can think of, so, if I fail as a writer, maybe I could teach a course in it.

You included a lot of humor in unexpected places in Boulevard Dreams. Why did you take this approach?

I cannot think of any situations in our lives where humor is not used, and so it would seem natural in my first novel to inject some of it, irrespective of the overall solemn story it tells, or the sporadic patches of violence inserted, along with it being a noir to boot, just to see if people respond well to it.

Readers say this is a fast-moving book that is hard to put down. How did you pull this off?

What I have heard is one immediately roots for the protagonist in all aspects of his complicated life, including his encounters with a disparate group of people that add humor, suspense, villainy, and violence to the story. I have also been told the dialog is exceptionally realistic, and the overall mystery becomes more convoluted which invites a lot of guessing on the part of the reader, so, I suppose all of these ingredients and a few others make for some easy stretches of reading.

Every character is enjoyable to write for, none challenging, although I will add that writing descriptive prose remains more challenging than anything for me. I'm terrible at it and should be threatened by terrorists not to do it.

Avoid marriage at a young age (I regretfully married younger than 90), learn to cook, and it wouldn't hurt to learn how to write as well.

Which novelists do you admire?

Mark Twain, F Scott Fitzgerald, Robert Lewis Stevenson, among others, such as Truman Capote, particularly his short stories and novellas. A Christmas Memory, for example, is a thing of flawless beauty.

I like to rise early, say around 5:00am, go to the bathroom and then it's back to bed since it’s still dark outside. Then, oh, around eight to sixteen hours later I’ll rise again, but this time I make certain I drink a cup of coffee or two before returning to bed. Inexplicably, I just can’t seem to find the time to write.

A novel set in the mid-70's about a young man venturing to Hollywood to become a screenwriter, but who gets mixed up in the wrong circumstances and the wrong crowd. I hope to have it ready by the fall, but if you’re aware of my writing routine you’ll realize how ludicrous that aspiration is.

I have only the one book available on Amazon right now: be sure to grab Boulevard Dreams  for free for a limited time before it goes back up to it's regular price of $5.99.

Readers are also welcome to contact me on my Facebook page, or at my e-mail address, [email protected], with any questions or feedback (good or bad) they may have. I won’t answer any of them of course, I mean, I’ll be sleeping, but they are certainly welcome to unendingly waste their time trying. I know the feeling.