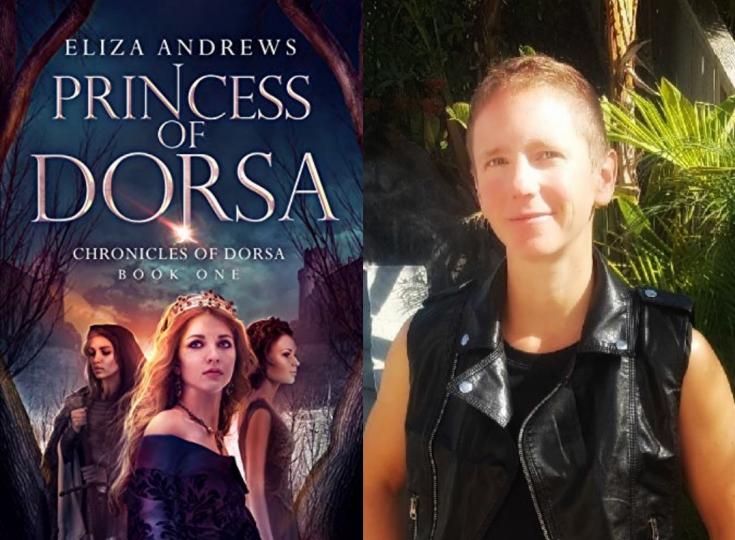 When I started thinking of a new pen name to write fiction featuring lesbian protagonists, I commandeered the name of an ancestor. Eliza Frances Andrews was a southern belle who lived through the Civil War as the privileged daughter of a prominent plantation owner. She became a relatively well-known novelist, essayist, and -- get this -- botanist. Borrowing her name is somewhat tongue-in-cheek; Eliza was a hard-core racist and I can only imagine what she would have to say about LGBTQ people. This is my reimagining of Eliza, therefore -- an Eliza 2.0, a GenX / Millenial version who grew up after women's lib and the Civil Rights movement and Stonewall. Perhaps a 21st-century Eliza would grin at me and say, "Right on." Perhaps the 19th-century Eliza is rolling over in her grave -- if she is, call it karmic justice. As our Author of the Day, Eliza tells us all about her book, Princess of Dorsa.

Please give us a short introduction to what Princess of Dorsa is about.

Princess of Dorsa is an epic fantasy novel centered around Princess Natasia of the House of Dorsa. Tasia is nineteen as the book opens -- she's headstrong, spoiled, and hopelessly in love with someone she cannot be in love with. Her father, the Emperor, is desperate to marry Tasia off to a young man that he can shape into an heir to the crown, but Tasia resists him at every turn.

An attempt on Tasia's life changes everything. No longer certain whom he can trust, the Emperor takes the extraordinary step of naming Tasia his successor. Tasia finds she has to grow up fast if she is to rise to the task of being the next ruler of the Empire, but political intrigue and danger surround her on every side. She finds an unlikely ally in Joslyn, a decorated soldier appointed by Tasia's father to be her personal guard. The rest of the story unfolds from there...

Why do you write fantasy with an LGBTQ twist? What drew you to this genre?

I write fantasy with an LGBTQ twist because I yearned for the kinds of stories I love (fantasy and other forms of speculative fiction) with protagonists who reflect my own life and life experiences. Mainstream media has gotten better at including queer characters, but they still tend to be side characters. I wanted stories with LGBTQ main characters, and since I couldn't find the stories I wanted with the characters I wanted, I wrote it myself.

Yes, it can be read as a standalone, but it wouldn't be very satisfying that way! There are three books in this series -- Princess of Dorsa, Soldier of Dorsa, and the forthcoming Empress of Dorsa.

Readers have compared your books with Game of Thrones. Which fantasy authors inspire you?

Game of Thrones is a direct influence on this series. While binge-watching the show (I'd already read the books) in 2018, my girlfriend and I began complaining about the absence of LGBTQ characters with happy endings. Now granted, very few characters in Game of Thrones get happy ending, LGBTQ or not! Nevertheless, she and I both craved a "Game of Thrones with lesbians," and she convinced me to write it.

I work a regular job, so I write from 6am to 7am Monday through Friday, along with a few hours on the weekend. I also meet with a group of other lesfic writers at 6am Mondays and Wednesdays. We chat for a few minutes, then write for a half an hour before debriefing and saying our goodbyes.

I just finished a short post-apocalyptic novel called Bigger Monsters (https://authorelizaandrews.com/bigger-monsters). It's not a traditional zombie novel; it's a dark comedy without a lot of zombie gore. I like to think that it is a zombie tale for people who don't usually like zombie tales. It will be out early February.

The best place to find me is my website: https://authorelizaandrews.com/