Ellie Alexander - Delicious Bakeshop Mysteries
Posted on 8th of May, 2020 by Naomi Bolton 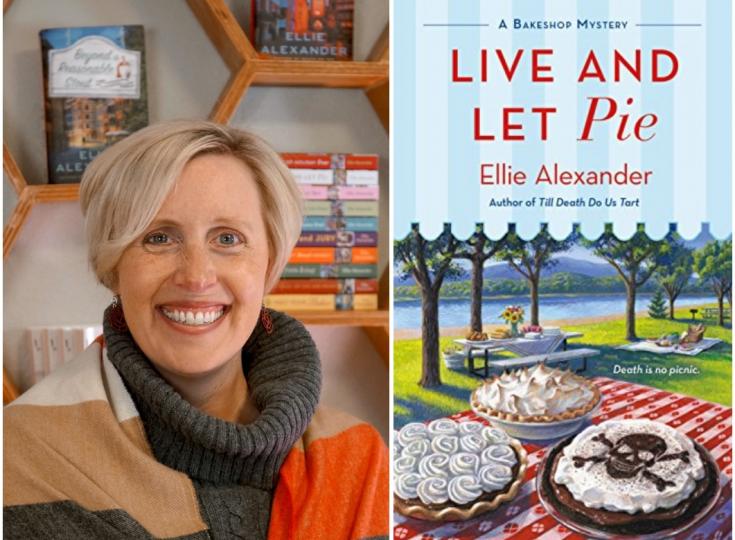 Ellie Alexander, author of the Bakeshop Mysteries & Sloan Krause Mysteries, is a Pacific Northwest native who spends ample time testing pastry recipes in her kitchen or sampling drinks at nearby coffeehouses & breweries all in the name of research. As our Author of the Day, she tells us about her book, Live and Let Pie.

Please give us a short introduction to what Live and Let Pie is about.

Live and Let Pie is the 9th book in my Bakeshop Mystery series. The series is set in the charming hamlet of Ashland, Oregon and features a romantic pastry chef, Juliet (Jules) who has returned home to Ashland to heal her broken heart and run her family bakeshop, Torte. In this book, Juliet is at Emigrant Lake for a lovely summer walk. Two young girls who had been playing in the lake’s shallow waters surface, screaming. They’ve found a skull, which turns out to be from an unsolved murder many years earlier. The inspiration for Live and Let Pie came about when I was at Emigrant Lake a few summers ago. There was a drought and the lake levels were so low that an old town that had been flooded by the addition of a dam, was revealed. It was so creepy to think about an entire town being submerged under the lake that I knew that had to be part of the story.

What inspired you to write about a pastry chef who gets caught up in a murder mystery?

Baking has always been a love language for me. I grew up baking in the kitchen with my mom, who also introduced me to mysteries. She had me reading Nancy Drew and Agatha Christie at a young age. I think that baking naturally brings people together. The kitchen is always the gathering place and center of the house. Torte, my fictional bakeshop, fills that role for the community. Everyone comes to get a pistachio orange latte and cardamom sweet bun and then stays to dish on the local gossip. As a writer it’s a great way to have a constant rotation of suspects coming in and out of the bakeshop’s front doors.

Tell us more about Jules. What makes her tick?

Jules grew up in Ashland, Oregon home of the world-famous Oregon Shakespeare Festival. She’s always been a romantic at heart and blames it on her name—Juliet. She left Ashland in search of adventures and pastry after high school and has spent the last decade working as a pastry chef for a boutique cruise line. She’s sailed the world, and now is returning home. That search for home is part of her struggle and inner journey. I like exploring that theme. Can you come home again? If you’ve changed is home the same? And, can we ever really go home again?

Apart from facing a mystery, Jules also has unresolved matters in her own marriage. Why did you take this approach?

Yes, in the first book in the series we learn that Jules has left her husband, Carlos on the ship. We don’t initially know why she’s left him, just that she’s returning home to help run her family’s artisan bakeshop. Because she’s a romantic and that her bigger arch is about this search from home I wanted her to feel torn between two worlds. She’s been sailing from port to port and now she’s finding her roots on land. It makes for an interesting dynamic to have her pulled between her love for her estranged husband and her new-found love for Ashland.

I love to bake and I’m a prolific home baker. All of the books in the series include original recipes. However, unlike Juliet, I’m NOT a trained professional pastry chef. My cakes and pies might taste delicious, but they tend to end up lopsided. And, don’t even get me started on my lack of piping skills.

I’m also proficient in sign language which means that I can speak in secret code with anyone else who knows American Sign Language. I haven’t worked that into a book yet, but stay tuned.

Live and let Pie is part of a series. Can it be read as a standalone? How do the other books in the series tie in with this one?

Yes. Every book in the series is a standalone in terms of the actual murder in each book. It can definitely be read as a standalone. I include brief details about Juliet’s past and her relationships with the rest of the cast of characters so that new readers to the series aren’t lost. Since this is a long-running series, however, the books do build on each other. Juliet and her team at Torte all grow and change over the course of the series, so readers can certainly start from the beginning if they’re interested in following along with that evolution.

Lance is probably my favorite character to write. He’s the artistic director at the Oregon Shakespeare Festival and Juliet’s best friend. Since he has a flair for the dramatic his voice is very distinct. I don’t have to spend a lot of time trying to get in his head when I sit down to work on a new manuscript. I know exactly what he’ll say, something like, “Darling, absolutely love the outfit today.”

I mean, when a reader picks up a book titled Live and Let Pie, they likely know that they’re reading something lighter in tone than say War and Peace. Cozy mysteries are meant to be escapes. The goal is to take a reader on a quest to piece all of the clues together and figure out whodunit. In that way, I think the genre tends to be more cerebral than it sometimes gets credit for. The reader has the same chance as the sleuth to catch the killer if they don’t get led astray by too many red herrings. However, even though the series is light and cozy, I make a commitment to bring depth to the characters. I want readers to feel connected to Jules and the rest of the cast. She’s gone through a number of losses and her grief helps define her. Her finding home is really about finding connections. Making connections and expanding her idea of home and family.

“You cannot step twice into the same rivers for fresh waters are forever flowing in upon you.” ~Heraclitus

I love this quote because it speaks to the idea that we are always changing and flowing. 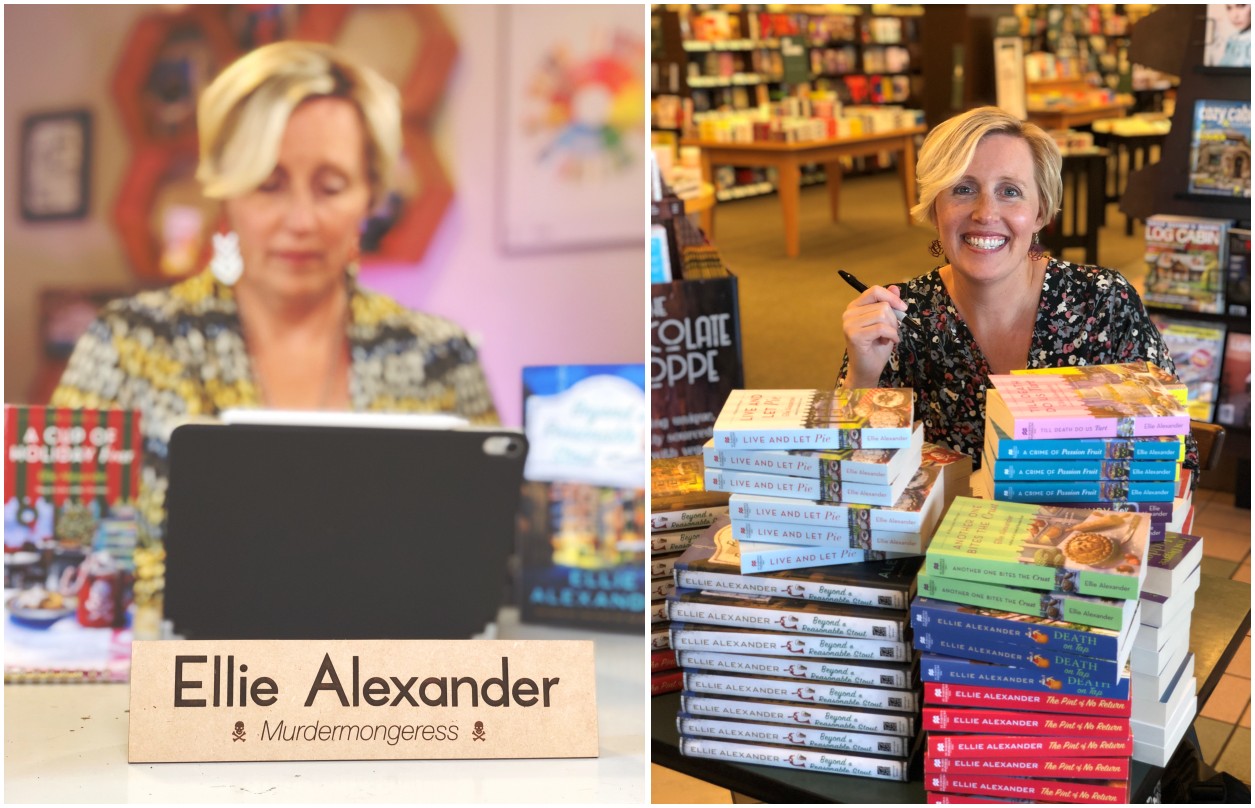 Absolutely. Writing is a job, just like any other profession and I treat it as such. I actually think it’s important to kill the belief that writing is somehow magical or happens outside of ourselves. Yes, as writers we certainly tap into our creative energy, but it’s work. I write at least 2,000 words every day when I’m working on a new book. I go for a long walk in the morning and then I start writing by about 8:30 or 9:00 and I don’t leave my office until I hit my word count. Some days that might take me a couple hours and some days it might take longer. I tend to write very first (and not amazing) first drafts, and then I let them sit for a few months to get some distance before I begin the editing process to flesh everything out.

I’m currently working on a couple different things: The 13th book in my Bakeshop Mystery series, which will be out in 2021, as well as a fun project I started with my readers on social media. To help keep spirits up and provide a fun distraction during these difficult times, I'm writing a collaborative Bakeshop Mystery spin-off with my readers. Each week, I give them questions/prompts and they provide ideas. I pick 5 of the entries and then have everyone vote on their favorite for each question. The winning choices make it into the new pages I write each week for our mystery. We spent the first few weeks deciding on the foundational aspects of the mystery such as the title (A BRUNCH WITH DEATH), which of the Bakeshop characters would be the sleuth (Lance), what the murder weapon would be (poison), where the act would take place (the Merry Windsor Inn), etc., and we're now moving into the seventh week of new pages. We even have a cover for the spin-off! It has generated a lot of participation and been such a fun time for everyone, myself included. We're not even done with this one and readers are already asking for this to be a regular thing. I plan to release this collaborative spin-off as a free e-book companion to the official Bakeshop Mystery series.

I love connecting with readers online. Here are some places you can find me!