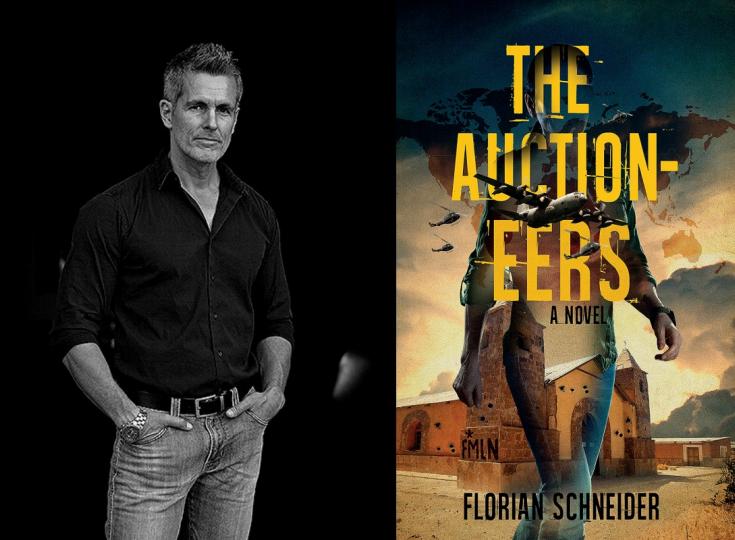 Born and raised in Germany, Florian Schneider is a former small-time photo journalist turned marginally less small-time advertising photographer. He lives in Southern California with his incredibly impressive Mexican-American wife. As our Author of the Day, he tells us all about his book, The Auctioneers.

Please give us a short introduction to what The Auctioneers is about.

The Auctioneers describes the story of Anabel Medina, an El Salvadoran immigrant and L.A. resident, who, after having stopped a madman on a shooting spree in Malibu, rises to become a brilliant (if reluctant) voice for peace and social equity and ultimately runs for office in the country she has come to love, but for whose soul she fears.

What inspired this story? Was there something in particular that made you want to tackle this?

I am an immigrant from Germany who moved to California more than twenty years ago—mostly for rather superficial reasons, like the “glamorous” lifestyle of the Golden State. In the years since then, I have worked as a commercial photographer, creating ads for more or less every major television network and music label, as well as many advertising agencies.

Through my work, I have had the opportunity to visit (so far) roughly half this country’s states, and no matter where I went, I kept meeting the warmest, kindest and most decent people one can ever hope to meet. These countless and magnificent experiences have turned my initial infatuation with Los Angeles into a love for the entire country and its people that is broader than I’d ever thought it’d be.

This love has subsequently led to my growing sense of indignation toward this country’s leaders—elected or not, and no matter which “side” they purport to be on—for I have come to think that they don’t serve the interests of their constituents, but rather the ones of their corporate donors. Anabel Medina’s journey is a fictitious account of my personal “wish fulfillment.” Just imagine if there was a leader who is actually beholden to the people and the truth. A leader who is truly representing her constituents, not those who beckon her with six- or seven-figure speaking fees and seats on boards of major companies.

Tell us more about Anabel Medina. What makes her tick?

Anabel is brilliant, courageous, empathetic, genuinely humble, utterly decent, and completely incorruptible. Attributes, then, of which there is no shortage among people in America—yet attributes whose bearers almost never seem to make it into the halls of power.

What makes Chris Heller so special?

I don’t know about special, but he is, not entirely unlike me, a lonely, depression- and anxiety-ridden cynic who—after meeting an incredibly impressive woman who grew up under less-than-sheltered circumstances south of the American border—gets reacquainted with such long-forgotten sentiments as hope and happiness and, yes, true love.

Why did you pick LA as the backdrop for your story?

Because I’ve lived there for many years and, after having gone to and explored all kinds of neighborhoods of Los Angeles, know it better than any other city.

Aside from being a high school-dropout and former small-time photo journalist who managed to become a marginally less small-time ad photographer, I’d say its empathy (although I’m not sure if one can call that a skill): the ability to walk in someone else’s shoes; to be able to understand what someone from a completely different background than one’s own feels. Which is arguably the single most important quality for a fiction writer—and thus made me dare to think that I might actually be able to become one.

Chris Heller’s grandfather. To get into the why would be a major spoiler, but I think the reasons will be self-evident once readers get to that part of the novel.

Why did you title this book The Auctioneers?

Because it deals with the commodification of absolutely everything.

Does the book contain an underlying message? What do you hope your readers will take away from this?

It’s safe to say the entire book is riddled with underlying messages. It’s unabashedly (geo)political—though absolutely NOT partisan—and my hope is that the reader will come away not with a turnkey ideology, but with an enhanced desire and ability to hone and use their critical thinking skills.

Why did you include a media smear campaign in your story?

Because it mirrors reality. The world (and internet) is teeming with genuinely ludicrous crackpot conspiracy theories, which makes it all that much easier for the Western world’s corporate overlords to conflate actual truth-seekers with the insane tinfoil hat wearers.

My fourth novel, which, like all my novels, deals with complex and meticulously researched geopolitical issues. This one will be about international arms dealing, the legal and the illegal kind, as well as the wide and gray ravine in-between.

I don’t participate in the global social media competition of Who’s-got-the-most-exciting-life. However, should a stray reader actually have a desire to get in touch with me, he or she is welcome to do so through the contact form on my website (www.florianschneiderphoto.com) or through my profile on Goodreads, in which case I would be more than happy to respond.