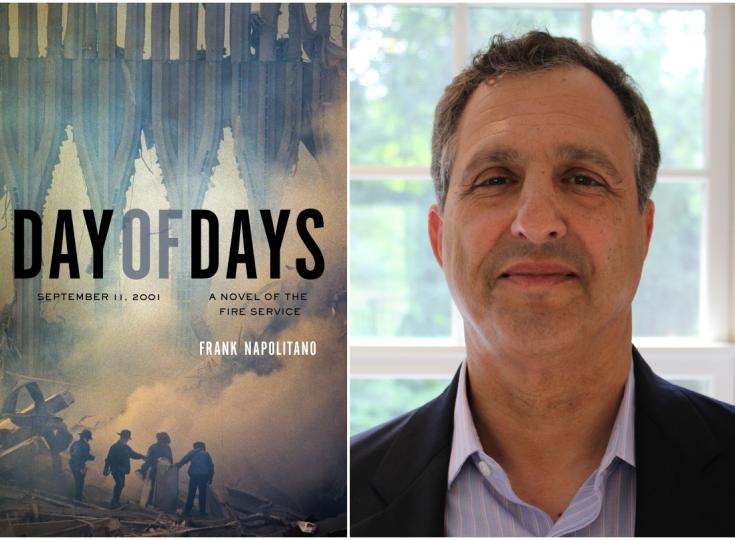 Frank Napolitano is a native/resident of Greenwich, CT. Since 1982, when he was 18, he has been a member of a local volunteer fire company, where he has held the rank of lieutenant and captain. He was in lower Manhattan on September 11, 2001. As our Author of the Day, he tells us all about his book, Day of Days.

Please give us a short introduction to what Day of Days is about.

Through the lives of five fireman, Days of Days gives the reader a look at the fire service, revealing all the challenges, misfortunes, and loves of a profession where failure is sometimes measured in lives and success in sacrifice. When these men find themselves at the World Trade Center on September 11, 2001, it is their commitment to this calling that leads them to achieve acts of extraordinary bravery and unspeakable sacrifice and, in doing so, reveal the true nature of the fire service and those called to serve so other may live.

On September 11, 2001, I was in lower Manhattan and witnessed the terrorist attacks firsthand. I am a volunteer firefighter in a fire company in the suburbs of New York City. That night, when I got back to my firehouse, we began to hear stories about guys we knew in the FDNY and what happened to them that morning. Two weeks later, I was at the World Trade Center with my fire company assisting in the recovery efforts after the attacks and I continued to hear stories of incredible bravery and sacrifice by my fellow firefighters. I expected someone would write a story about what I heard and saw and waited ten years expecting someone to do so. But no one did. So, ten years ago, I started writing this novel that tells the story of what it is to be a firefighter. It reveals the emotional, psychological, and physical price paid in this line of work, and then takes the characters (and the reader) through a minute-by-minute account of what happened that morning at the World Trade Center.

There was a significant amount of research that went into this book. The minute-by-minute account of what the fire service experienced at the World Trade Center that day required me to research what different units and companies were doing in order to give the reader a real sense of the struggle that the fire service was engaged in. I also had to fill in the gaps from my first-hand experience.

How many of your own experiences did you end up writing into this book?

Some of the non- 9 11 fire service experiences in the book come from first-hand experience. I joined the fire department when I was eighteen trying to find out where I fit into the world. The people I met in the fire service, both career, and volunteer, have been the most honest, humble people I have ever met – real salt of the earth. I grew up in the fire service, learning a skill, the importance of service, and found a community that does not judge you other than your performance of your duties.

The elements of the story that convey the experiences a person has when he or she joins the fire service, the training, the live fire experiences, the camaraderie of the brotherhood of firefighters, those elements are based on my experiences or what I’ve witnessed over the years. If the novel weren’t centered on the FDNY and September 11th, its subtitle could have been “Adventures in the Fire Service.” Of course, my experiences on and after September 11, 2001, also gave me first-hand material that made its way into the book.

Why did you decide to publish this now?

The book was published on September 7, 2021, just ahead of the 20th anniversary of the 2001 terrorist attacks on the World Trade Center. It seemed an appropriate time to release the book.

Apart from writing, what other secret skills do you have?

The greatest challenge was deciding whether or not to bring it to publication. I finished writing it in 2018 and then put it away to give myself some time to decide if writing it was an attempt to exorcise my PTSD or if I really wanted to publish it.

In which way has 9-11 most impacted your life?

Those of us who were first-hand witnesses/survivors/responders, etc., to September 11 at the World Trade Center walked through a door very few others have. That experience reaffirmed the reaction I had right after I fought my first fire at 18 years old. Life is so precious that you have to find the beauty in the most mundane, simple, and banal aspects of life, and be thankful for even those experiences. Every day is a gift. That’s what 9 11 taught me.

Also, having been in lower Manhattan that day, witnessing what happened and having assisted in the recovery efforts, so many lost so much, I wanted to do something for our community of survivors and eyewitnesses, and I wouldn’t feel comfortable receiving any personal gain from what happened that day. So 100% of all profits from the sale of the book is being donated to two charities: The Stephen Siller Tunnel to Towers Foundation and the 9 11 Tribute Museum. Both do great work to keep the memory of the sacrifices made that day alive and provide great philanthropy and education in support of 9 11 families and survivors and the surviving family members of first responders and service personnel killed in the line of duty.

What do you hope readers will take away from this?

The themes of service, a commitment to helping others, and the collateral damage, psychologically and emotionally, that accompanies such a commitment, is an important theme in this book. The book helps people understand what it takes to be a firefighter but also reveals what it takes to fight fires, how it is done in a large metropolis – that it’s not just putting “the wet stuff on the red stuff.” The book disabuses readers of any oversimplified notion of firefighting and those who do this work. I would like people to remember that these characters were normal people thrust into extraordinary events and ended up becoming heroes.

Your book tells the story from the viewpoints of several different firefighters. Why was it important to you to focus on individuals?

Firefighters are unique. If you are a firefighter, you can step foot for the first time into any firehouse in this country and be treated as a long-lost brother. It’s a by-product of two elements of the fire service – a) the commitment to assisting perfect strangers when calamity befalls them; and b) the essentiality of teamwork to achieving success. The business is built around multiple individuals executing different tasks in concert for a unified outcome.

In the novel, each main character represents a different function of the fire service: an engineman, a truck company member (“truckie’), a probationary firefighter (rookie, known as a “probie”), an officer, and a chief. Through each character’s role and experience, the reader gets a good sense of how the fire service operates.

After coming home from work and eating dinner, I settle in for a couple of hours of writing. Some days the muse arrives early and the writing flows, other days are not as productive. To get me to keep going, I let a little voice tell me, “you know, I’m not sure you can do this,” and that spurs me to prove myself wrong. Strange habit, but it gets me to finish.

I’m laying out the sequel to tell the story of what happens to the surviving characters of Day of Days. I am also working on a story about a Chinese woman who found herself caught in the middle of momentous events of World War II.