Freddy Cruz - When a DJ Finds Himself in the Center of the Limelight for all the Wrong Reasons
Posted on 23rd of December, 2021 by Naomi Bolton 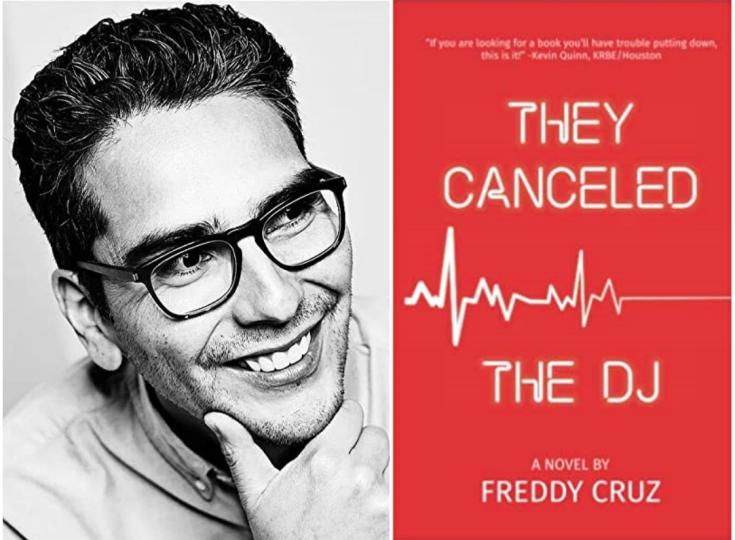 Freddy Cruz is the long-time radio personality of the daytime show on the world-famous KRBE in Houston, TX. He is also an author, philanthropist, lover of new music and old books, and the host of the Book This with Freddy Cruz podcast. Fueled by coffee, laughter, a shared delight in his community, and love for his family, Freddy often marvels at his luck in being able to spend his days filling the buckets of all the things he values most in life. As our Author of the Day, he tells us all about his book, They Canceled the DJ.

Please give us a short introduction to what They Canceled the DJ is about.

They Canceled the DJ follows the story of a hypersensitive radio personality who, on several occasions, finds himself in the center of the limelight for all the wrong reasons. It explores themes of revenge and becoming what you loathe.

I thought it’d be fun to explore a worst-case scenario of what would happen when a disc jockey breaks the unwritten rule of radio: NEVER DATE A LISTENER. And it was! The story is loosely based on actual events. 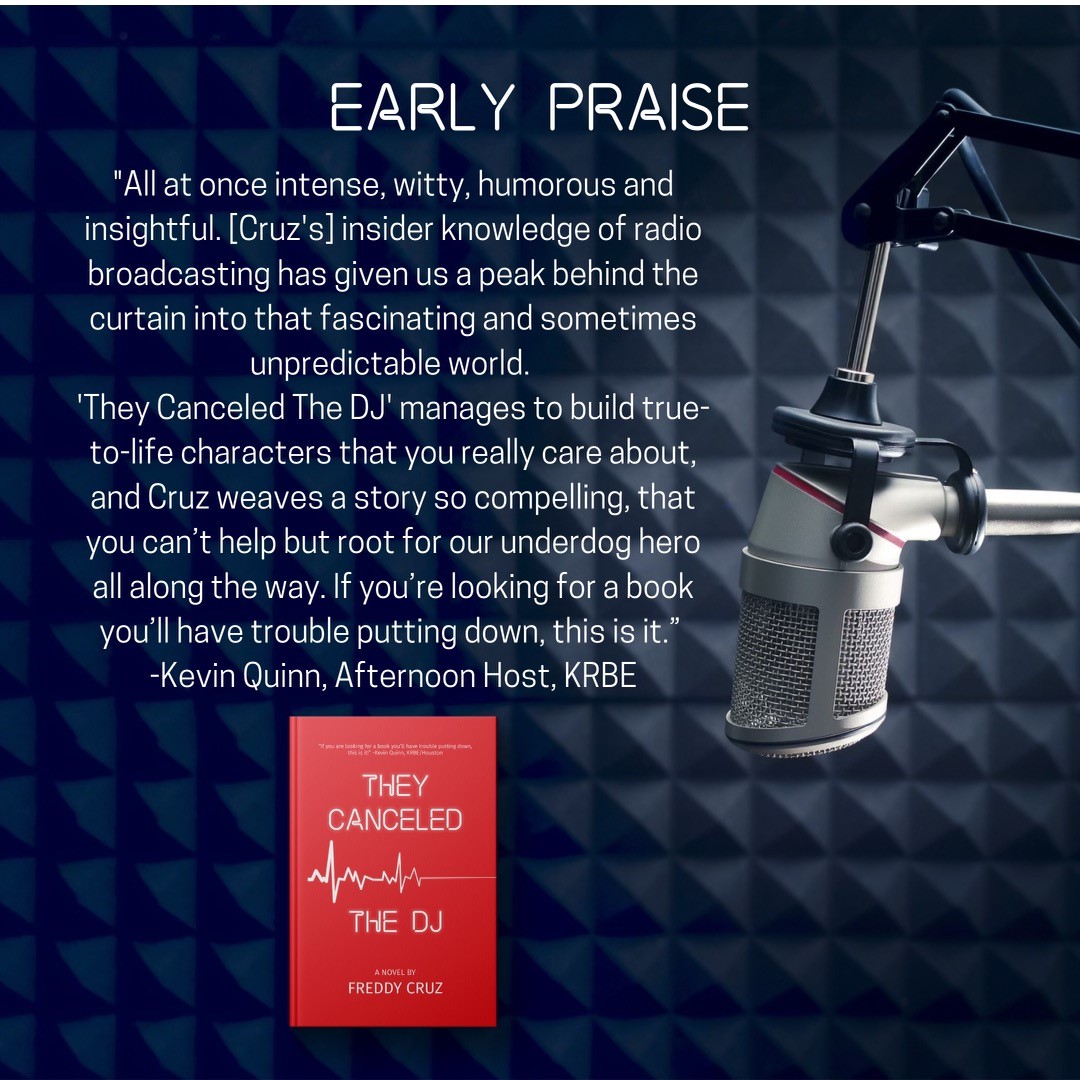 Tell us more about Aubrey Cortes. What makes him tick?

He’s a decent guy, except for the vengeance part. At the core of his persona, he just wants to do his job. But falling for the wrong person at the wrong time put a damper on it.

Why dark comedy? What drew you to the genre?

Humans are complicated people. The vast majority of us are good, but under certain circumstances, can fold and give in to anger and contempt. I originally thought I wrote a satire, but my developmental editor referred to it as a dark comedy, based on certain passages. So it wasn’t the genre I originally intended to write. The plot fell into it.

My radio career spans more than twenty-five years, so one could say that I’ve got the gift of gab. From authors to athletes to listeners and volunteers for charitable organizations, I love interviewing people. Collectively speaking we’re far more interesting than we think. Outside of my work behind the mic and at live events, I’ve made a living writing and producing ten to thirty second copy. It’s fun to be able to work within certain parameters and having them can really harness one’s creativity.

The final chapter was the most challenging part, which was the most fun part. It went through several iterations before getting the proverbial chef’s kiss.

YES. And I love it when that happens. Lyla took me to some crazy places.

You've been working as a DJ for years. How much of your own life experiences have you written into the story?

While this isn’t an autobiography, there are more than a handful of scenes in the book that are inspired by actual events.

Krista Huber with East 26th Publishing gets all the credit for this one. We love the on-air light font, which is obviously a nod to the industry I love. But the volume needle that morphs into a flatline tells people to buckle up for a wild ride.

Revenge is a big theme in this book. Why did you take this approach?

How many times have we been trolled online or harassed or embarrassed in public? Wouldn’t you want to see how far you could carry out a plot for revenge? More than anything, I suppose this could be a cautionary tale. One that reminds us to not become the thing—or in this case, the person/people—we loathe.

What, would you say, makes an antihero so appealing?

Terrible choices make for great stories. Especially when one is caught up in their feelings like AC. Someone who does bad things for reasons they think are good, that’s what makes for an interesting plot. 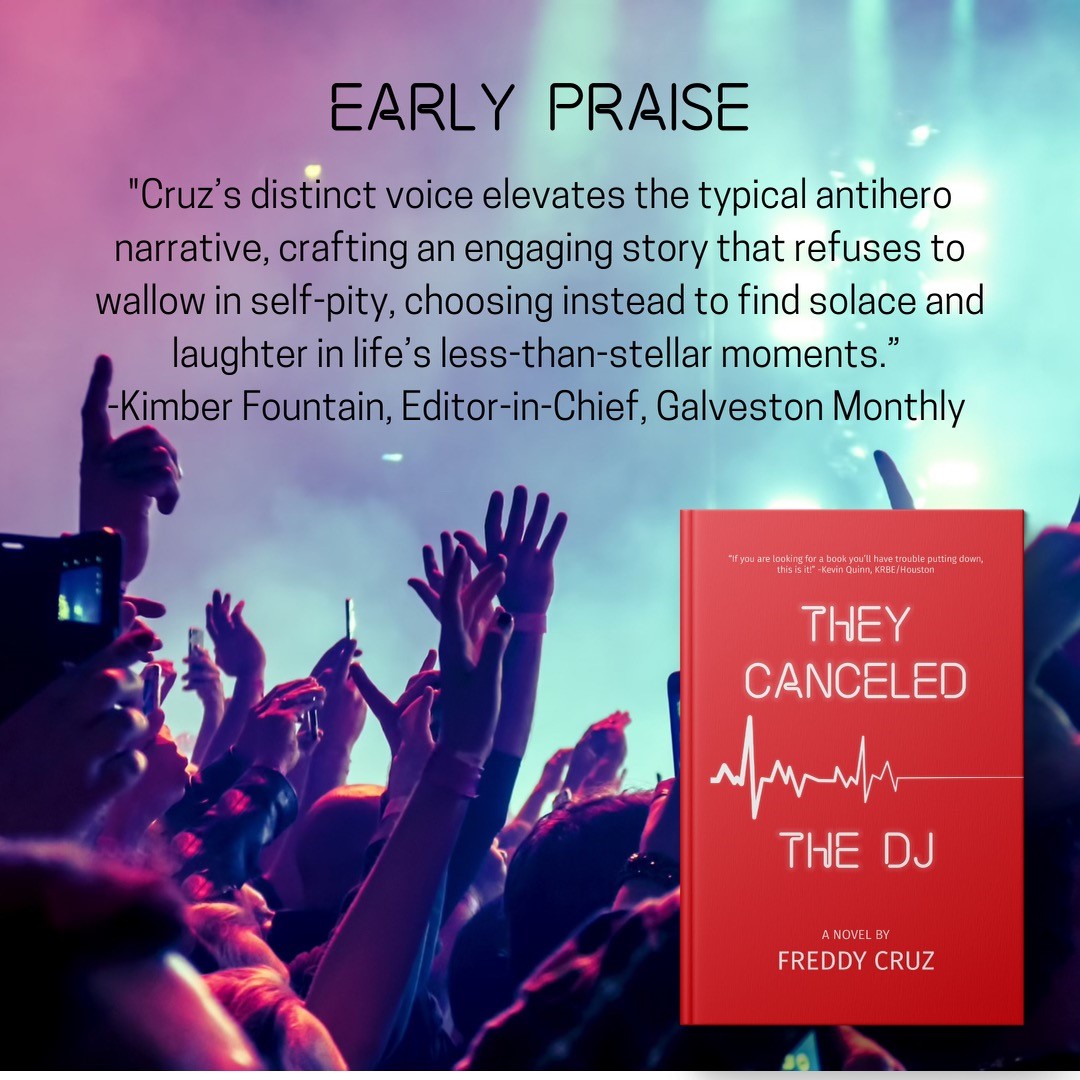 I write about five hundred words a day via show prep and for copywriting. For the novel, I wrote ten pages longhand during the infamous Winter Freeze of 2021, in the dark with nothing but a flashlight.

Working on a psychological thriller set against the backdrop of Christmas time in Houston, Texas. First person present through two different characters.