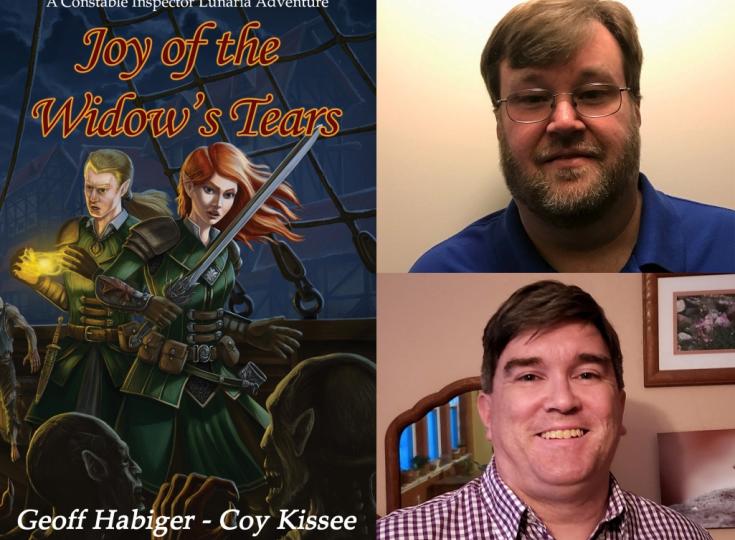 The writing duo of Geoff Habiger and Coy Kissee have been life-long friends since high school in Manhattan, Kansas. (Affectionately known as the Little Apple, which was a much better place to grow up than the Big Apple, in our humble opinion.) They love reading, baseball, cats, role-playing games, comics, and board games (not necessarily in that order, and sometimes the cats can be very trying). They've spent many hours together over the years (and it’s been many years) basically geeking out and talking about their favorite books, authors, and movies, often discussing what they would do differently to fix a story or make a better script. They eventually turned this passion into something more than just talk and now write the stories that they want to read. Coy lives with his wife in Lenexa, Kansas. Geoff lives with his wife and son in Tijeras, New Mexico. As our Authors of the Day, they tell us all about their book, Joy of the Widow's Tears.

Please give us a short introduction to what Joy of the Widow's Tears is about.

Joy of the Widow’s Tears is the second book in our Constable Inspector Lunaria Adventure series. Constable Inspector Reva Lunaria’s life is looking up. She’s managed to put two groups of unruly adventurers in jail when she gets word that her boyfriend, Aavril, has just arrived in port. She is looking forward to a relaxing dinner, a present, and maybe some time getting reacquainted after Aavril’s long absence, but Aavril’s ship has delivered more than just a cargo of spices and exotic merchandise. A new evil begins to take root within the city of Tenyl.

Reva’s romantic evening is spoiled by news of a double murder. It should be a simple case, except that the murder victims have since disappeared. Reva’s investigation barely gets underway before Lord Constable Inspector Betulla contrives a way to get Reva suspended from duty. With Reva temporarily off of the force, the murder investigation is given to Constable Inspector Pflamtael, who is looking to find the fastest, and easiest, resolution to the case, regardless of the facts.

Meanwhile, Seeker Ansee Carya investigates what appears to be a simple missing persons case, until he discovers that all of the missing people – including both of the aforementioned murder victims – have become zombies. Now, Reva, with the aid of a halpbloed cleric of the god of Chaos, must work from outside the constabulary in order to figure out who is creating the undead, and how to stop the creatures before all of Tenyl becomes infected.

What inspired you to write about an undead plague?

We had long ago created the undead creatures that are featured in the book – the Disciples of Dreen – as part of our roleplaying game system. The Disciples are zombie-like in appearance, but they have very unique powers. We wanted to create a challenge for Reva and her team to overcome with a case that also focused on a cult-like follower of an evil god.

Tell us more about Reva Lunaria. What makes her tick?

Reva is essentially a workaholic who puts most, if not all, of her self-worth into her job. Due to that, she takes great pride in doing her job well, and has spent considerable time and effort to try to be the best at it. She holds herself to a standard that is so high that it’s practically impossible for her to attain it herself, but she always holds herself and others to the same high standard. This makes it very hard to be Reva’s partner, boss, friend, relative, or even just an acquaintance, as she does not suffer fools, and she will not hesitate to call someone out for incompetence, no matter how seemingly insignificant the event is. On the other hand, she also respects others who are good at their jobs and take pride in their work. One always knows where one stands with Reva Lunaria.

Why did you title the book "Joy of the Widow's Tears"?

The title of the book is a reference to a necklace that plays an important role in the book. The necklace features the profile of a woman with a single gemstone set as a tear falling from her eye, and is called the Joy of the Widow’s Tears. The necklace is actually an artifact dedicated to the god Dreen, who is known as the god of pain and suffering, and the name is a play on the fact that followers of Dreen see pain as a path to joy and enlightenment.

What makes Reva and Ansee such a great team?

They have compatible skill sets. Reva’s rushes headlong at whatever problem rears its head, while Ansee tries to look at all aspects, analyze the facts, and determine a path forward. They both know that there are times when their own first instincts aren’t the best option in a given situation, so they act as foils to each other, keeping them both in check, and making the team all the better for it.

Why did you decide to use a mysterious magic necklace to drive the plot?

We liked the idea of a cursed item driving the plot, and the necklace was a good fit and not repetitive with a lot of other magical items sometimes used in books. In addition, the necklace allowed us to get interaction between many of the characters.

Readers say that the book is action-packed, with palpable pressure. How did you pull this off?

We always try to get the pacing in our stories just right, in order to build up the tension and get to the climax. Part of our secret (shhh… don’t tell the other writers) is that we picture how our story would be filmed if it was turned into a movie. By understanding the basic action beats that a director might use, we can develop the action sequences that we need to tell the story.

Please give us some "good-to-know" facts about each of you.

Geoff: My home growing up was located beneath the city zoo, so I was often awakened by the sounds of peacocks and roaring lions, while in the middle of Kansas. The woods around my house played a big part in developing my imagination and creativity, which developed further when I was first introduced to Dungeons & Dragons in the fifth grade. All of that contributed to the wild ideas that now seem to only find an outlet when writing.

Coy: My mom worked at the library at Kansas State University, and I grew up an avid reader. My first exposure to fantasy literature was reading The Hobbit by J.R.R. Tolkien, leading inevitably to Dungeons & Dragons, and eventually to the creation of the Ados: Land of Strife campaign setting, which is the backdrop for the Reva novels.

How did you go about co-writing this book?

We’ve developed a good working style that utilizes both of our skill sets. We come up with the story ideas together, hashing out the main parts of the plot and characters. We try to do this in person when we can, but we usually have to rely on video calls to get all the details figured out. Once that is done, Geoff writes the first draft of the story and then hands the book over to Coy. Coy then works his magic, making sure that all of the plot points are hit, the characters stay true to themselves, and that the dialogue is spot on. (Plus, he makes sure all of the spelling errors and grammatical mistakes that Geoff shoved into the manuscript are cleaned up.)

The villain of the book: Erroll Saliceä. Getting a villain right can be tricky, as you want them to have depth and meaning, to have a purpose, and to have a reason for what they do. You don’t want them to come across as a caricature. Understanding who Erroll is and what his motives are were tricky, especially since his motives change throughout the narrative as his character develops. Most importantly, we want to make sure that our bad guy is challenging enough for our main characters to deal with. Nobody wants a pushover.

For us, the first thing we usually do is come up with the basic plot for the story, figure out what characters are going to be involved, and how everything will come together. We may only have something as basic as a story idea – i.e., how would Reva deal with an undead cult? – to start from, and from there we develop the story.

What do you hope readers take away from the novel?

We hope that readers will be able to identify with Reva and/or Ansee, and see how they evolve as both partners and individuals throughout the course of the stories. In this particular novel, there are themes of selfishness and grandeur that lead the characters down paths that they should not be following, and their final destinations have their own ramifications. Actions have consequences.

The third book in our Saul Imbierowicz vampire trilogy will be coming out in May, so we are getting the book out to reviewers ahead of its release, and we just revealed the cover on social media. At the same time, Geoff is hard at work drafting the next Reva adventure, which takes place about a month after the events in Joy of the Widow’s Tears and will shake up things at the Royal Tenyl Constabulary. The title of book three is Fear of the Minister’s Justice, and we hope to have it released in 2022.

The best way to stay up on everything we are doing is to go to our website and sign up for our newsletter. You can also follow us on various social media platforms: