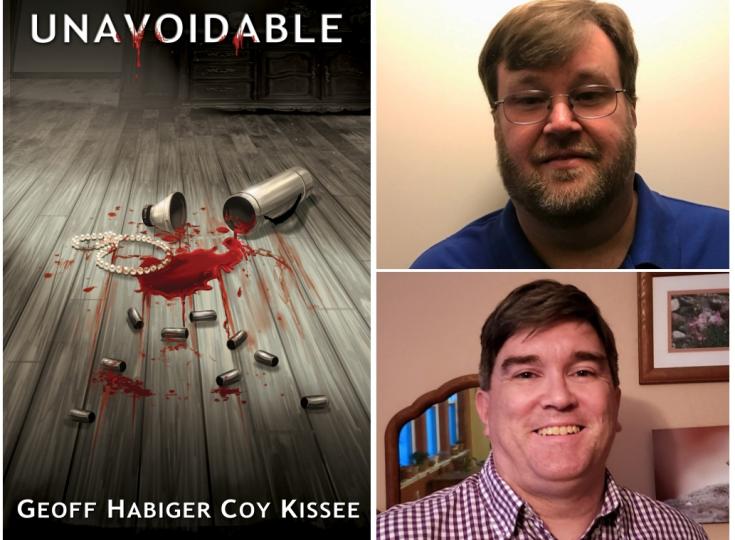 The writing duo of Geoff Habiger and Coy Kissee have been life-long friends since high school in Manhattan, Kansas. (Affectionately known as the Little Apple, which was a much better place to grow up than the Big Apple, in their humble opinion.) They love reading, baseball, cats, role-playing games, comics, and board games (not necessarily in that order, and sometimes the cats can be very trying). They’ve spent many hours together over the years (and it’s been many years) basically geeking out and talking about their favorite books, authors, and movies, often discussing what they would do differently to fix a story or make a better script. They eventually turned this passion into something more than just talking and now writing the stories that they want to read. Coy lives with his wife in Lenexa, Kansas. Geoff lives with his wife and son in Tijeras, New Mexico. As our Authors of the Day, they tell us all about their book, Unavoidable.

Please give us a short introduction to what Unavoidable is about.

Unavoidable is the final book in our first vampire/gangster trilogy. It concludes the storyline of our main character, Saul Imbierowicz. The prior stories have taken Saul from being first unaware that vampires exist (in book 1, Unremarkable), to becoming a vampire himself and trying to take down Al Capone (in book 2, Untouchable). In Unavoidable, Saul is still learning about his powers as Capone is released from prison. The possibility of a vampire war in Chicago (which was explored in Untouchable) becomes a reality as Saul encounters the other vampire master, and Saul is in for a big surprise there! While Saul struggles with his powers and a new vampire threat, he and his partner, Agent Christian Wright, are pulled off the Capone case by FBI Director J. Edgar Hoover. Saul and Christian can’t let the growing threat to Chicago go unheeded, and when Saul’s family is placed in the line of fire, Saul makes a fateful decision to save them, even if it comes at a price that Saul may not be able to pay.

What inspired you to mix the prohibition era with vampires?

We always wanted to tell a vampire story, but vampire stories seem to be done to death (pun intended), and we wanted to do something that would stand out from a crowded field. The idea of vampires and gangsters, especially from the Prohibition era, seemed like a natural fit, as the violence of the gangsters would be an ideal cover for vampires to be able to hide in plain sight.

Tell us more about Saul. What makes him tick?

We wrote Saul with the intention of him being the everyman, so that the reader could identify with him. He’s not special, he’s not a prince from a far off land, he’s not the chosen one who will fulfill the prophecy. He’s just a guy who works at the post office, trying to make a living for himself and getting out from under the shadow of his parents. But his motivations are pretty simple: family first. Sure, he has some unwarranted bravado and undeserved self-confidence, but underneath it all, Saul is a good person who wants to do the right thing and protect those he loves.

You co-wrote this book. How did you go about it with Geoff living in New Mexico and Coy in Kansas?

Technology helps as we can communicate directly through texts, messages, shared cloud folders, and video calls. Our usual process is to discuss the plot and characters together and work out a basic outline for the story. Geoff then writes a first draft and then sends it to Coy for all the necessary revisions, changes, and edits. We then work together by video call to reedit the book and polish it before sending it out to beta readers.

How much research did this story require from you to make the history part of it ring true?

We’ve done quite a bit of research for all of the books in the Saul trilogy. Because we are setting the story in a real time and place (1929 to 1930 Chicago) and with real-world characters (Al Capone, Eliot Ness, and J. Edgar Hoover) we really wanted to capture the feel and essence of the setting and time. We did a lot of reading and online research for the era and the people involved, including reading several biographies of Al Capone. This gave us the foundation we needed to be able to tell our story and make it as “accurate” as possible, while still knowing where we could deviate. There are many elements in the trilogy that are real-world events – the St. Valentine’s Day Massacre, Capone’s “red dinner”, Capone’s meeting with gangsters in Atlantic City and his arrest in Philadelphia for gun possession, as well as his release from prison on the gun charge. The nice thing is that while there is a lot known about Capone and the other gangsters, there are still a lot of unknowns that give us the creative freedom to be able to tell our stories.

Why Al Capone? What fascinates you about him?

Capone has been a flamboyant and appealing figure from the beginning. He cultivated his own persona when he was alive, and people were always fascinated with gangsters and other figures of power. He has a sense of power and ownership that makes him an interesting person to write about, which is probably why he is portrayed so often in books, TV, and movies. At the same time, we thought that his power and charisma would lend itself to being retold from a different perspective, that of him being a vampire.

Cool cover - tell us more about how it came about.

Our covers for the trilogy have always taken a “less is more” approach, and we wanted to continue that for Unavoidable. However, in this case, there was not a specific location that we liked, or were able to get permission to use, so we reached out to an artist that we know, Ian Bristow. We gave him the basic idea of what we wanted, and he created a wonderful cover that captured the essence of the scene and matched the feel of the other covers in the series.

Did any of your characters take off on their own tangent, refusing to do what you had planned for them?

Not really. For the most part, we keep our characters in check, and it’s a bit easier when you are writing from the first person POV since you really only have to deal with one character. However, in previous books, we learned things about our characters that we didn’t originally know, like that fact that one of them was a vampire. He sort of just announced it to us one day and we accepted that fact. (It’s not a good idea to disagree with a vampire.)

“That had been a trip to the restroom neither of us wanted to repeat.” Not many books make reference to the call of nature, and the circumstances surrounding the event in question give a little bit of humanity back to Saul and adds some levity to a break in the action. There are some other lines that we actually like better, but they include spoilers, so this one will have to do.

Readers say they flew through the book. How did you manage to keep the pace throughout?

When we write a book we really try to picture it in the same manner as a director might if they were filming a movie. Good movies have good pacing, with a mix of action and slow parts, so blending in the action with the slower parts was important. Also, we like to keep people turning the page, so we often end chapters at a critical point in the story or the scene so that the reader will want to turn the page and read on to find out what happens. That’s a technique that a lot of writers use, and is also used frequently in television with a dramatic point coming right before the commercial break, making you wait (and keep watching) for the reveal/conclusion after the break.

The first thing that we do is decide what the basic plot will be. Where is the story going and who will be involved in telling that story? From there, we can start the writing process, but we like to have a road map to guide us along the way.

You included some Easter Eggs in the story. Tell us more about them.

We love to include Easter Eggs in all of our books. We think it’s a fun way to connect with our readers and give those that know a nod and a wink to show that we know, too. In Unavoidable, we have a couple of Easter Eggs that are related to one of our friends, and a fellow author. We’re going to keep their name a secret for now, since we don’t want to spoil anything, but we will say that we use the title of one of their books as a location name in Unavoidable, and we even placed the author in one of the scenes and gave them a nice, gory death, because what are friends for?

Right now we are working through the edits on our next fantasy detective novel, Fear of the Minister’s Justice. This will be the third book in our Constable Inspector Lunaria Adventures series, and we look forward to having it come out in 2022.

But we are not done telling Saul’s story, either. We have at least two other trilogies featuring Saul, Agent Wright, and several other characters that we will be writing. We plan on taking Saul in some new and dangerous directions with more vampires, but also some voodoo, and a few of the other “classic” monsters from books and cinema.

Readers can interact with us at the following:
Website: https://www.habigerkissee.com/
Facebook Author Page: https://www.facebook.com/HabigerKisseeAuthors/
Twitter: https://twitter.com/TangentGeoff
We also encourage people to sign up for our Newsletter which comes out once a month. There we provide more info about our projects as well as exclusive content not available in other places like short stories and “behind the scenes” material: https://www.habigerkissee.com/contact