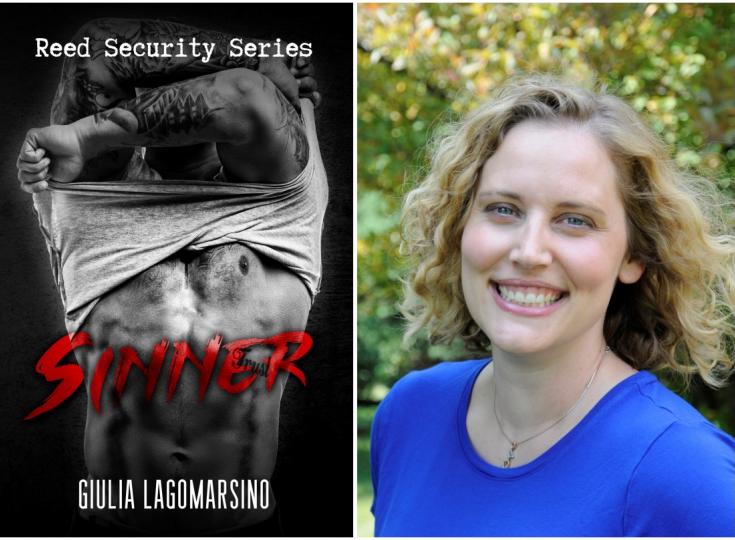 Giulia Lagomarsino started writing in 2017 on a bet from her husband. It was never meant to be more than a test for herself, but it turned into something amazing. Now, she writes pretty much every day, working around her four-year-old twins and her seven-year-old daughter. Lagomarsino and her husband spend many nights planning out murder scenes together and love every minute of it. Those that kill together, stay together! As our Author of the Day, she tells us about her book, Sinner.

Please give us a short introduction to what Sinner is about

Sinner is a story about a woman who suffers from severe anxiety after being taken by a serial killer years ago. Her fear has driven her into hiding, but when she finally decides to venture out, she can't handle being around other people. Sinner is the sexy man that she runs into. His humor helps distract her when she's feeling anxious, and a bond forms between them that neither can deny. He's always been the sinful playboy, but for Cara, he'd give that all up. He sees her strength to fight and push back against things that are spiraling out of control. And she sees past his reputation to the man he really is.

What inspired you to write the Reed Security Series?

Reed Security is a spinoff from Sebastian's book in For The Love Of A Good Woman. Sebastian met Maggie and needed to be protected by Reed Security. However, Reed Security made their first appearance in the second book of that series, Cole. When I developed the characters, I just knew that it would be a great series to write. I was super excited to start writing, but I had to finish off the first series first. But I get like that whenever I think of a new book. 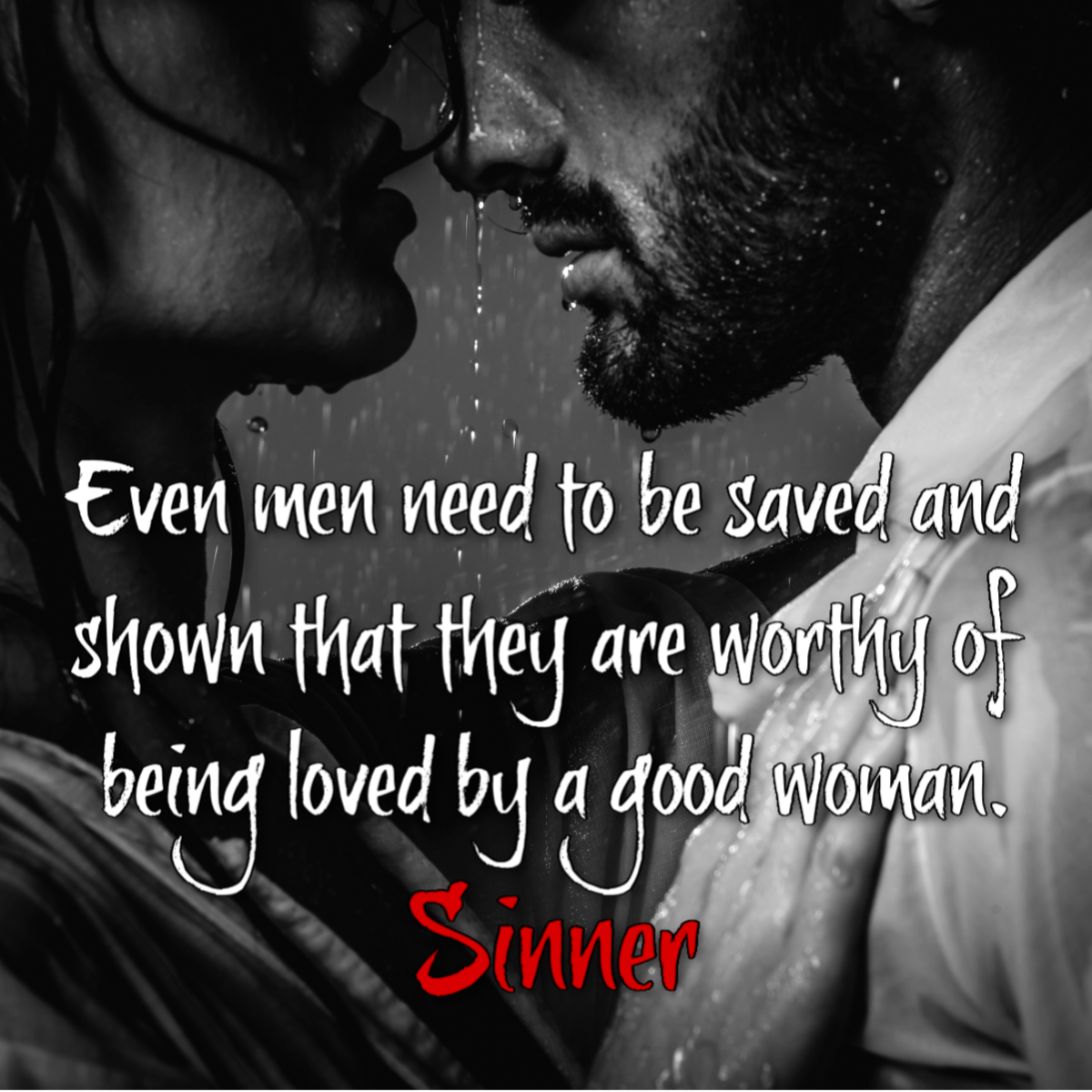 Tell us more about Sinner. What makes him tick?

Sinner is the guy that's always out for a good time. He's a fierce protector when it counts and he has his own demons to battle, but he's also the guy that's always there to lighten the tension. He has this contentious relationship with his boss that's actually a weird kind of bromance, and it only grows as the series does. When he saw Cara for the first time, he knew that she wasn't someone to screw around with, but he couldn't walk away either. What started out as a good time turned into him needing her to breathe. He's the guy that would go to battle for anyone that he cares about, but Cara is different. She's the first woman to really get under his skin. And being fiercely loyal, he risks everything for her.

What makes Cara and Sinner such a great match?

They are both fighters. Even though Cara is screwed up, she's not one to just get all weepy and give in. She'll fight for what she wants. And at one point in the book, it's no longer her who needs to be saved, but him. It puts them on even ground in a way that neither expected. That fighting spirit inside both of them is like a magnetic pull between them, and it doesn't take much for either of them to open up to the other.

Your protagonists have their flaws and readers got really mad at some of the things they did. Why did you create them this way?

People are flawed in general. Everyone makes mistakes, and just because it may not be something you could handle, doesn't mean that someone else won't see the absolute best in them. I like to make all my characters realistically flawed. I like the readers to get mad at the main characters and really draw out these hateful feelings, because that's life. Sometimes you hate the one you're with, but it's the good that conquers and makes you fall in love with that character.

Can Sinner be read as a standalone? How do the other books in the series tie in with this one?

Well, Sinner is the first book, so technically it can be read as a standalone, but Cara first appears in the first series. She doesn't have a large part, but there is some background information there that gives the bigger picture. Many readers have said that my books can be read alone, but I would recommend they be read in order. All of my characters appear throughout the series, and I have two books that are about all the characters. So, if you read in order, you really understand what's going on in everyone's lives.

I'm a mad crocheter! I love yarn so much and crochet whenever I get the chance! My mom taught me when I was younger, but it didn't stick. Then, when I turned 19, I started up again and I just couldn't stop. How much I work on projects comes and goes with how much time I have and if I've found a pattern that I absolutely have to do. Or a special yarn! I love working with baby alpaca!

Well, as an indie writer, I didn't know how much work would be involved in past writing. Even when I'm not writing, I have to constantly check on my social media or my emails. When readers contact me, I want to be there to answer their questions or just chat if that's what they want. They're sharing in this journey with me, and I love that. It's like a giant support system. Any time someone contacts me, good or bad, I feel another spark to continue writing.

I have a wild imagination. I knew that as a kid, but I always thought I was just weird. Now I know that it was meant to be put to use. I think every writer gets inspiration from stories they read or movies they watch. Sometimes it comes from real life. I wrote a book about a woman that finds out she has breast cancer. That story was actually based on a friend. I asked her every question under the sun to get the most realistic story I could. Obviously, the romance part was made up. It's a Reed Security book, so not all the detail are the same, but the heart of the story is from her. Also, sometimes I just lay in bed and imagine a love story. Then things spiral out of control from there. Sometimes that leads to very little sleep. Although, I have to say, most of my storylines come from when I'm writing about a secondary character and something happens to that person, maybe small and insignificant, but all of a sudden, there it is! I flip through my writing journal to a blank page and just start writing out plot lines.

Claire! Oh my gosh. Talk about a character that so many people can connect with. She's the woman with verbal diarrhea that is so awkward around hot men. She's socially awkward in every way. I would imagine that if I walked up to a man with a body like Derek's I would respond much the same way she did. And she gets lost in all these books, playing out these fantasies in her head. It really was so easy to get lost in her character.

On the other hand, Cara, in Sinner's book, was based on me. Aside from the serial killer part. I have social anxiety, so a lot of those feelings and emotions just tumbled out of me. But, like I said, I wasn't ever taken by a serial killer, so there were aspects of her character that I just couldn't relate to.

I think the resounding message in my books is that we're all flawed and screwed up in our own way. All of my characters are so different, and some of them are even people that you might never be friends with, but they are friends with someone out there. There are all kinds of people in the world and I think it's important to represent all of them and let their stories be told.

I use the Scrivener writing program, so it sets a timeline up for me, telling me how many words I need to write for the day. That helps a lot, but I also recently took a break and I'm putting my next book off for another month so that I can catch up and let everything flow more smoothly. Otherwise, I feel like I'm rushing to get everything done by a certain time. This has really been more relaxing for me.

My current book is part of the Reed Security series, but I haven't released who the book is about yet! I only have a few characters left to write about, so I wanted to let my readers play a little guessing game to keep them on their toes! But it's a very fun book with lots of action and comedy.

I am always on Facebook on my author page. https://www.facebook.com/crazybookladylover/ I love to talk to people, so if you contact me through messenger or just on my page, I'm sure to respond as soon as I see the message or post! I'm always open to emails also! On my website, I have the first chapter of all my books, as well as the video that goes along with it! sites.google.com/view/giulialagomarsino/home