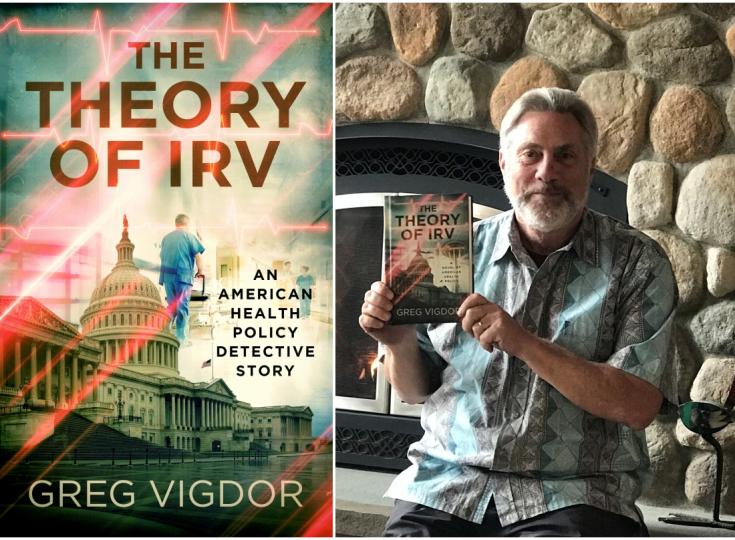 With over 40 years of experience in improving health and health care, Greg Vigdor is uniquely positioned to offer up practical ideas for how America can fix its broken health care system. Greg has served as a CEO, policy expert, advocate, manager and consultant in a variety of health care leadership roles.Now, he is an author,

Please give us a short introduction to what The Theory of Irv is about.

The Theory of Irv is a public health detective story. It begins with the threat of a pandemic and quickly turns into something far more sinister. It is wrapped around an overview of American health policy. An easily digestible historic view of how it got to be so messy and flawed. More importantly, how we might fix it. Our heroes must confront the public threat and the problems of the health care system in resolving the story.

What inspired you to write a public health detective story? What made you want to tackle this?

The core idea was to write a book that could educate about American health policy through entertainment, not dry health policy analysis. Once I reached this design conclusion, the great threats of the public health world became a logical place to draw for danger and suspense that might entertain. Public health is also a historically overlooked part of the health care system, and a problem I wanted to bring out into the open. Strangely enough, beginning the book with a pandemic was something I wrote over 10 years ago, well before current circumstances and based on my professional work that convinced me then that such a threat was not a question of "if" but "when".

You've worked in several health care leadership positions. How has this influenced your writing?

My career passion was to reform the American health care system. I've explored this change in many ways, through many positions, and met many people who shared this passion along the way. Proud as I am of much of what me and my teammates were able to accomplish, the sad truth is that major reform of the American health care system remains an unfulfilled goal. Now that I am semi-retired, this book began as a way for me to purge my feelings about that, but soon became the next front for trying to do something about this.

I've picked up guitar in recent years and would like to believe that some skill is developing there. But more to the point of part of the book, I did discover that I had innate leadership skills over the course of my career, which was a surprise to me at the time. As an introvert, I thought it was something foreign to my being, and then I discovered that is far from the reality of true leadership. Parts of the book explore this notion through one of the central characters.

Why did you title this "The Theory of Irv"?

In my Masters of Health Administration program at the University of Washington in the 1980s, I wrote a paper that suggested that American health policy would be fairer and more productive if we randomly drew lots for access to needed health care services than continue to use existing policy. I dubbed the Theory of this "Infinite Random Variability", and hence, The Theory of Irv. It seemed like just the name for the lead character in the novel, and the name of the book. It is also the name of my grandfather.

Why do you think is the American health care system so rife with politics and divisive ideology?

Its fundamental importance is a natural draw- after all, it is much of the "life" reference in "life, liberty and property". Once government began to assert a role in it, the fire was lit for the political world to attach to its issues. The money around health care grew astronomically, and this poured gas on the fire. Then, it became clear that it was an issue that drew emotion and reaction from people, and the parties and politics began to use the issue, many times for their own ends, not just better health and health care. Here we are.

I hope they learn a bit about health policy, and become more likely to be part of a practical public movement to fix health care, not just use it as a political football. Especially that there is much consensus on what to do to fix health care- just not in the political world which reinforces what divides us. I also hope they learn more about their personal essential role in pursuing their own health.

Some readers say this reads like a "whodunwhat". Was this intentional?

Yes. The entertainment vehicle I chose to share my health care message was that of a mystery that needed to get solved. I thought it needed major suspense and twists and turns to maintain reader interest in the book, as there was 100 years of health policy background to share, much of it complex. It has been gratifying to see reviewers liking the central suspense tale to the novel.

Readers say this is a page-turner. How did you manage to make it fast-paced?

I thought it needed to be fast paced to maintain reader interest. Folding health policy into a novel, even if written tightly, meant that the novel would be long. I decided to intertwine the many pieces of the book, and try to hard to keep it moving through very short chapters. This also required me to sharpen my points and writing. I am learning about writing a book on the fly- this design idea seems to have worked.

How much research did this story require from you? What was the most interesting aspect of this research?

I have over 40 years of experience with the health care aspects of the book, so that dimension only involved reviewing notes and experiences to make sure that I was accurate. I also tried to draw from my personal experiences in settings and such, so that I didn't have to learn entirely new places and problems while learning how to write a novel. All to say that the greatest research for me was on how to write and publish a novel- that was a totally different world to me!

Not really. My research suggested that a regular writing schedule was important. I wrote 3-5 hours a day during the active writing stage, and would write whatever piece of the book captured my fancy on that day. Only later did I start to fold these together more intentionally. I did get the benefit, such as it was and is, of having the shut down of the pandemic to provide me weeks and months to focus on writing! There has to be a better way.

I have begun the research on the sequel to The Theory of Irv. My hope is to write a series of health care detective stories. Subsequent books will be shorter than the current one, but with the same blend of health care mystery mixed with health policy regarding American health care.

A creative home for the book is the Washington Health Foundation, a not for profit that I created and ran for over twenty years. I am now its volunteer President, and proceeds of book sales go to WHF. Parts of the The Theory of Irv involve fictional renderings of some of WHF"s creative leadership work over twenty years. Much of this tale is found on the WHF website.

The Landing Page for the novel is found on the Washington Health Foundation website: www.washhealthfoundation.org/book-the-theory-of-irv.

Also found on this Landing Page is a video on why I wrote the book, a free consumer health tool for readers, and the portal to the overall WHF website, including our health commentaries around current issues. I write monthly blogs on health policy issues and folks can sign up for this email list.