Heidi Catherine & Tamar Sloan - Dystopian Series in a World Isolated by a Rising, Toxic Sea
Posted on 11th of June, 2020 by Naomi Bolton 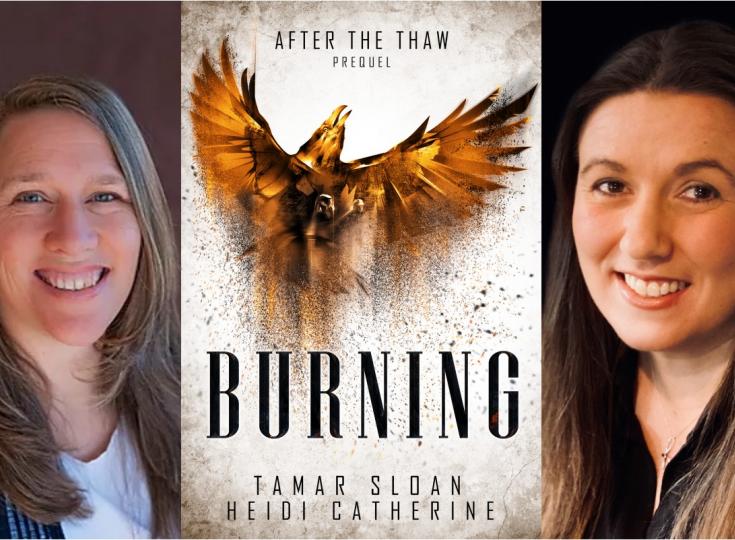 Heidi Catherine is an award-winning fantasy author and hopeless romantic. Her new young adult dystopian series, The Thaw Chronicles, has been co-written with USA Today best-selling author, Tamar Sloan. When not living in her fantasy worlds, Heidi enjoys teaching public relations for an online university. She lives in Melbourne, Australia, with her husband, two sons and two dogs, and believes the truth should never get in the way of a good story.  Tamar Sloan is a USA Today best-selling author of young adult paranormal romance, and also a registered psychologist. Tamar spends her daylight hours loving her job as school psychologist, and on evenings and weekends, her fingers fly over her keyboard.  As our Authors of the Day, they tell us all about Burning, the free prequel to the Thaw Chronicles.

Please give us a short introduction to what Burning is about.

Burning is the free prequel novella to The Thaw Chronicles, a young adult dystopian series that I’m co-writing with USA Today bestselling author, Tamar Sloan. Burning is set in a new world isolated by a rising, toxic sea where teens are required to take part in a Proving to determine if they have the intelligence and heart to champion the future of the broken Earth. Those who succeed become Bound, the ones chosen to breed. Those who fail, are Unbound, releasing them of responsibility but also robbing them of their ability to bear children.

What inspired you to write a story set in a new world isolated by a rising, toxic sea?

Burning is based on the future predicted in Curt Stager’s Deep Future: The next 10,000 years of life on Earth. This book predicts that if we continue on our current trajectory, humans will burn through fossil fuel reserves, releasing 5,000 gigatons of carbon dioxide into the atmosphere. By warming the globe to this extent, we’ll stop the next ice-age in its tracks. Our story world was conceived when we realized the Alaska we know now would become temperate rather than sub-arctic. It was the perfect place to show the drastic changes that could occur. We both loved the idea of rearranging the letters in Alaska, and so Askala was born!

Where did the Bound/Unbound concept come from?

The idea loosely came from the controversial eugenics movement—a not especially nice time in history where selective breeding for positive traits was championed. We were interested in exploring a future society that breeds for both kindness and intelligence to save the planet from human destruction… and whether or not that turns out to be the best answer, or if it all falls apart.

Your book was co-written.  How did you pull this off? How do you decide who writes what?

Each story in the series is told from four alternating points of view, so we write two characters each. We plot the books together and develop a chapter plan. We then use an online document to post up each chapter as we write it. We edit these chapters as we go to make sure we’re both happy with them before we move on. Dozens of messages fly between us every day as we work through various ideas. In this case, two heads are definitely better than one as we’re been able to add so many extra layers to the story given how obsessed we both are with it!?

People compare this series to Divergent, The Hunger Games and The Maze Runner.  Are you fans?

Definitely! In particular, I’m a huge fan of The Hunger Games. I’m very excited to get my hands on a copy of the latest installment very soon. I love the way these books sweep you into another world where so many things are different, yet just as many more are the same.

This is a prequel.  Can it be read as a standalone? How do the other books in the series tie in with this one?

Burning is the story of the generation before the main series takes place. It introduces the story world and helps to explain why the rules of their society exist and why some of the characters carry emotional and physical wounds. It can be read as a standalone however the hope is that you’ll want to read more to see exactly how everything turns out for the next generation!

Tell us more about the brothers Magnus and Callix.  What makes them tick?

Magnus and Callix are brothers in love with the same girl. Callix is the eldest brother and ultimately has to watch Magnus live the life he wanted for himself. The rivalry that exists between them has some pretty explosive consequences that carry over into the remainder of the series.

What makes Amity and Mercy so special?

Amity is faced with the difficult decision of whether she remains loyal to her best friend, Callix, or if she sees where her heart leads her with his brother, Magnus. Mercy, on the other hand, is covering up a huge secret as she fights to be seen by the one person who hasn’t seemed to notice she exists—Callix.

Due to the success of the first series in The Thaw Chronicles, I’m working with Tamar on a spin off series set in the same story world. We love working together and readers are enjoying our books, so we decided to keep going for as long as there’s the demand for our stories. This is also a very difficult world to leave…

I have a website at www.heidicatherine.com with links and blurbs for The Thaw Chronicles, as well as books in my other series. I’m also on Twitter and Instagram, although Facebook is where you’ll find me most often. My author page is www.facebook.com/HeidiCatherineAuthor