Holly Schindler - When Those Who Seemingly Have Everything, Lose All

Holly Schindler - When Those Who Seemingly Have Everything, Lose All
Posted on 30th of June, 2020 by Naomi Bolton 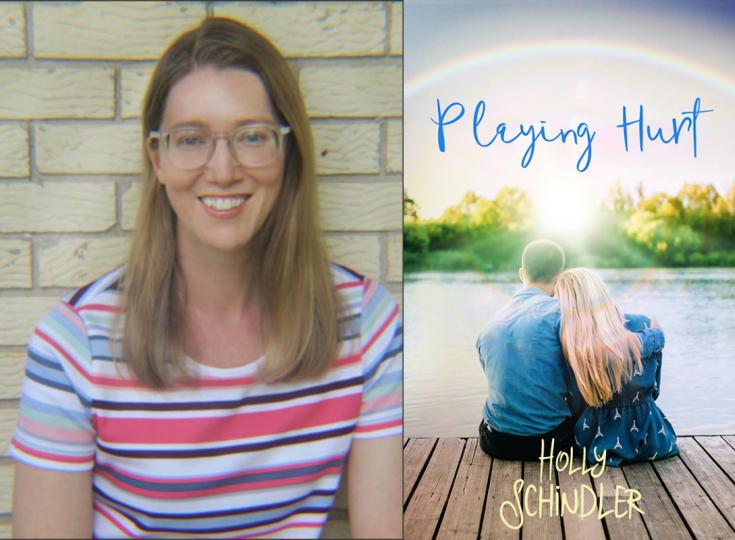 Holly Schindler is a hybrid author of critically acclaimed books for readers of all ages. Her work has received starred reviews in Booklist and Publishers Weekly, and won silver and gold medals in ForeWord Reviews Book of the Year and the IPPY Awards, respectively. Her books have also been featured on Booklist's Best First Novels for Youth and School Library Journal's What's Hot in YA, and been named a PW Pick of the Week. Schindler is currently consuming large quantities of coffee while working on her next novel. As our Author of the Day, she tells us all about her book, Playing Hurt.

Please give us a short introduction to what Playing Hurt is about.

When Chelsea and Clint cross paths one summer at a Minnesota lake resort, the two broken-down athletes are immediately drawn to one another. But wounds of the heart cut the deepest, and take the longest to heal. Will an unexpected romance end up causing Chelsea and Clint more pain—or finally heal their heartbreak?

What inspired you to write about a small-town celebrity whose world changed through an accident?

I’m fascinated by stories of people who seemingly have everything and then lose it all. Every story has to have hardship and struggle, but in stories like Clint’s and Chelsea’s, it can be compounded by the memory of when things were good—as well as a sense of failure. How does a person come back from that?

Tell us more about Chelsea.  What makes her tick?

She’s incredibly competitive. And tough. And smart. She was planning on a college life playing basketball. But an accident and career-ending injury on the court changed all that. When she heads out for a vacation with her family after her high school graduation, she’s trying to figure out what still makes her tick. What she can do with herself now that her passion for basketball has been stripped away. She’s floundering a bit. Until she meets Clint…

Why is Clint such a great match for Chelsea?

He’s also a former athlete. In Clint’s case, his girlfriend died in a car accident on the way to one of his pond hockey tournaments. The tragedy took his head out of the game, and he had to hang up his skates. He gets what it’s like to lose the sport you loved so much. He also knows what it’s like to be afraid—he’s terrified of giving his heart to someone again, and having it end terribly. He really needs Chelsea every bit as much as she needs him. Those are my favorite love stories—the ones in which the characters both change each other for the better.

Professionally, I’ve been both a music and English teacher. Working from home also forces you to wear a hundred hats—as so many of us have recently discovered! So you can also add: dog walker, house painter, plumber, computer tech, floor installer, gardener, cook…I’ve also been working on some digital illustration, to help add a visual component to my independently released books.

I feel like there’s often an it’s never the end theme in a lot of my books. There’s always another chapter up ahead.

That’s tough. Really, I hope there’s something (at least semi-) likable in my villains, and something un-admirable in the heroes of my books. It means I’ve crafted human characters. We’re not perfect. We stumble and we hurt others—even if we don’t mean to—but hopefully, in the end, we learn from that. We grow. We get better.

I always try to deal with issues honestly. Chelsea and Clint have a ton to work through in their own lives—so much they’re still trying to overcome. But another complication is the fact that Chelsea has a boyfriend back home. The thing is, there’s a big difference between caring for or loving someone and being IN love with someone—I wanted to explore that in this book as well. After all, Chelsea and Clint were once sort of in love with basketball and hockey—and their lives. They have to realize that it’s absolutely possible to fall in love again, literally and metaphorically. Is it a perfect journey, with no bumps? No. Do the two characters behave 100% perfectly? No. But I hope I don’t shy away from characters’ imperfect moments. Those are the moments we learn the most, it often seems. A little dash of humor now and then doesn’t hurt, either.

Playing Hurt was actually the second book I released, back in ’11! As it often happens in the publishing world, the rights have reverted back to me. The book originally released as a YA, but for the re-release, I’m also categorizing it as an NA—the characters’ ages (18 and 19) really ride the line between YA and NA, and I am planning a sequel—at that point, the events and characters’ ages will be squarely in the NA category. Those who enjoy a good love story or a story of first love (regardless of the reader’s age) will certainly enjoy Playing Hurt.

I’m a big outliner. I try to consider the outline the first draft. That way, it doesn’t feel like some silly exercise that I need to get through in order to start writing. I give it the attention and detail it deserves. That doesn’t mean I won’t change the outline—as I go along, I’ll change my mind about the events I want to portray. I might even scrap the rest of my outline and re-outline! But it’s so much easier to revamp an outline than it is to rewrite 20K words—which has happened more times than I’d like to admit! The outline can save you a ton of time and effort.

Occasionally. Let’s face it: some days, you just don’t make it. The important part is to look at what you did accomplish, and not beat yourself up about, say, the 500 extra words you didn’t quite get pounded out.

Usually, it’s up early with my dog Gus. I’m also a news junkie, so I start the day with digital papers and, often, a walk. Even though I work from home, I work in spurts—around what needs to be accomplished at the house that day. It just goes to show you that there really is no perfect time to write a book. You’ll never be completely free from distractions. You just have to learn to write where you can, when you can. I’m a full-time author, but to stay on track, I still need to write on my phone, in notebooks, the backseats of cars, etc. Grab moments when they appear!

The final installment of my Ruby’s Place Christmas series. (I so love writing Christmas stories—especially in the heat of summer! Talk about a great escape.)

I’m also delighted to announce I’m working on Play It Again, the sequel to Playing Hurt! Really, the end of Playing Hurt is actually an intermission in Chelsea and Clint’s love story. I hope Play It Again will give readers that satisfying ending a love story can get you to craving.

HollySchindler.com is the easiest place to get in touch, subscribe to newsletters, and find my social media links. I also have buy buttons for all my books. I’ve written in multiple genres for readers of all ages (contemporary, humor, romance, horror, fantasy), etc., so there’s a little something for everyone. I love hearing from readers, so please don’t hesitate to drop a line!