Heather Rigney - Horror and Comedy are Strange, but Loving Bedfellows

Heather Rigney - Horror and Comedy are Strange, but Loving Bedfellows
Posted on 14th of January, 2019 by Naomi Bolton 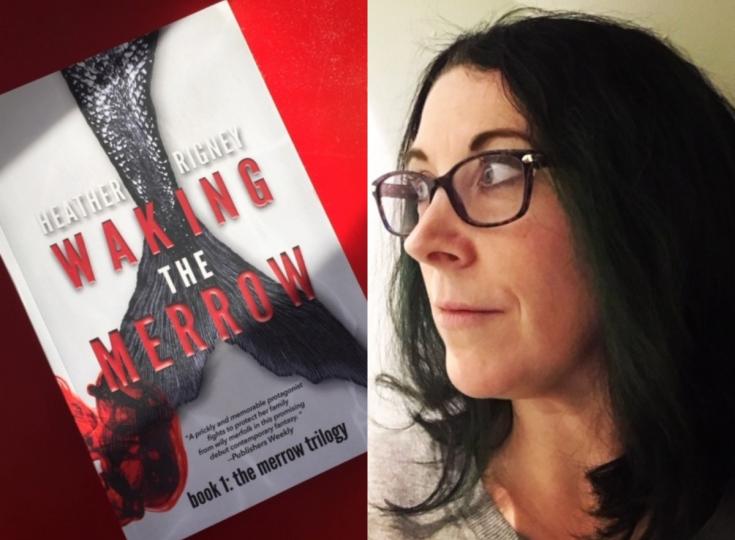 Writer, artist, and underwater fire-breather, Heather Rigney likes to make stuff. Stuff with words, stuff with paint, stuff that's pretty, and stuff that's not. She resides in Pawtuxet Village, Rhode Island with a family that she adores.  As our Author of the Day, she tells us all about her wacky horror-comedy about mermaids, Waking the Merrow.

Waking the Merrow is one flawed woman’s journey to discover what she’s really capable of when pushed. That woman is Evie McFagan, a functioning alcoholic funeral director and sub-par mother. Evie’s shove comes from a homicidal mermaid who lives in the bay near Evie’s home. Since 1625, Nomia, the mermaid, or merrow, hunted the waters of Rhode Island’s Narragansett Bay and her twisted story is steeped in colonial New England history. Evie along with Nomia--in her human guise--collide at a local playground. Nautical mayhem ensues.

The protagonist is an antihero - drunk, overweight and a subpar mother. Why did you create her this way?

Evie, which rhymes with heavy, is truly a hot mess--a blistering stew bubbling over with issues. I adore her. She is me, unchecked. If I let myself go, I would be her. I wouldn’t care about my looks, my child, nor my career, and I would definitely be drunk most of the time. At some point, I learned to be a disciplined grown-up and, for the most part, I keep it together. When I first wrote about Evie, I made her a displaced, new-to-the-area mom trying to navigate a foreign neighborhood with a child. God, she was so boring. I needed to spice her up. My biggest inspiration for Evie was Sookie Stackhouse from the True Blood series, not because of the way she looked but because she was accessible. Sookie, a small town waitress who liked to sunbathe and paint her toenails, could read other people’s minds but she found it to be a nuisance. I loved that about her and I also loved her quirk. If I could take my boring character and give her a few odd character traits, that would add the spice my story lacked. So, I made Evie an alcoholic funeral director with a foul-mouth.

Your book contains an interesting twist on the mermaid legend. How did the idea originate?

When you think about mermaids, you think back to the sirens of old--beautiful creatures who sit on rocks, singing, combing their hair, until they feel like luring sailors to their deaths. Why would these creatures beguile men into a watery grave? Then I thought, everyone’s gotta eat, right?

The idea of a female predator really appealed to me. I ran with it.

For four years, I played bass in a mom band. I’m an art teacher by day and I’ve been a mountain biker for almost twenty years. I also have an uncanny knack of identifying famous voice actors in commercials. 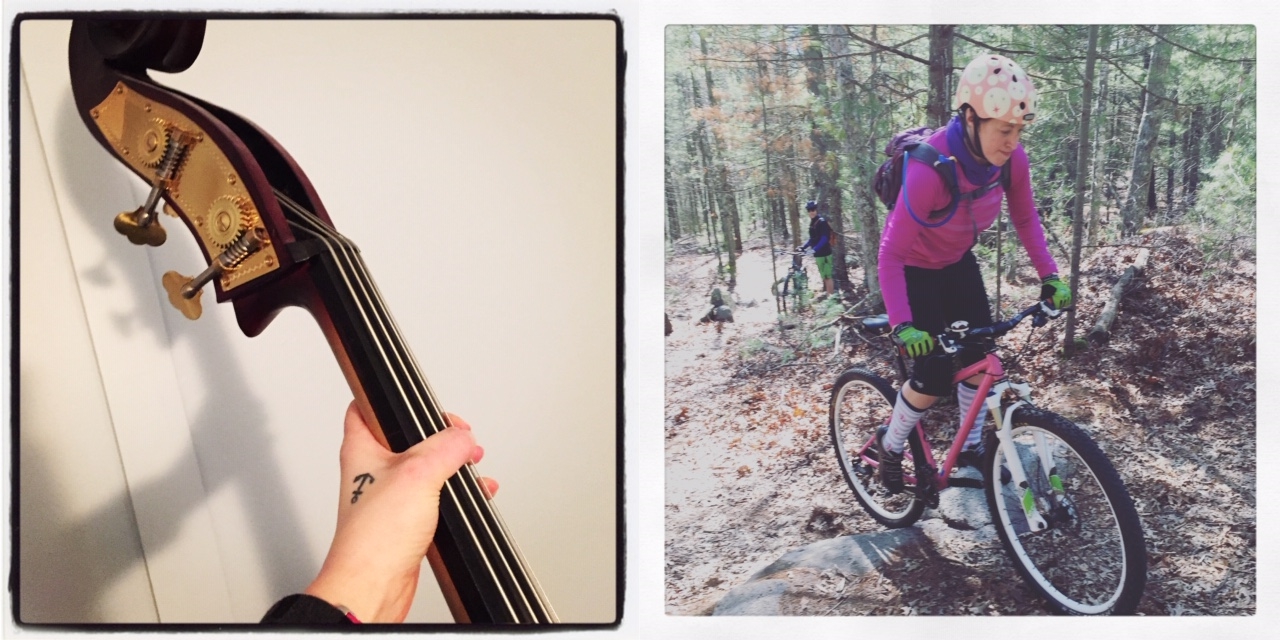 Did you always want to be an author? What prompted you to write your first book?

I always wrote, I just never considered myself a writer. In 2004, I participated in a writing-across-the-curriculum workshop in the junior high where I taught. When I shared my writing with my fellow teachers, no one wanted to read their work after me. The English teachers said, Why aren’t you writing?

At the time, I taught 8th-grade art. I noticed that my male students didn’t carry novels around as the girls did. I asked the boys why this was true and they said there was nothing they wanted to read. When I asked them what they would read, they said they wanted a zombie apocalypse book--one that took place in our junior high.

So, I wrote that book for them. It was just okay. I shopped it around and received some decent feedback from agents, “You’re a good writer. Keep writing. But this is not for us.” I kept writing.

After completing three post-zombie books on homicidal mermaids, I’m glad I didn’t give up.

Readers describe the book as "ugly, gruesome, laugh out loud hilarious and full of action." Is that the experience you were trying to provide when you were writing the book?

I recently read somewhere that horror and comedy are strange, but loving bedfellows and I believe this to be true. In fact, I think you could describe my twenties as ugly, gruesome, laugh out loud hilarious and full of action. When I wrote the books, I wanted the humanity that you witnessed to be grounded in reality. I ask my readers to believe in killer mermaids. If I don’t provide familiar ground to stand on, would you really want to go on that ride with me? That’s how the book became life-like--full of flaws, gruesome, and ridiculous.

Waking the Merrow also contains some flashbacks to little-known events in American History. Why did you include these and how much research did it require from you?

Waking the Merrow is like an homage to my weird little state. Historic Pawtuxet Village, in central Rhode Island, has been my home since 2003. I love the people, the history, the community and our access to Narragansett Bay. I’m proud to be a Villager and a Rhode Islander. We are a tiny, odd state, but we have a lot to offer.
Wanting to add interest to my book, I dug around and found as many historical, nautical accounts as I could, but the main event in my book wasn’t hard to find. Pawtuxet Village is known for the burning of The H.M.S. Gaspee, the alleged spark that started the American Revolution.

Angry colonists tricked a British ship into shallow waters. Grounded, the Gaspee sat for eight hours, waiting for the next high tide. In the meantime, the locals amassed and set fire to the ship. They also shot the Lieutenant in the groin. We celebrate this event, yearly, with a colonial parade, an encampment of reenactors, and then we set fire to a prop ship. It’s ridiculous and yet I love every bit of it.

In Waking, I warped and re-wrote history by giving the angry, bullied colonists a far more sinister stimulant. In my world, a jilted merrow instigated the mob that burned The H.M.S. Gaspee. The commanding officer got himself shot because he tussled with a mermaid, then refused to take her to England.

Did you plan out the plot before you started writing or did most of the events in the book just take place while you were writing?

For the first book, I tried to do an outline but failed miserably. I tried again for the second book and failed again. By the third, I sort of outlined. I kept vigorous notes and lists of things that I wanted to include. For my characters, I made extensive arcs and consulted multiple sources concerning the hero’s journey. Don’t tell anyone, but I tried to make the books follow the Star Wars trilogy. I’m especially proud of the cliff-hanger at the end of book two, Hunting the Merrow.

I saw Empire Strikes Back in the theater when I was almost six-years-old. That screening scarred me. Mom, what will happen to Han Solo? What about Luke’s hand? And, oh my dear stars, Darth Vader is Luke’s father?! Mom! When will we know what happened?! She told me I had to wait two years to find out more. Two years to a six-year-old is a damn eternity. But, to this day, I remember the power of that story and the agony of a cliff hanger. I’ve had readers tell me that they threw book two across the room when they got to the end. I even had one angry reviewer knock me down a star because she didn’t like that the book ended “mid-story.” She was so irritated, she said she might not buy the third book--which came out two years later. Two years, people. Two friggin years. You’re welcome.

Our living situation changed in 2011 and I stopped teaching for six years. I became a stay-at-home mom and a writer. On most days, I got up early and went for a run, then came home, showered, did the morning routine, and then packed up my laptop for the day. After dropping my daughter off at school, I would head to a coffee shop and write from 8:45 AM - 12:30 PM. Sometimes I would write longer, sometimes shorter. I would head home, get housework done--laundry, prepping meals, food shopping, errands, etc. until it was time to get my daughter from school. Occasionally, I would sneak some more writing in after I got my chores done.

I made a schedule for myself. Some days were dedicated to pushing my word count, other days were spent fact-checking, and some days I would split my time between writing and doing social media promotional work. I’m proud to say that I had a pretty disciplined life. 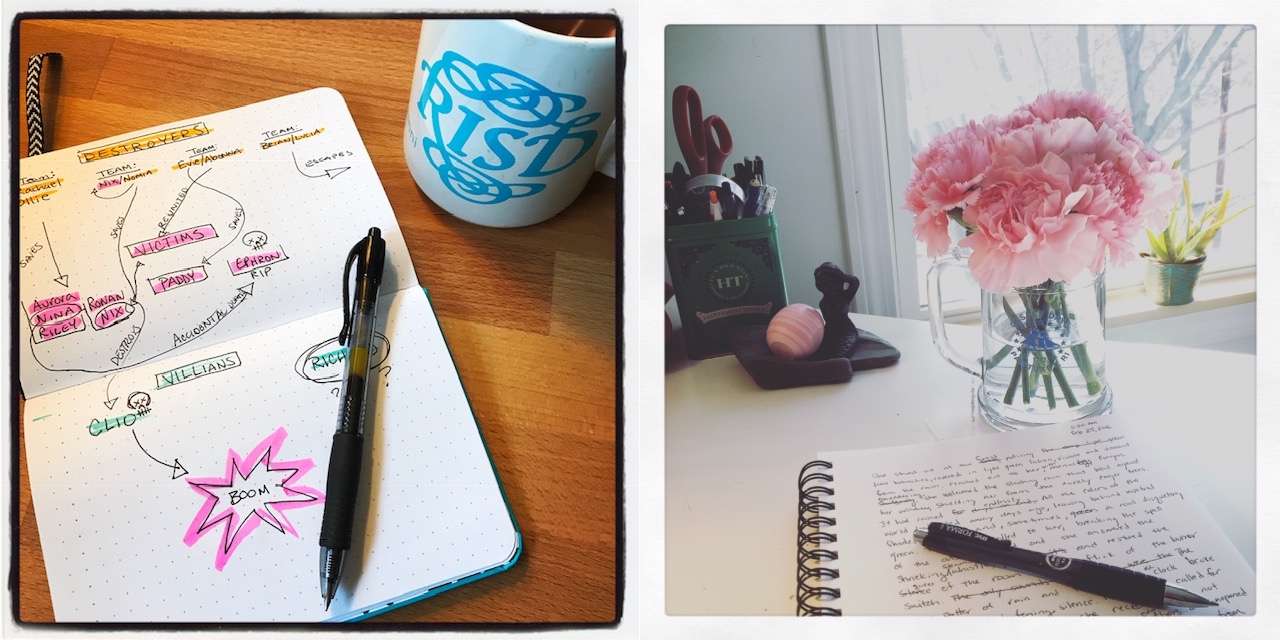 I’m not writing much fiction these days. I work on my lesson plans and write a weekly blog post about writing craft for Inkitt Publishing’s Writer’s Blog. After the trilogy, I felt burned out. But stories still filter through my head. They’re whispering to me as I brush my teeth, while I’m driving, or when I walk alone. There just might be more stories to tell. I don’t think I’m done--not just yet.