Izak Botha - An International Hunt for the Truth About the Church

Izak Botha - An International Hunt for the Truth About the Church
Posted on 27th of February, 2019 by Naomi Bolton 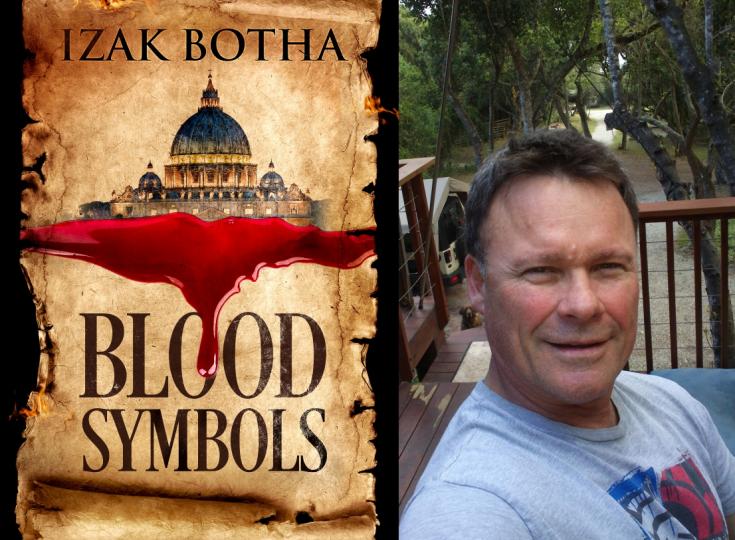 Izak Botha is a perpetual student of life, a former artist, athlete, performer with the Cape Town City Ballet, counselor, architect, entrepreneur, litigator versus multinational corporations, and now author of Homo Angelicansis, Angelicals Reviewed, and Blood Symbols, which made Semi Finalist in Publishers Weekly’s Book Life Prize 2017. As our Author of the Day, Botha tells us all about his book, Blood Symbols.

Please give us a short introduction to what Blood Symbols is about.

Blood Symbols is an original novel around a theme of faith. Jennifer Jaine, a student in religious studies, seeks to resolve her conflict with the Holy Roman Catholic Church. She has become convinced that the church’s authority is based on a lie. Desperate to prove herself wrong, she goes to the Vatican, only to be caught up in an international hunt for the truth about the church, the Pope, and how Jesus intended his followers to live their faith.

Blood Symbols differentiates from other conspiracy novels, which explores the life and spousal relationship of Jesus. Instead Blood Symbols explores the time of the Apostles: did Peter inherit the power and authority of God, did he convert Antiochene gentiles to the Nazarene faith, did his ministry end in Rome, and did he pass the power invested in him to second pope, Linus, effecting the start of apostolic succession?

What inspired you to write about faith and the Catholic church?

The pope of Rome’s legitimacy as God’s custodian of salvation on Earth is founded on the premise of uninterrupted apostolic succession. In its absence the pope is a feeble head of an illegitimate Church. The truth of an all-powerful person such as the Bishop of Rome wielding the power of salvation for all humanity is all-important. But it is also up for scrutiny—hence, Blood Symbols.

Tell us more about Jaine

Jennifer Jaine is an attractive young American who arrives at the Vatican for a meeting with a Cardinal. She hopes to view the oldest copy of the Bible called the Codex Vaticanus. Biblical skepticism and failing faith drives her idealistic quest. Jennifer stumbles upon a huge story, which ultimately could get her killed.

In a way Jennifer is my alter ego. Everything she goes through, I’ve experienced in my life. Many others have had similar experiences. She is therefore someone with whom one can relate. She is gutsy, she is fierce, and she refuses to give in or fail. In the world of mighty men who claim the power of redemption she is a danger to the cause. Nothing will stop her from finding the truth. She could die. But with soul on the line, she’ll take the chance.

How did you manage to describe your scenes in such detail, making readers feel like they are walking the streets of Rome?

My experience with Rome is firsthand. Like most foreigners who have been to Rome, I’ve visited the Vatican. The grandeur of Saint Peter’s Basilica and the Sistine Chapel is immense. Its antique culture and architecture are breathtaking. As a qualified architect, I appreciate it even more. I suppose it comes with the job. Yet, fictionalizing such an iconic landmark is not easy to achieve. That’s because the place is so damn familiar to so many people. Anything less than a perfect rendering puts me at risk of failing people’s expectations. Years of painstaking research, photos from the net, books, journals, and months of zooming in and out of Google Earth to dissect every inch of the terrain finally paid off.

I’m one of those authors who cannot create a scene if it doesn’t exist. Bar a few rooms in the Secrets Archives Libraries which I could not access, I portrayed the scenes as they are in real life. I live them through my characters. Swiss Guard head of security Colonel Schreider at some point turns 360 degrees on his axis, assessing the streets next to the Vatican Palace, before calling for a lockdown of the entire Vatican City. When I read that back I feel like I’m there with him. Other scenes do the same. I love my characters; I’m right there with them when they chase through the Vatican corridors and streets of Rome.

Apart from the architecture already mentioned, I’ve done many things. The least interesting I’d say was corporate. Close on its heels follows my own business, which was outdoor media. Further back, I’ve explored dancing. My friends love introducing me as a ballet dancer. It’s true, I did ballet in my youth. That’s already decades ago. The label stuck though. I’m also an artist; highest scoring art student in the country in my final year at school. Then there was Frisbee. I loved throwing a disk around. Back in the days I incorporated dance with Frisbee freestyle. It enabled me to do things nobody else could. Imagine me split leaping nearly two meters into the air and catching a Frisbee between my legs. That was me. The spinal cord no longer allows for leaps like that. Now fishing with friends and hikes along the coast with my German Shorthaired Pointer is more like it.

Blood Symbols has made Semi Finalist in Publisher's Weekly's Book life Prize. How have readers reacted to the book so far?

Making Semi Finalist is amazing, not because people contact me to congratulate me, but because they reward me with the purchasing copies of my books. The topic of my book is controversial, yet people recognize a genuine attempt at resolving difficult issues regarding faith.

Awards and/or star-studded reviews are immensely important to get. People rely on them for confirmation that the author and his books are legit. Especially if you’re an indie author like me. Reviews and awards from reputable sources make for a large part of an author’s marketing strategy and success. You get taken more seriously with an achievement like that.

The book is very fast-paced. How did you pull this off?

Coming to think of it, I don’t really know. I never aimed to be fast-paced. It just happened. Fast paced does not mean bad writing. It just means there’s a lot happening, and you better keep up. Less description and more dialogue can create pace, but it can also lead to telling rather than showing. I try to maintain a balance. Perhaps I’m scared a slow pace will make the reader fall asleep. That will be the ultimate letdown. I’m writing thrillers after all. Unless you fall asleep from sheer exhaustion. That will make my day.

Blood Symbols does slow down, though. A criticism regarding the factual data was that it at times slowed the pace. Because of the religion aspect, Blood Symbols required factual data to assure credibility. Catholicism and Christianity are difficult to write about, especially if it tends to be controversial.

Another trick to maintain a pace was to regularly change location. Some chapters are also short. Multiple plots running concurrently alongside each other contributed to the perception of pace. At times four plots happen simultaneously. Yep, best you get your thinking caps on, you might need it.

Your book touches on quite a couple of controversies surrounding the Bible. What fascinates you about Biblical controversies?

Contradictions! Contradictions regarding the Bible rife. They’re also the most difficult aspect of Christianity to digest. Many faithful don’t know the history of the Bible. Many clergymen don’t even know its history. Blood Symbols addresses that.

Jennifer starts her journey taking on the contradictions. Her questioning gets her in trouble with those who claim to know the truth. Millenia of deceit is difficult to unravel. Jennifer gives it a go. My task was to get the readers on her side; join her on her quest for answers and justice.

How much research did this book require from you, and what was the most interesting aspect of this research?

I’ve researched all my life. Even while I was studying architecture, I researched religion on the side. I also enjoyed other disciplines such a philosophy and science. Particle physics, cosmology, and evolution grabbed my attention.

The research for Blood Symbols was immense, partly because my non-fiction book about spirituality and the soul which preceded it took up ten ears of my life. On top of that I invested another three years researching the Vatican, its apostolic structures, the history, hierarchy, architecture, and doctrines. The Pope gives a speech, which covers aspects of religion, genetics, philosophy, and science. Oops, I see that look in your eyes. Don’t worry, it only sounds complicated. It’s not a difficult book to read.

Most interesting about the research are the “aha” moment when I stumble upon material confirming a hunch that I’ve had all along. That place when the material you find confirms what you suspected but could not write until proven right. Writing about Christianity keeps me on my toes. Get the facts wrong and your readers will punish you.

Have you always wanted to be a writer? What, would you say, is the most challenging aspect of being an author?

I never thought of becoming a writer until a gypsy told me I’m going to be one. That was ten years before I took up the pen—or typewriter. One could argue she planted the seed and therefore I became a writer. But that’s not so. I was already making notes way before she suggested I’ll write.

The most challenging aspect for me is finding quiet time without some distraction cropping up. I live in a resort where holidaymakers swarm the place during the season. Because many are regulars, an hour walk along the beach can take me two or more hours to complete. Making conversation with them when I already have seventeen characters demanding my attention is trying. It’s like having many friends, all demanding equal time and attention. Eventually it gets to me. My work, or lack of it, suffers when that happens.

My characters appreciate it when I focus again and give them the attention they deserve. Invariably they bring something new to the table when I refocus. Sometimes they come up with stuff that blows my mind. I mentioned this already how I love them—protagonists and antagonists alike.

Currently I’m working on a sequel to Blood Symbols. I cannot say much about it without giving my game away. In the past it’s cost me. The only cat I’ll let out of the bag is that Blood Symbols holds clues towards the end. Yes, you’re going to have to read the book to know what they are. The sequel will make more sense if you’ve read Blood Symbols first. Apart from Jennifer, other characters also make a reappearance. Be on the lookout and hold thumbs that it will be early next year.

The best place to get hold of me is my website. My books also have my e-mail address tugged in there somewhere. The website is set up, so that you fill in the blanks. Feel free to subscribe to my blog. I have a Facebook author page. @izakbothaauthor. Twitter does not grab me. I know it is a useful marketing tool, but as an author I cannot be distracted all the time. I’m also on LinkedIn. I don’t really know why though. If all else fails, Google my name—I should come up first.