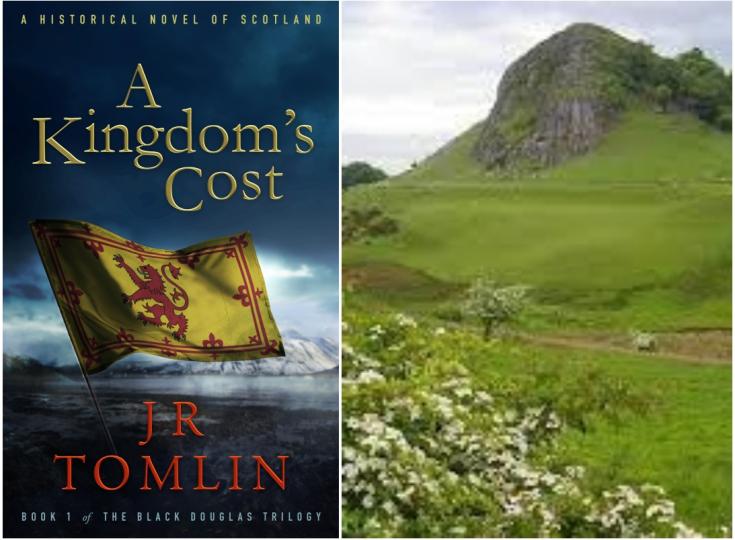 J. R. Tomlin is the author of fourteen historical novels. She has close ties with Scotland as her father was a native Scot, and she spent time in Scotland while growing up. Her historical novels are set for the most part in Scotland. Her love of that nation is traced from the stories of the Bruce her grandmother read to her when she was small, to hillwalking through the Cairngorms where the granite hills have a gorgeous red glow under the setting sun. Later, her writing was influenced by the work of authors such as Alexandre Dumas and Victor Hugo.In addition to spending time in Scotland, she has traveled in the US, Europe and the Pacific Rim. She now lives in Oregon. When JR isn’t writing, she enjoys spending time hiking, playing with her Westie, and killing monsters in computer games. As our Author of the Day, she tells us all about her book, A Kingdom's Cost.

A Kingdom's Cost is basically the story of Scotland's fight for freedom. It is also about why people fight, the very divergent reasons and when a war is or is not justified. In his great 14th century work written about that war only a few decades after it ended, the Scot, John Barbour, wrote this (translated from early Scots):

But he that has been always free Can ne'er know the reality, The anguish and the wretched doom That is a part of thraldom. A thing, when we experience it, Makes evident its opposite. If bondage he has ever known, Then freedom's blessings he will own, And reckon freedom worth in gold More than the world will ever hold!

I once had a reviewer remark in a review of A Kingdom's Cost that of course people of that time knew nothing about freedom. I can't say whether they considered it the same thing that we do, but they certainly valued something that they called freedom.

What inspired you to write about someone who joins Robert the Bruce's fight for freedom?

The main character, like most of the characters in the novel, was a real historical person. His story had not really been told in fiction and I felt it was on that cried for telling. I could always 'hear' James's voice in my head, and experience not unique to me as an author. I suspect most of us can hear our characters' voices.

Tell us more about James Douglas. What makes him tick?

James at the beginning of the novel is a very young nobleman, dispossessed after his father was starved to death in the Tower of London. He has sworn an oath to recover the lands and title that the English stole from him, so at first his motive for war is very personal. But as he experiences the suffering of a conquered land and what that means, the motivations become much more complex and the acts he feels called upon to do might make him wonder if he has become as bad as the conqueror he fights.

A properly written historical novel takes an immense amount of research. I'm not sure who first said that the past is a foreign land, but it is true. There are few assumptions you make that shouldn't be questioned and readers of historical fiction tend to be very knowledgeable. If they aren't many will research themselves to see if what you wrote is true. It is a myriad of things, some large and some small. In medieval Scotland, a woman did not take her husband's surname. Many foods we take for granted, the potato for example, were totally unknown. Ale was relatively weak by our standards. And much of what we think we know is myth and erroneous. People in the middle ages most definitely did bathe, in fact bad smells such as body odor were associated with disease and could make one shunned. People did not throw food on the floor or tear at food like animals because there were strict rules of conduct and ignoring them usually had a social cost. And Scotland was not some barbarian wilderness where combs and armor were unknown as a certain rather well-known movie portrayed it. Nor did medieval Scots wear kilts. But every detail has to be checked and double-checked, preferably in what is considered primary source material, that is material dating from that era.

Why did you title this "A Kingdom's Cost"?

I wanted the title to reflect the theme which is the cost of war and, by implication, what justifies paying such a high cost. And the cost of that war was almost unimaginable.

This is book 1 of a trilogy. Can it be read as a standalone? How do the other books in the series tie in with this one?

It can be read as a standalone although of course, I hope people will want to know what happens to the characters next. The novel only covers the first two years of a war that went on for another two decades.

The story also includes a touch of romance. Why did you take this approach?

The main character was a young man who was likely to have some romantic entanglement because that is part of being human. And part of being in a nation that has been conquered by a foreign power is fear for a loved one who may be in danger when you are away fighting.

Among the wealth of characters in this story, who was the most difficult to create?

I 'created' very few characters from whole cloth. Frankly, it would be hard to create characters more fascinating than James, Lord of Douglas, King Robert the Bruce, and the many people who surrounded them. Some were difficult to write about because their stories were often painful, but people also find happiness in the midst of war and suffering. They, at times, did joy in the companionship of comrades and in love.

I am working on a novel about James Douglas's companion in arms, Sir Thomas Randolph, Earl of Moray. He fought in the same war but had a very different part to play and had in many ways a different experience of the war.

One good place to look for my other novels is my website jttomlin.com.