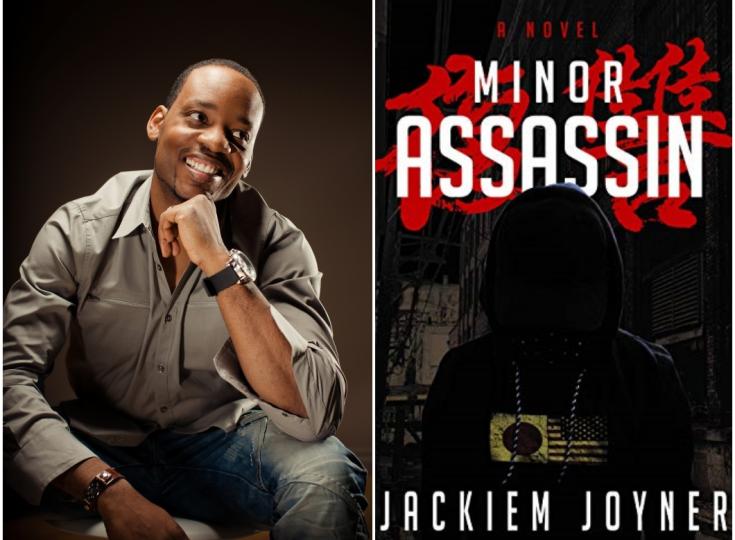 Contemporary saxophonist, author, and music producer Jackiem Joyner is set to release his 7th album, Touch, worldwide this fall, 2019. After more than 12 years as a recording artist, Jackiem continues to stand out with electrifying live performances and brilliant music productions. As a performer, he has toured over 30 countries and performed with the likes of the late George Duke, Marcus Miller, Keiko Matsui, Donnie McClurkin, Angela Bofill, Najee, Kirk Whalum, Peter White, and many, many more. Joyner’s radio success is widely known within the industry. Joyner has two number 1 hit songs, five top 10 billboard singles, and a number one debut album under his belt. In addition, he published the highly-acclaimed science fiction novel Zarya, which received high praise and a five-star rating on Amazon. Minor Assassin is Jackiem’s third novel. As our Author of the Day, he tells us all about this book.

Please give us a short introduction to what Minor Assassin is about.

Minor assassin is a mystery, criminal suspense, and martial arts thriller. Jon, a teen, becomes a highly trained vigilante who takes the law into his own hands to put an end to a brutal human trafficking ring in Las Vegas. He comes from a wealthy African-American family in Henderson, Nevada. Jon's life has been forever altered by tragedy, despite the fact that he is only eight years old. From the safety of the kitchen pantry, he will watch his home being invaded by Japanese gangsters. And his parents' lives were snuffed out right in front of his eyes. And his older sister has been kidnapped. His heart will be consumed by vengeance and rage. A group working to end human trafficking transports him to Japan. He discovers that it is the same organization for which his parents worked. He learns the Japanese way of life and spends five years in an old Japanese village. During those five years, he develops into the most dangerous fighter and killer of his generation. He plans to return to America to exact his vengeance.

What inspired you to write about a boy who gets taken in by mysterious strangers?

I wanted to write a story about how a single dramatic event can change someone's life forever. I wanted to tell a story about stark cultural differences and how they can shape a person's life.

Tell us more about Jon. What makes him tick?

Jon, at eight years old, enjoys toys and video games. He dislikes his older sister receiving more attention from his parents. He goes above and beyond to please both of his parents. He is fascinated by technology and enjoys creating useful household gadgets. Jon, at 13-years-old, is irritated when people refer to him as a child. Especially after everything he's been through. He sees himself as a man trapped in the body of a teen. While he trained to become a skilled fighter, he is unsettled by the prospect of inflicting harm on anyone when he returns to Vegas. Until a Japanese mobster, who teases his age, knocks him to the ground. When rage strikes Jon in an instant, he does not let his enemies live. When he is angry, his focus, strength, and abilities shine.

Family plays an important role in this story. Why did you take this approach?

I like martial arts stories and mysteries. I pondered what would compel a small boy to learn ancient battle techniques. The question is, why would a boy do this instead of playing video games? Jon's love for his family and the tragedy are the only things that could have made him who he is. He was devoted to his family. And Jayla, his sister, might be the only family he has left. And he'll go to any length to find her.

I am best known as a saxophonist, songwriter, and music producer. I've written a few chart-topping songs!

Readers say this book featured almost cinematic level action and adventure. How did you pull this off?

Because I'm a sucker for action sequences! Everything from James Bond to Star Wars to Jet Li and everything in between! In this story, I paid close attention to the fighting scenes. I wanted the reader to feel as though they were a part of it. The agony, the pain, the glory, the quick movements, and the penalties. All of the the above!

I had a lot of fun writing Jon's story as he began a new life in Japan. The cultural shock and the sense of being alone and feeling out of place. Being brown, to be frank. People are staring at him as if he were a strange kid. And him overcoming the numerous difficulties of living in a village without electricity. His only solace came from clinging to the last 20 dollar bill that his father had given him. Later, in Vegas, he would leave a $20 bill near the heads of his victims!

Jayla was by far the most difficult character to write. Being the older sibling in captivity is difficult. Her story is mesmerizing. She is currently residing in Las Vegas, awaiting the age at which she can be sold. She has no idea where her younger brother is. Only that he was never discovered. For the sake of her own survival, she's clinging to the hope that someone can save her.

Do you plan out everything before you start writing, or do parts of the plot just "happen" along the way?

To be honest, a lot of this happens along the way. However, I do create brief outlines to help me stay on track with the story's direction.

Michael Jackson and Quincy Jones are two people I'd like to have dinner with. I'd like to talk about Michael Jackson's album Thriller. What was the creative process and mindset that went into making that album? What emotions did Michael experience while creating it? And what the hell were you thinking, Quency!!? Seriously. I'm going to need some of that!

When I begin a new book, I try to consider the setting, culture, and pace. Also, whether it's something from the future or the past. I'm considering emotions, characters, and the big problem that needs to be solved. I want the main character to be the person who is least likely to be able to solve "specific" problems. I enjoy writing stories about people who are underdogs. However, the character must overcome some big obstacles in order to solve the problem.

I always write first thing in the morning. I believe I am more creative at that time. It's strange that I can't seem to write in the evenings!! If I can't think of anything interesting to write, I go back and read what I wrote the day before. That usually adds a little spice to my writing!

I'm nearing the end of Zarya Episode 2. And I'm having a great time writing this one!!