James Calbraith - Fantasy Author Who Writes Best While Traveling The World
Posted on 21st of April, 2016 by Naomi Bolton

James Calbraith is a British writer who was born and raised in communist Poland, but his imagination thrived on a literary diet of Lord of the Rings and other fantasy books. His passion for fantasy shows in his work and his debut historical fantasy book, "The Shadow of the Black Wings," reached ABNA semi-finals and hit the Historical Fantasy and Alternate History bestseller lists on Amazon US & UK. Calbraith is currently working on the 7th book in his epic The Year of the Dragon Saga. In this interview, we chat about the series, how much his travels influence his work and how he would have liked to have a pint of dark ale with the Oxford Inklings

Some of our readers might not have read your books. What is The Year of The Dragon Saga About?

A boy, his dragon, and some unlikely friends he meets in a far-off land…

The main setting is a fantasy version of 19th century Japan, at the very moment when it opens up to the Western world. Bran is a young Welsh dragon rider, travelling on a military mission with his father. He ends up in Yamato – a land of magic and Spirits where no Westerners (and no dragons) are allowed. He befriends two local girls – Nagomi, a shrine maiden, tormented by visions of the future, and Sato, the only heir to the school of wizard-samurai. Together, they become entangled in a web of violent intrigues involving the Yamato court, local rebels and several Western powers.

There are dragons, wizards, warships, samurai, vampires, and some ninjas – even vampire ninjas, later on.

You love to travel - how do your travels influence the characters and worlds you create?

I wouldn’t have written any of my books if it wasn’t for the travels. Every major setting that I put into words, whether it’s Wales, China or Japan, I have to see with my own eyes first. If I can, I’ll go there again while writing new books. And I write best when I’m travelling. 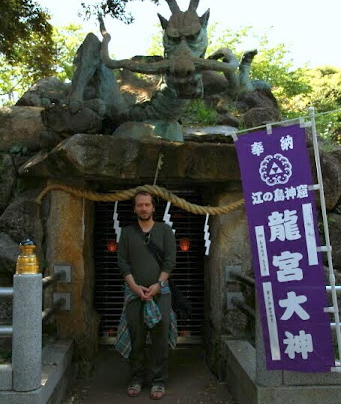 When did you decide to become a writer and what was the very first book you wrote about?

I don’t think there was a conscious decision ever made. Writing stories is one of the first things I consciously remember, and it was always fantasy or science-fiction – influenced by what I was reading as a kid. The first things I wrote were more hard sf, based on adventure writers from 60s and 70s like Asimov or Sheckley. I moved to fantasy much later, when I started reading authors like Le Guin – although Tolkien was always my first and greatest love.

The Year of the Dragon is described as "part Harry Potter, part Shogun" - why is that?

It’s a quote from one of my early reviewers. I think it’s because the book starts off in a familiar, Harry Potter-like setting: an ancient British school of magic - and concerns a young boy-mage, although he’s no “Chosen One” by any stretch of imagination – quite the contrary, apart from some riding skills and a famous father, there’s nothing extraordinary about him.

It soon, however, turns into a story of a Westerner in Japan – a trope told masterfully in James Clavell’s “Shogun” (and the TV series I’ve watched time and time again as a kid) or, more recently, Tom Cruise’s “Last Samurai”. 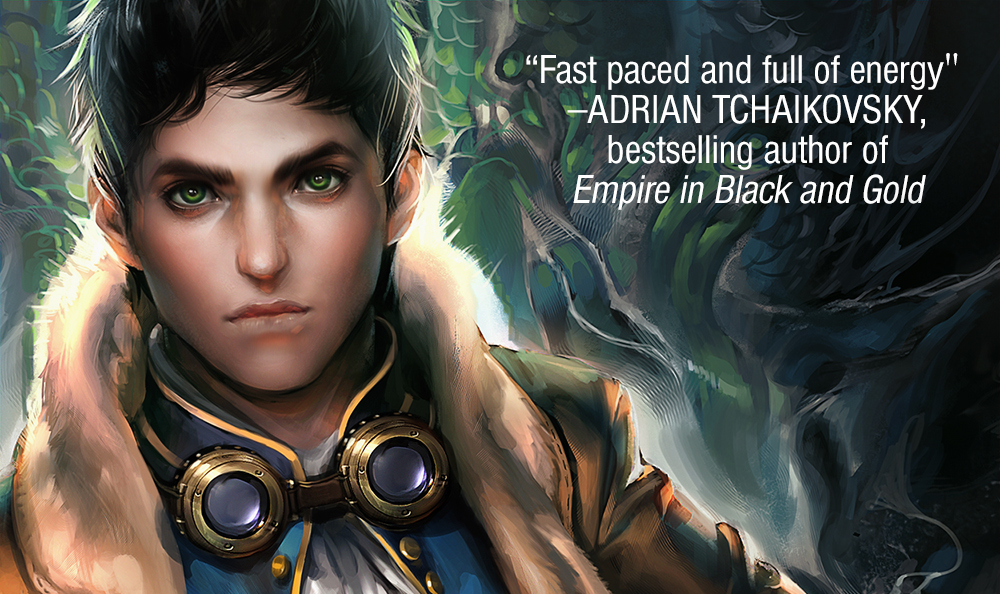 If you could have lived in the world you created for the Year of the Dragon, who would you have been and why?

It’s going to be a boring answer, but - a Yamato nobleman in Kiyo, the fictional counterpart of Nagasaki. Under the peaceful rule of the Tokugawas I’d have little worries, apart from having to deal with an occasional typhoon or tsunami… I could eat all the Japanese food I’d want, live in a beautiful mansion, and if I fancied, I’d have access to the latest in Western or Chinese news and technologies through the trade outposts in the city harbour…

Actually, it’s also who I would have liked to be in the real world, too.

Which famous person (living or dead) would you want to have a drink with, and what would you drink?

This one’s a no-brainer. A pint of dark ale at the Eagle & Child with Tolkien, C.S. Lewis and the rest of the Inklings gang. 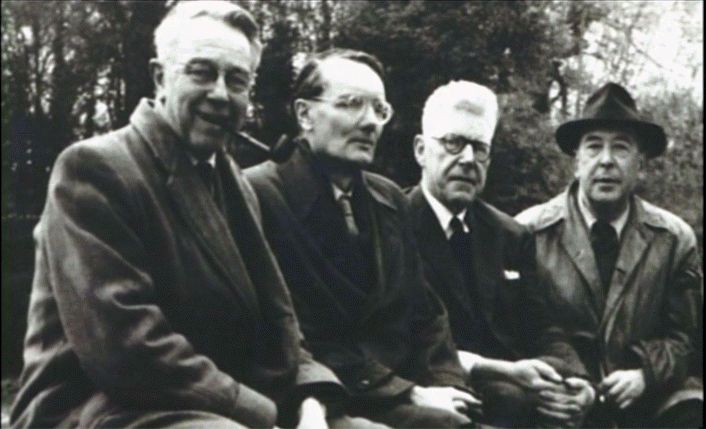 You grew up in Poland. How was the transition to writing for an English audience?

I grew up reading a lot of books in English, listening to and watching BBC, and I was on the internet since the late 90s, so the language wasn’t a problem, especially after I’ve moved to UK. At some point I realized it was easier for me to write in English than Polish, because so much of the written word I surrounded myself with was in that language.

I had plenty of good advice from my first editor, to whom I presented the manuscript – I discovered some quirks of creative writing in English I was not aware of, especially the peculiar sort of grammar you have to use when writing a novel, as opposed to an article or a blog post. This one was tricky, as you can’t pick that sort of thing from just reading books, the brain skips over grammar when captivated by the story.

What genre of books do you enjoy reading? Do you limit yourself to Fantasy books?

I actually don’t read as much Fantasy as I probably should… Lately I stick to reading non-fiction – mostly history. I devour history of any country and any period. I think my next book will be a straight historical fiction.

How do you keep track of the plot and the twists in an epic 6-book series such as the Year of the Dragon?

I wrote the first three volumes in one go, so that one was easy to keep track of. Since then, I keep general notes on the overarching plot of the series, lists of characters and chronology of major events. Calendar is very important – I have every scene tracked to a day. Before I start working on a new book, I write down a general outline of events, although this rarely matches the actual plot in the end – I have created characters who are stronger than me and tend to do what they want. :-) 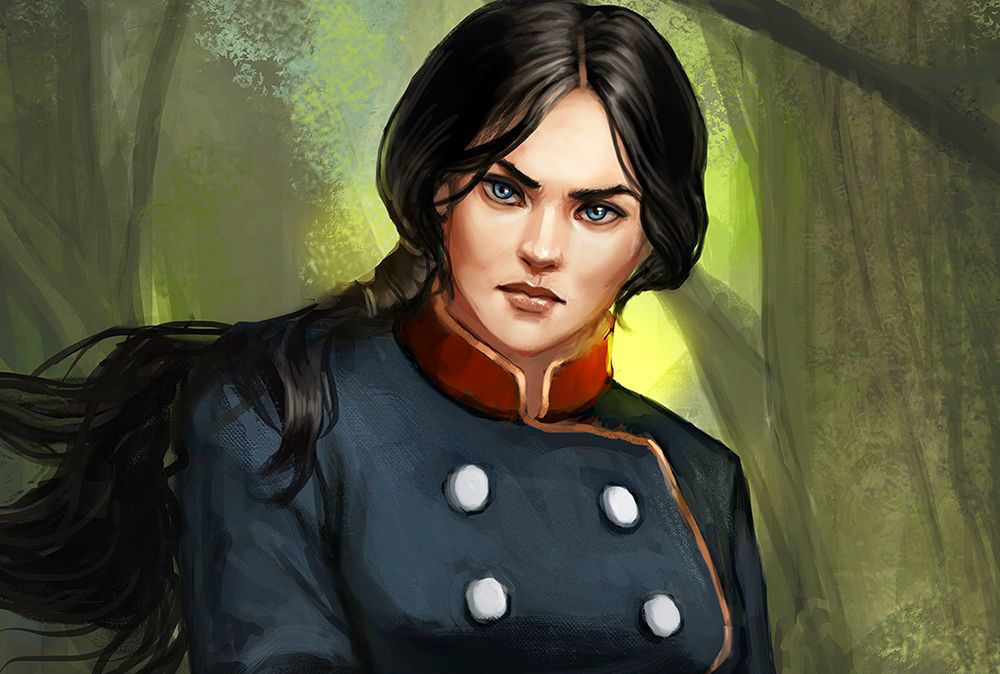 How many more books can we expect for the Year of the Dragon? Do you have anything planned once the series is finished?

I have just finished preparing book 7 for a May release, and now I’m focused on writing book 8 which will be the final in the series. I have plans for a historical fiction trilogy next, something in vein of Bernard Cornwell, set in post-Roman Britain (without King Arthur!)

Where can readers discover more of your books or interact with you?

It’s best if they go to my website, at http://jamescalbraith.com. I have a blog there with all the news, and the information about the books, as well as my social media addresses. I’m probably most active on Facebook and Twitter - https://www.facebook.com/jcalbraith and https://twitter.com/eadingas - right now.