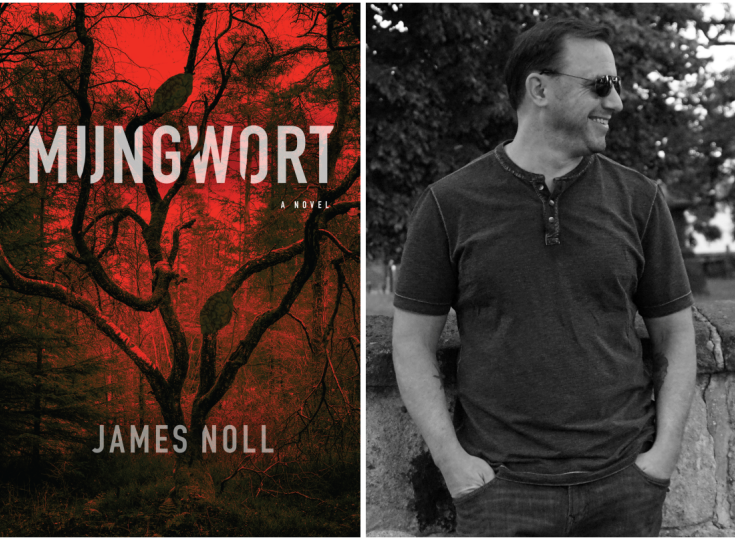 James Noll has worked as a sandwich maker, a yogurt dispenser, a daycare provider, a video store clerk, a daycare provider (again), a summer camp counselor, a waiter, a prep. cook, a sandwich maker (again), a line cook, a security guard, a line cook (again), a waiter (again), a bartender, a librarian, and a teacher. Somewhere in there he played drums in punk rock bands, recorded several albums, and wrote dozens of short stories and a handful of novels. As our Author of the Day, he tells us all about his book, Mungwort.

Please give us a short introduction to what Mungwort is about.

Mungwort is the story of Cece Stone, a young woman who has returned to Spotsylvania, Virginia to find her estranged father, who has disappeared. She ends up working at the last place he was seen: Lilith’s Farm. Strange things begin to happen. The fence that borders the property seems like it’s under attack from the forest. Toxic fungus balls keep popping up on the tree trunks. And one by one, Cece’s fellow workers go missing.

What inspired you to write about a farm that is attacked by a forest?

This is going to get a bit labyrinth here, but I’ll try to straighten it out as best as I can.

Anyway, at the heart of the first two was a flower called the helicodicerous muscivorous, or the dead horse arum. It’s the flower that smells like a rotten corpse when it blooms. The main character of the short story and short film uses it to cover up the smell of her victims.

Chip and I expanded that idea into a farm setting for the feature, but the idea of the forest turning on humans didn’t come about until the fourth or fifth pass. Once we realized that Lilith and her henchmen were conducting weird experiments with flora and fauna, I decided that the forest around the farm would suffer some kind of unforeseen, cool, science-fictiony consequences and start to turn on the people who are poisoning it.

Tell us more about Cece. What makes her tick?

At the beginning of the novel, Cece is driven by a single goal: to locate her father. She sees herself as strong and independent, and she really doesn’t want to have to rely on anybody else or let them into her orbit. However, as she spends more time on the farm and makes friends (and some enemies), she discovers that she wants to help them get out of this murder farm. Her friends, at least.

You’ve worked in a bunch of different environments in your life. How has this influenced your writing?

Ah, yes. All of those minimum wage jobs and the kitchen/restaurant work I did when I was younger. I’ll use the restaurant work as an example, but it applies to a wide range of low-wage jobs.

Being a cook or a dishwasher or a waiter is pretty hard work. You’re on your feet all day, hauling five-gallon buckets of soup all over the kitchen, or toting plates of food out to customers, or scrubbing burned food off of pots and pans, or dragging trash out to the dumpster, breaking down boxes, cleaning out the walk-in refrigerators, scraping the grill, mopping the floor, vacuuming the dining room, etc… Plus, you’re assailed on all fronts. Customers make demands or get irate, people get drunk at the bar, managers come down on you for minor mistakes, owners show up out of nowhere and… act like owners. It creates a kind of bond between the servers, bartenders, and kitchen staff, a sense that you’re all in this together, an us vs. them mentality.

That definitely factored into the kind of work everyone on the farm had to do. It is grueling, relentless, and physically exhausting. They have to deal with the horrible heat and humidity, the tediousness of the tasks, and they’re constantly being dragged down by their supervisors. On top of all of that, they do the same thing every day and never seem to make any progress.

It also factors into the relationships between Cece and everybody else on Lilith’s Farm. They are a united front against the work, the toil, and the working conditions. And every crew has an incompetent Rufus, a lovable Ben, a horrid Harlow, and, of course, there will always be awful supervisors like Warner and Mueller.

I’m also a musician! I’ve been in bands my entire life, and I write and produce my own music and the music of the bands I’m in. Since I have all that gear, I produce my own audiobook versions of the fiction I write. I also do podcast editing as a side-hustle. My full-time gig is teaching, though. I’ve taught High School English for about twenty years. So, yeah, I wear a lot of hats.

What was your greatest challenge when writing Mungwort?

There were a few. Initially, the challenge was co-writing the script with Chip. I’d never worked with a writing partner before, and we spent a lot of hours on the phone hashing out plot points, discussing character motivations, and world building.

I never intended to adapt the script into a novel, but when we finished, I liked what we’d done so much that I couldn’t resist. Fortunately, the dialog and scenes were nailed down, but a script is only about 110 pages long, and description lines are in present tense and extremely sparse. Novels require more tone, voice, and detail, and novelists can use more of a variety of devices and strategies to create their work. Finally, when I finished my first pass of adopting it into a novel, it only came to about 30,000 words, which is forty to fifty thousand words shy of an acceptable novel.

So that was the next challenge: adapting the screenplay into a novel.

I spent another two or three months building out the world even further, adding chapters, scenes, and B-stories, making sure the book read like a book and not a screenplay. That was challenging not just because I had to write so much more but because I had to make sure I had to do so without ruining the tight story we already developed in the script.

Mungwort also has surprisingly funny moments - why did you decide to include humor into the story?

Just like good comedy has some serious moments, good horror/suspense/thriller stories have light moments. It balances all of the tension and darkness. It doesn’t have to be total zaniness, just something to give the reader some relief. Horror stories are already enormous exaggerations of our fears and anxieties, and sometimes if it takes itself too seriously, the whole thing ends up feeling a little ridiculous. Humor allows both the characters and the audience to take a step back and take a deep breath and say “can you believe this shit?”

Cool cover - tell us more about how that came about.

I liked the idea of a sinister forest with some malformed trees in it.

Robin Vuchnich designed it for me. I took some pictures of the inspiration for the mungwort balls that were growing on the tree behind my house, and she incorporated it into the cover design.

Interestingly enough, I thought the stuff growing on my trunk was fungus, but it turns out that it's burl, a kind of wood deformity. It’s highly sought after by woodworkers because of the cool patterns it makes.

In Mungwort, one of the first characters we meet other than Cece is a woman named Karen Boemer. She’s a headhunter for Lilith’s farm. I don’t want to give away what happens in the first chapter, but what she does at the end wasn’t planned at all. And a character that pops up later on in the book, Amana, definitely didn’t behave the way I wanted her to. It lead to some pretty cool suspense and tension.

Readers say that your descriptions are so vivid that it feels like you are watching a movie. How did you pull this off?

It’s super-flattering to read those reviews. I think it had to do with the fact that I adapted the book from a script. In a script, each scene has to matter, has to push the plot forward, has to have a turn. Since that was already in place by the time I drafted the novel, all I had to do was show it, only instead of using a camera, I used words.

It also helps that I live where the novel is set, so I’ve experienced those awful Virginia heatwaves my entire life. When I was in high school, I did 2-a-day football practices in late summer. I mowed lawns in the middle of July. My freshman dorm in college had no AC, and the first semester started in the middle of August. Unfortunately, describing the misery of working outside in 100-degree weather (with a heat index of 110-115) came naturally.

Do you plan out your books before you start writing?

I do now! In the fiction world, there are planners and pantsers. Planners detail their work down to the last word, and pantsers just kind of write and see where it goes. I used to be a full pantser until I started teaching and realized I couldn’t just tell my students to “write something” and expect it to work. So I learned structure, practiced it so I’d feel comfortable teaching it, taught it, and unsurprisingly, my work started to get better.

Now I consider myself a firm plantser—prior to the first draft, I plan out my work and make sure I hit the necessary beats along the arc. BUT if something cool hits me when I’m in the middle of the writing, if a character does something that wasn’t planned, or an interesting bit of irony presents itself, I’ll follow that idea as far as it needs to go. It might lead to longer drafts, but it’s always good to have too much at first. It’s easier to cut than it is to add.

I’m pretty boring when it comes to my writing habits. When I’m drafting a book or a short story, I make sure I write 1,000 words a day. Sometimes more, sometimes less. I squeeze it in in the afternoons when I get back from teaching and on the weekends.

I tend to write my short fiction in a journal then develop it on my laptop. I used to do the same thing with my novels, but I found that it’s just a time suck, so those are all written on my computer, from the rough draft to the final copy edit.

I’m planning out a seven-book series with Mungwort as its anchor. The idea is to write books based on characters I’ve already created in stories from two of my short story collections (Thirteen Tales and The Wounded, The Sick, & The Dead), and have them join forces. So far I have the draft of the arcs for books 2-3 done, and I’ll probably start working on book 2 in January.